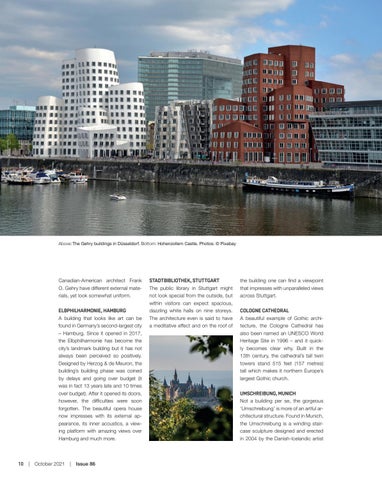 Canadian-American architect Frank O. Gehry have different external materials, yet look somewhat uniform. ELBPHILHARMONIE, HAMBURG A building that looks like art can be found in Germany’s second-largest city – Hamburg. Since it opened in 2017, the Elbphilharmonie has become the city’s landmark building but it has not always been perceived so positively. Designed by Herzog &amp; de Meuron, the building’s building phase was coined by delays and going over budget (it was in fact 13 years late and 10 times over budget). After it opened its doors, however, the difficulties were soon forgotten. The beautiful opera house now impresses with its external appearance, its inner acoustics, a viewing platform with amazing views over  Hamburg and much more.

STADTBIBLIOTHEK, STUTTGART The public library in Stuttgart might not look special from the outside, but within visitors can expect spacious, dazzling white halls on nine storeys. The architecture even is said to have a meditative effect and on the roof of

the building one can find a viewpoint that impresses with unparalleled views across Stuttgart. COLOGNE CATHEDRAL A beautiful example of Gothic architecture, the Cologne Cathedral has also been named an UNESCO World Heritage Site in 1996 – and it quickly becomes clear why. Built in the 13th century, the cathedral’s tall twin  towers stand 515 feet (157 metres) tall which makes it northern Europe’s  largest Gothic church. UMSCHREIBUNG, MUNICH Not a building per se, the gorgeous ‘Umschreibung’ is more of an artful architectural structure. Found in Munich, the Umschreibung is a winding staircase sculpture designed and erected in 2004 by the Danish-Icelandic artist