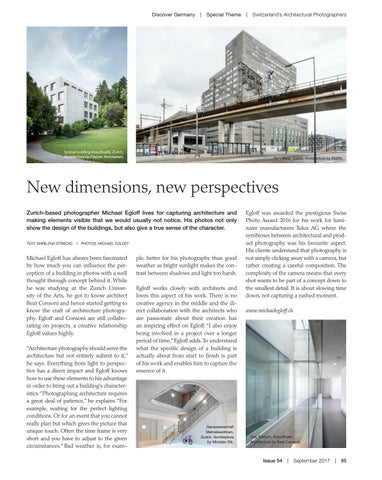 New dimensions, new perspectives Zurich-based photographer Michael Egloff lives for capturing architecture and making elements visible that we would usually not notice. His photos not only show the design of the buildings, but also give a true sense of the character. TEXT: MARILENA STRACKE  I  PHOTOS: MICHAEL EGLOFF

Michael Egloff has always been fascinated by how much you can influence the perception of a building in photos with a well thought through concept behind it. While he was studying at the Zurich University of the Arts, he got to know architect Beat Consoni and hence started getting to know the craft of architecture photography. Egloff and Consoni are still collaborating on projects, a creative relationship Egloff values highly. “Architecture photography should serve the architecture but not entirely submit to it,” he says. Everything from light to perspective has a direct impact and Egloff knows how to use these elements to his advantage in order to bring out a building’s characteristics. “Photographing architecture requires a great deal of patience,” he explains. “For example, waiting for the perfect lighting conditions. Or for an event that you cannot really plan but which gives the picture that unique touch. Often the time frame is very short and you have to adjust to the given circumstances.” Bad weather is, for exam-

ple, better for his photography than good weather as bright sunlight makes the contrast between shadows and light too harsh. Egloff works closely with architects and loves this aspect of his work. There is no creative agency in the middle and the direct collaboration with the architects who are passionate about their creation has an inspiring effect on Egloff. “I also enjoy being involved in a project over a longer period of time,” Egloff adds. To understand what the specific design of a building is actually about from start to finish is part of his work and enables him to capture the essence of it.

Egloff was awarded the prestigious Swiss Photo Award 2016 for his work for luminaire manufacturers Tulux AG where the symbioses between architectural and product photography was his favourite aspect. His clients understand that photography is not simply clicking away with a camera, but rather creating a careful composition. The complexity of the camera means that every shot wants to be part of a concept down to the smallest detail. It is about slowing time down, not capturing a rushed moment. www.michaelegloff.ch