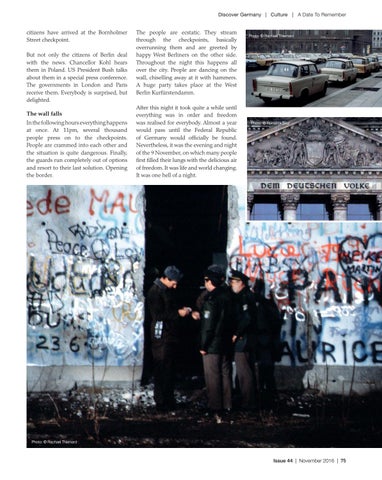 citizens have arrived at the Bornholmer Street checkpoint. But not only the citizens of Berlin deal with the news. Chancellor Kohl hears them in Poland. US President Bush talks about them in a special press conference. The governments in London and Paris receive them. Everybody is surprised, but delighted. The wall falls In the following hours everything happens at once. At 11pm, several thousand people press on to the checkpoints. People are crammed into each other and the situation is quite dangerous. Finally, the guards run completely out of options and resort to their last solution. Opening the border.

The people are ecstatic. They stream through the checkpoints, basically overrunning them and are greeted by happy West Berliners on the other side. Throughout the night this happens all over the city. People are dancing on the wall, chiselling away at it with hammers. A huge party takes place at the West Berlin Kurfürstendamm. After this night it took quite a while until everything was in order and freedom was realised for everybody. Almost a year would pass until the Federal Republic of Germany would officially be found. Nevertheless, it was the evening and night of the 9 November, on which many people first filled their lungs with the delicious air of freedom. It was life and world changing. It was one hell of a night.