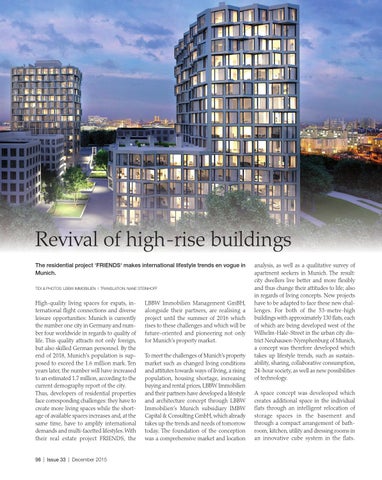 High-quality living spaces for expats, international flight connections and diverse leisure opportunities: Munich is currently the number one city in Germany and number four worldwide in regards to quality of life. This quality attracts not only foreign, but also skilled German personnel. By the end of 2018, Munich’s population is supposed to exceed the 1.6 million mark. Ten years later, the number will have increased to an estimated 1.7 million, according to the current demography report of the city. Thus, developers of residential properties face corresponding challenges: they have to create more living spaces while the shortage of available spaces increases and, at the same time, have to amplify international demands and multi-facetted lifestyles. With their real estate project FRIENDS, the

LBBW Immobilien Management GmBH, alongside their partners, are realising a project until the summer of 2016 which rises to these challenges and which will be future-oriented and pioneering not only for Munich’s property market. To meet the challenges of Munich’s property market such as changed living conditions and attitutes towards ways of living, a rising population, housing shortage, increasing buying and rental prices, LBBW Immobilien and their partners have developed a lifestyle and architecture concept through LBBW Immobilien’s Munich subsidiary IMBW Capital &amp; Consulting GmbH, which already takes up the trends and needs of tomorrow today. The foundation of the conception was a comprehensive market and location

analysis, as well as a qualitative survey of apartment seekers in Munich. The result: city dwellers live better and more flexibly and thus change their attitudes to life; also in regards of living concepts. New projects have to be adapted to face these new challenges. For both of the 53-metre-high buildings with approximately 130 flats, each of which are being developed west of the Wilhelm-Hale-Street in the urban city district Neuhausen-Nymphenburg of Munich, a concept was therefore developed which takes up lifestyle trends, such as sustainability, sharing, collaborative consumption, 24-hour society, as well as new possibilities of technology. A space concept was develeoped which creates additional space in the individual flats through an intelligent relocation of storage spaces in the basement and through a compact arrangement of bathroom, kitchen, utility and dressing rooms in an innovative cube system in the flats.