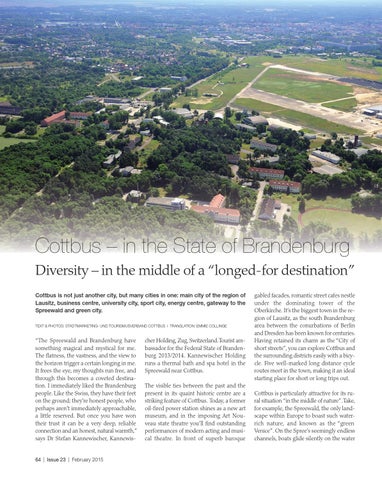 Cottbus – in the State of Brandenburg Diversity – in the middle of a “longed-for destination” Cottbus is not just another city, but many cities in one: main city of the region of Lausitz, business centre, university city, sport city, energy centre, gateway to the Spreewald and green city. TEXT & PHOTOS: STADTMARKETING- UND TOURISMUSVERBAND COTTBUS | TRANSLATION: EMMIE COLLINGE

“The Spreewald and Brandenburg have something magical and mystical for me. The flatness, the vastness, and the view to the horizon trigger a certain longing in me. It frees the eye, my thoughts run free, and through this becomes a coveted destination. I immediately liked the Brandenburg people. Like the Swiss, they have their feet on the ground; they’re honest people, who perhaps aren’t immediately approachable, a little reserved. But once you have won their trust it can be a very deep, reliable connection and an honest, natural warmth,” says Dr Stefan Kannewischer, Kannewis-

cher Holding, Zug, Switzerland.Tourist ambassador for the Federal State of Brandenburg 2013/2014. Kannewischer Holding runs a thermal bath and spa hotel in the Spreewald near Cottbus. The visible ties between the past and the present in its quaint historic centre are a striking feature of Cottbus. Today, a former oil-fired power station shines as a new art museum, and in the imposing Art Nouveau state theatre you’ll find outstanding performances of modern acting and musical theatre. In front of superb baroque

gabled facades, romantic street cafes nestle under the dominating tower of the Oberkirche. It’s the biggest town in the region of Lausitz, as the south Brandenburg area between the conurbations of Berlin and Dresden has been known for centuries. Having retained its charm as the “City of short streets”, you can explore Cottbus and the surrounding districts easily with a bicycle. Five well-marked long distance cycle routes meet in the town, making it an ideal starting place for short or long trips out. Cottbus is particularly attractive for its rural situation “in the middle of nature”.Take, for example, the Spreewald, the only landscape within Europe to boast such waterrich nature, and known as the “green Venice”. On the Spree’s seemingly endless channels, boats glide silently on the water