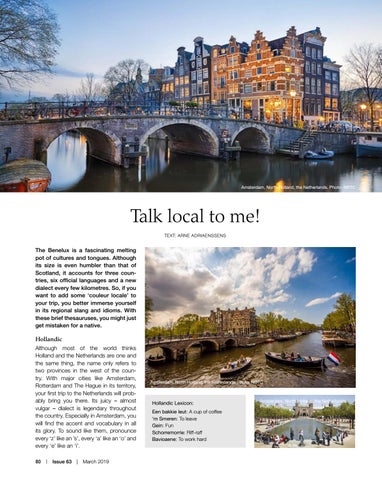 The Benelux is a fascinating melting pot of cultures and tongues. Although its size is even humbler than that of Scotland, it accounts for three countries, six official languages and a new dialect every few kilometres. So, if you want to add some ‘couleur locale’ to your trip, you better immerse yourself in its regional slang and idioms. With these brief thesauruses, you might just get mistaken for a native.

Hollandic Although most of the world thinks Holland and the Netherlands are one and the same thing, the name only refers to two provinces in the west of the country. With major cities like Amsterdam, Rotterdam and The Hague in its territory, your first trip to the Netherlands will probably bring you there. Its juicy – almost vulgar – dialect is legendary throughout the country. Especially in Amsterdam, you will find the accent and vocabulary in all its glory. To sound like them, pronounce every ‘z’ like an ’s’, every ‘a’ like an ‘o’ and every ‘e’ like an ‘i’. 80  |  Issue 63  |  March 2019