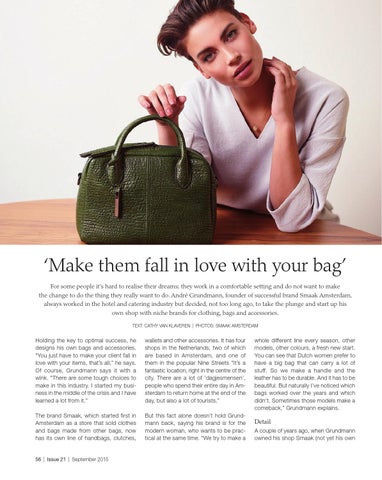 ‘Make them fall in love with your bag’ For some people it’s hard to realise their dreams; they work in a comfortable setting and do not want to make the change to do the thing they really want to do. André Grundmann, founder of successful brand Smaak Amsterdam, always worked in the hotel and catering industry but decided, not too long ago, to take the plunge and start up his own shop with niche brands for clothing, bags and accessories. TEXT: CATHY VAN KLAVEREN | PHOTOS: SMAAK AMSTERDAM

Holding the key to optimal success, he designs his own bags and accessories. “You just have to make your client fall in love with your items, that’s all,” he says. Of course, Grundmann says it with a wink. “There are some tough choices to make in this industry. I started my business in the middle of the crisis and I have learned a lot from it.”

wallets and other accessories. It has four shops in the Netherlands, two of which are based in Amsterdam, and one of them in the popular Nine Streets “It’s a fantastic location, right in the centre of the city. There are a lot of ‘dagjesmensen’, people who spend their entire day in Amsterdam to return home at the end of the day, but also a lot of tourists.”

The brand Smaak, which started first in Amsterdam as a store that sold clothes and bags made from other bags, now has its own line of handbags, clutches,

But this fact alone doesn’t hold Grundmann back, saying his brand is for the modern woman, who wants to be practical at the same time. “We try to make a

whole different line every season, other models, other colours, a fresh new start. You can see that Dutch women prefer to have a big bag that can carry a lot of stuff. So we make a handle and the leather has to be durable. And it has to be beautiful. But naturally I’ve noticed which bags worked over the years and which didn’t. Sometimes those models make a comeback,” Grundmann explains.

Detail A couple of years ago, when Grundmann owned his shop Smaak (not yet his own