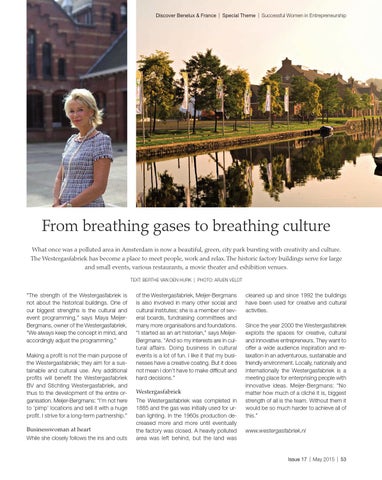 From breathing gases to breathing culture What once was a polluted area in Amsterdam is now a beautiful, green, city park bursting with creativity and culture. The Westergasfabriek has become a place to meet people, work and relax. The historic factory buildings serve for large and small events, various restaurants, a movie theater and exhibition venues. TEXT: BERTHE VAN DEN HURK | PHOTO: ARJEN VELDT

Businesswoman at heart While she closely follows the ins and outs

of the Westergasfabriek, Meijer-Bergmans is also involved in many other social and cultural institutes; she is a member of several boards, fundraising committees and many more organisations and foundations. “I started as an art historian,” says MeijerBergmans. “And so my interests are in cultural affairs. Doing business in cultural events is a lot of fun. I like it that my businesses have a creative coating. But it does not mean I don’t have to make difficult and hard decisions.”

Westergasfabriek The Westergasfabriek was completed in 1885 and the gas was initially used for urban lighting. In the 1960s production decreased more and more until eventually the factory was closed. A heavily polluted area was left behind, but the land was

cleaned up and since 1992 the buildings have been used for creative and cultural activities. Since the year 2000 the Westergasfabriek exploits the spaces for creative, cultural and innovative entrepreneurs. They want to offer a wide audience inspiration and relaxation in an adventurous, sustainable and friendly environment. Locally, nationally and internationally the Westergasfabriek is a meeting place for enterprising people with innovative ideas. Meijer-Bergmans: “No matter how much of a cliché it is, biggest strength of all is the team. Without them it would be so much harder to achieve all of this.” www.westergasfabriek.nl