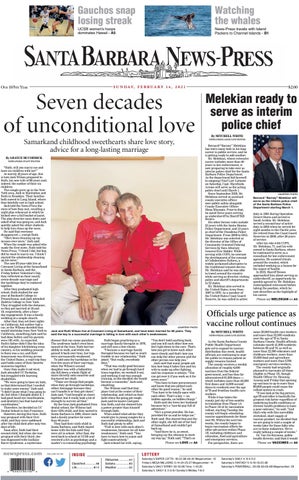 News-Press travels with Island Packers to Channel Islands - B1

Jack and Ruth Wilson live at Covenant Living at Samarkand, and have been married for 68 years. They said the key to a successful marriage is falling in love with each other’s weaknesses.

disease that can cause paralysis. The syndrome hadn’t even been named at the time. Ruth lost her ability to walk, and while she gained it back over time, her legs were permanently weakened. To add onto the hardships in the first few years of their marriage, when the Wilson’s second daughter was with a babysitter, she fell down a whole flight of stairs directly onto concrete and fractured her skull. “Those are things that people, when they go through hardships, either disengage because they can’t handle it or they get closer,” Jack said. “God brought us closer together, but it really took a lot of strength to survive all that.” By the time Jack graduated from dental school, the Wilsons had their fifth child, and they moved to Santa Barbara in 1960, where Jack had a family practice for more than 40 years. They had their sixth child in Santa Barbara, and Ruth stayed home with the kids until they were all in school. After that, she went back to school at UCSB and received a BA in psychology and a master’s in counseling psychology.

“You don’t hold anything back, and you tell each other how you feel right down to the core. That’s how you get to know each other more closely and that’s how you can help the other person and the other person can help you.” Jack said that many people ask him how long it takes him and his wife to make up after fighting, and his response is always, “You can get over it if you work on it for seven years.” “You have to have perseverance and know that you picked each other for good reason,” he said. “You have to be totally open with each other. That’s a key — no hidden agenda, no hidden things.” Ruth said she loves her husband because he’s a “can-do guy full of adventure.” “He’s a great provider. He has provided for us and he helps me,” Ruth said. She shared that just the other night, she fell out of her bed at Samarkand and couldn’t get back up. “And there he is, so sweet, bringing me the ottomon to work my way up,” Ruth said. “That’s so Please see LOVE on A6

duty in 1991 during Operation Desert Storm and served in Saudi Arabia. Mr. Melekian served a second tour of active duty in 2003 when he served for eight months in the Pacific area. He retired from the Coast Guard Reserves in 2009, after 26 years of service. After his role with COPS, Mr. Melekian, 71, and his wife moved to Santa Barbara, where he continued to serve as a consultant for law enforcement agencies. He assisted clients around the country, which included working as a liaison for the mayor of Seattle. In 2015, Sheriff Brown approached him about serving as undersheriff, an opportunity he quickly agreed to. Mr. Melekian contemplated retirement before taking the position, which he now describes as the highlight of his career. Please see melekian on A3

As the Santa Barbara County Public Health Department gets set to expand its vaccine distribution this week, health officials are continuing to urge the public to remain patient as supply remains limited. The county receives a weekly allocation of roughly 6,000 vaccines from the federal government, and has thus far administered 61,000 doses — which includes more than 45,500 first doses and 14,000 second doses to residents over the age of 75 and frontline health care workers. While it has taken the county just shy of two months to transition from Phase 1A to Phase 1B of its vaccination rollout, starting Tuesday the county will begin scheduling vaccine appointments for those over 65. Within the next two weeks, the county hopes to begin vaccination efforts for other job sectors within Phase 1B, including childcare and education, food and agriculture and emergency services. For perspective, there are

some 26,000 health care workers and more than 32,000 residents over the age of 75 in Santa Barbara County. Health officials estimate nearly 41,000 residents between 65 and 74, as well as more than 22,500 educators and childcare workers, more than 33,000 food and agriculture workers and more than 5,700 emergency services workers. The county had originally planned to vaccinate all those eligible in Phase 1B, though Health Officer Dr. Henning Ansorg said Friday that opening up vaccines to up to more than 80,000 people could cause the rollout system to crash. “If you look at the big picture, age 65 and older is basically the greatest risk factor regardless of underlying health conditions or chronic health problems to have a poor outcome,” he said. “And that’s why with this incredibly stretched, short supply of vaccine product, we decided that we are going to wait a couple of weeks later for those folks who are in these industries. We’re really talking a couple of weeks.” Dr. Van Do-Reynoso, public health director, said that it would Please see vaccines on A6

Ruth began practicing as a marriage family therapist in 1976, and still sees a few clients. “I became a marriage family therapist because we had so much trouble in our relationship,” Ruth joked. “But really, everybody does.” “That was really good because when we had to go through hard times together, we worked it out, and working it out was enough training, so she decided she would become a counselor,” Jack said, chuckling. The Wilsons said that they place God at the center of their relationship, and relied on their faith when the going got rough. Jack said he knows God gave him Ruth, and she showed him a power greater than himself through faith. When asked what advice they would give to young couples for a successful relationship, Jack and Ruth had plenty to offer. “Fall in love with each other’s weaknesses, because we all have weaknesses,” Ruth said. “You have to learn how to argue and fight constructively.” Jack echoed his wife, saying,

By MITCHELL WHITE Bernard “Barney” Melekian has worn many hats in his long career in public service, and he is getting ready to add another. Mr. Melekian, whose extensive career includes more than 40 years in law enforcement, is now preparing to take over as interim police chief for the Santa Barbara Police Department. As the department bid farewell to outgoing Chief Lori Luhnow on Saturday, Capt. Marylinda Arroyo will serve as the acting police chief until March 1. Since September 2018, Mr. Melekian served as assistant county executive officer over public safety alongside County Executive Officer Mona Miyasato. Prior to that, he spent three years serving as undersheriff to Sheriff Bill Brown. His other former roles include 23 years with the Santa Monica Police Department, and 13 years as chief of the Pasadena Police Department. From 2009 to 2013, Mr. Melekian was selected as the director of the Office of Community Oriented Policing Services by then Attorney General Eric Holder. While serving with COPS, he oversaw the development of the concept of Collaborative Reform, a widely acclaimed alternative to the traditional consent decree. Mr. Melekian said he was able to travel around the country while serving as director, visiting police and sheriff’s departments in 32 states. Mr. Melekian also served in the United States Army from 1967 to 1970. As a member of the United States Coast Guard Reserve, he was called to active

“Ruth, will you marry me and have six children with me?” At merely 18 years of age, this is how Jack Wilson proposed to Ruth, his now wife of 68 years and, indeed, the mother of their six children. The couple grew up in the New York area, Jack in Manhattan and Ruth in Brooklyn. Their families both moved to Long Island, where they fatefully met in high school. Jack told the News-Press the story of how they met, recalling a night play rehearsal in which he kicked over a full bucket of paint. The play director came down and asked what was going on, and Jack quickly asked the other students to help him clean up the mess. He said that everyone disappeared — except Ruth. “She’s been cleaning up my messes ever since,” Jack said. When the couple was asked who made the first move, Ruth told the News-Press, “I think I did, but boy, did he want to marry me. I think I started the relationship cleaning up his mess.” The now 87-year-olds live at Covenant Living at the Samarkand in Santa Barbara, and the Friday before Valentine’s Day, they reflected on their nearly seven-decade marriage and the hardships they’ve endured together. After they graduated high school, Ruth studied for one year at Bucknell College in Pennsylvania, and Jack attended Hofstra College in New York. They struggled with the distance, so they got married at 18 and 19, respectively, after a fourday engagement. It was a family wedding at a simple church. After that, they set their sights on California, but neither had a car, so the Wilsons decided they would hitchhike from New York to California, something Jack said he had done before and his parents were OK with. As expected, Ruth’s father didn’t like the idea of his daughter hitchhiking cross country, so his wedding present to them was a car, and their honeymoon was driving across the United States, a road trip they said holds some of their favorite memories together. Once they made it out west, Jack attended UC Berkeley, but struggled with learning disabilities. “We were going to have six kids, so that determined that I needed to make some money,” Jack said. “I didn’t know what I was going to do, but when I thought about it, I had good hand-eye coordination, and dentistry has that hand-eye coordination.” Therefore, he decided on UC Dental School in San Francisco. However, during this time, Ruth was pregnant with their first child, and they were saddened after the child died after only two days of life. Soon after, Ruth had their second child, but when she was pregnant with their third, she was diagnosed with GuillainBarre Syndrome, a mysterious