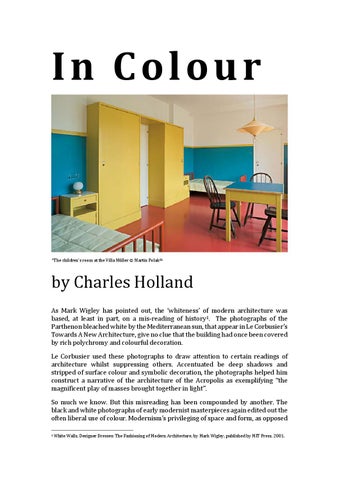 ^The children's room at the Villa Müller © Martin Polak2b

by Charles Holland As Mark Wigley has pointed out, the ‘whiteness’ of modern architecture was based, at least in part, on a mis‐reading of history1. The photographs of the Parthenon bleached white by the Mediterranean sun, that appear in Le Corbusier’s Towards A New Architecture, give no clue that the building had once been covered by rich polychromy and colourful decoration. Le Corbusier used these photographs to draw attention to certain readings of architecture whilst suppressing others. Accentuated be deep shadows and stripped of surface colour and symbolic decoration, the photographs helped him construct a narrative of the architecture of the Acropolis as exemplifying “the magnificent play of masses brought together in light”. So much we know. But this misreading has been compounded by another. The black and white photographs of early modernist masterpieces again edited out the often liberal use of colour. Modernism’s privileging of space and form, as opposed 1

to surface and decoration, was achieved at least partially by the suppression of other aspects of its character. Max Risselada’s book Raumplan versus Plan Libre2 includes photographs of specially constructed models of interiors by both Le Corbusier and Adolf Loos. These models attempt to depict the original materials and colour schemes employed by the architects, with, in Loos’ case, some mildly shocking results. Both used colour liberally, but Loos’ interiors are saturated in it: buttercup yellow window frames, marine blue woodwork, deep red dado‐rails and pea‐green carpets. Much of Loos’ early work was transitory: bar and shop interiors along with apartments for the wealthy Viennese bourgeoisie. Many of these interiors are now lost, either demolished or significantly remodelled, so the scale reconstructions in Raunplan versus Plan Libre are all we have to record them in detail. Without them we may have continued to believe that Loos was an austere, proto‐modernist intent on banishing all frippery and decoration from his architecture. In his essay, The Principle of Cladding3, Loos has this to say about the use of colour: “Wood may be painted any colour except one – the colour of wood. The principle of cladding forbids the cladding material to imitate the colouration of the underlying material”. He goes on to put forward a brief history of colour in architecture: “The Middle Ages painted wood bright red for the most part, the Renaissance blue; the Baroque and Rococo painted interiors white, exteriors green”. Like many of Loos’ statements, these strictures seem simultaneously ridiculous and perfectly good sense. As far as I am aware though, he doesn’t mention colour again. And neither does anyone else. Loos’ supposed removal of decoration along with his invention of the Raumplan are seen as his lasting legacies. His tendency to employ the occasional classical frieze and his exacting focus on craftsmanship are seen as hangovers from an earlier era, a set of concerns that modernism would soon shed entirely. I have yoked Le Corbusier and Loos together but their use of colour is very different and, what’s more these differences exemplify the differences in their architecture. Le Corbusier uses colour in a painterly way. That is, in the same way that he uses it in his paintings. It defines objects and planes and draws attention to the differences between them: a grey column in front of a red wall for instance. It seems an elementally modernist sensibility, a desire for clarity of communication and the definition of elements: walls are walls, ceilings are ceilings and never the twain shall meet, or at least not as long as there is a shadow gap between them. Loos’ colour sensibility is very different and for very specific reasons. Loos uses colour like a decorator. He splashes it all over. It covers surfaces, delineates

The Principle of Cladding, essay by Adolf Loos, reproduced in Raumplan versus Plan Libre.

volumes and saturates space. Loos’ colour is all enveloping and immersive. It uses high contrast but not to draw attention to specific objects but to more clearly create differences in mood and intensity of experience. The children’s playroom in the Villa Muller for instance is a riot of colour; blue and yellow furniture sits on a terracotta coloured floor with red‐lacquered radiators. Not insignificantly this room looks like what it is: a nursery. Loos’ architecture is undoubtedly more conservative than Le Corbusier’s. It retains aspects of familiar room layouts and traditional domestic planning. His use of colour reinforces this to some extent, emphasising each room as different from its neighbour. Space is not free flowing and endless but bounded and specific to the requirements of use. Like most things with Loos though, this seeming conservatism deliberately expresses the schism between tradition and modernity. Loos’ invention of the Raumplan and the complex architectural promenade that was its consequence also threatened to shatter the stability of the room entirely. Colour is used, at least partially, to glue it back together. The study alcove in the Moller House only has three enclosing walls for example, all painted in turquoise. The fourth wall is absent, the room’s open side acting as an extension of the major route through the building. But a sense of enclosure is still suggested by a flying beam, painted the same signal red as the other architraves and mouldings, which implicitly completes the ‘room’. In effect, bits of traditional decoration become disembodied, removed from the supporting wall and used to suggest traditional spatial enclosures. Space is defined and bounded, but it is also fragmented and unstable. His apartment for Leo Brummel contains perhaps his most extraordinary colour scheme of all. The ceiling and the top section of the walls are painted a bright yellow. The skirtings and cupboards are vermillion red while the architraves and lower sections of wall are matt black. The carpet is pea green. Colour here not only creates mood and ambience but is also deeply involved in the creation of boundaries: the boundaries between spaces and moods, people and things, men and women. Loos’ interiors are nothing if not symbolically charged. Loos never mentions any of this, but other people do. Beatriz Colomina has written of the plays of gender and sexual politics enshrined in Loos’ interiors4. Mostly this is constructed spatially, although the choice of materials plays a part. Colour though is intrinsic to Loos’ symbolic ordering organisation of space. Sometimes it is the only aspect of the room that is conventional or familiar. It is a temporary source of comfort then, the best that Loos felt he could offer. Ultimately Loos’ own codifications of colour – yellow = feminine, black and red = masculine, for example – are less interesting than the manner in which he applies it. In The Principle of Cladding, Loos manages to make painting a surface an issue of honesty and ethics. But his honesty is of a complex kind. A faithfulness to effect is as important as a faithfulness to materials or to structural logic. Paint, thick glossy paint, is for Loos a material, a kind of cladding. It has material value and 4 The Split Wall: Domestic Voyeurism, by Beatriz Colomina essay in Sexuality and Space, published by Princeton Architectural Press.

psychological impact. It is not a depthless plane. It is matter. It may be barely millimetres thick, but experientially it is deep. 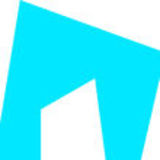 Charles Holland of Ordinary Architecture explores Adolf Loos' use of colour in relation to his notions of material integrity and of his spat...

Charles Holland of Ordinary Architecture explores Adolf Loos' use of colour in relation to his notions of material integrity and of his spat...