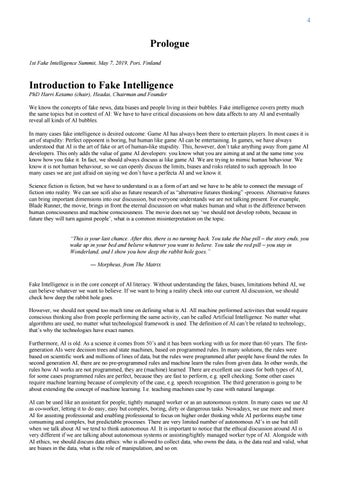 Introduction to Fake Intelligence PhD Harri Ketamo (chair), Headai, Chairman and Founder We know the concepts of fake news, data biases and people living in their bubbles. Fake intelligence covers pretty much the same topics but in context of AI: We have to have critical discussions on how data affects to any AI and eventually reveal all kinds of AI bubbles. In many cases fake intelligence is desired outcome: Game AI has always been there to entertain players. In most cases it is art of stupidity: Perfect opponent is boring, but human like game AI can be entertaining. In games, we have always understood that AI is the art of fake or art of human-like stupidity. This, however, don’t take anything away from game AI developers. This only adds the value of game AI developers: you know what you are aiming at and at the same time you know how you fake it. In fact, we should always discuss ai like game AI. We are trying to mimic human behaviour. We know it is not human behaviour, so we can openly discuss the limits, biases and risks related to such approach. In too many cases we are just afraid on saying we don’t have a perfecta AI and we know it. Science fiction is fiction, but we have to understand is as a form of art and we have to be able to connect the message of fiction into reality. We can see scifi also as future research of as “alternative futures thinking” -process. Alternative futures can bring important dimensions into our discussion, but everyone understands we are not talking present. For example, Blade Runner, the movie, brings in front the eternal discussion on what makes human and what is the difference between human consciousness and machine consciousness. The movie does not say ‘we should not develop robots, because in future they will turn against people’, what is a common misinterpretation on the topic. “This is your last chance. After this, there is no turning back. You take the blue pill – the story ends, you wake up in your bed and believe whatever you want to believe. You take the red pill – you stay in Wonderland, and I show you how deep the rabbit hole goes.” — Morpheus, from The Matrix

Fake Intelligence is in the core concept of AI literacy. Without understanding the fakes, biases, limitations behind AI, we can believe whatever we want to believe. If we want to bring a reality check into our current AI discussion, we should check how deep the rabbit hole goes. However, we should not spend too much time on defining what is AI. All machine performed activities that would require conscious thinking also from people performing the same activity, can be called Artificial Intelligence. No matter what algorithms are used, no matter what technological framework is used. The definition of AI can’t be related to technology, that’s why the technologies have exact names. Furthermore, AI is old. As a science it comes from 50’s and it has been working with us for more than 60 years. The firstgeneration AIs were decision trees and state machines, based on programmed rules. In many solutions, the rules were based on scientific work and millions of lines of data, but the rules were programmed after people have found the rules. In second generation AI, there are no pre-programmed rules and machine learn the rules from given data. In other words, the rules how AI works are not programmed, they are (machine) learned. There are excellent use cases for both types of AI, for some cases programmed rules are perfect, because they are fast to perform, e.g. spell checking. Some other cases require machine learning because of complexity of the case, e.g. speech recognition. The third generation is going to be about extending the concept of machine learning. I.e. teaching machines case by case with natural language. AI can be used like an assistant for people, tightly managed worker or as an autonomous system. In many cases we use AI as co-worker, letting it to do easy, easy but complex, boring, dirty or dangerous tasks. Nowadays, we use more and more AI for assisting professional and enabling professional to focus on higher order thinking while AI performs maybe time consuming and complex, but predictable processes. There are very limited number of autonomous AI’s in use but still when we talk about AI we tend to think autonomous AI. It is important to notice that the ethical discussion around AI is very different if we are talking about autonomous systems or assisting/tightly managed worker type of AI. Alongside with AI ethics, we should discuss data ethics: who is allowed to collect data, who owns the data, is the data real and valid, what are biases in the data, what is the role of manipulation, and so on. 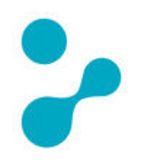