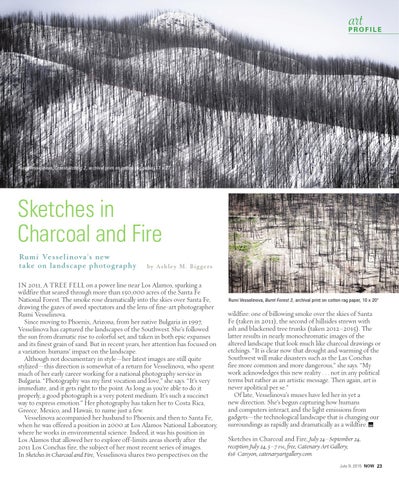 IN 2011, A TREE FELL on a power line near Los Alamos, sparking a wildfire that seared through more than 150,000 acres of the Santa Fe National Forest. The smoke rose dramatically into the skies over Santa Fe, drawing the gazes of awed spectators and the lens of fine-art photographer Rumi Vesselinova. Since moving to Phoenix, Arizona, from her native Bulgaria in 1997, Vesselinova has captured the landscapes of the Southwest. She’s followed the sun from dramatic rise to colorful set, and taken in both epic expanses and its finest grain of sand. But in recent years, her attention has focused on a variation: humans’ impact on the landscape. Although not documentary in style—her latest images are still quite stylized—this direction is somewhat of a return for Vesselinova, who spent much of her early career working for a national photography service in Bulgaria. “Photography was my first vocation and love,” she says. “It’s very immediate, and it gets right to the point. As long as you’re able to do it properly, a good photograph is a very potent medium. It’s such a succinct way to express emotion.” Her photography has taken her to Costa Rica, Greece, Mexico, and Hawaii, to name just a few. Vesselinova accompanied her husband to Phoenix and then to Santa Fe, when he was offered a position in 2000 at Los Alamos National Laboratory, where he works in environmental science. Indeed, it was his position in Los Alamos that allowed her to explore off-limits areas shortly after the 2011 Los Conchas fire, the subject of her most recent series of images. In Sketches in Charcoal and Fire, Vesselinova shares two perspectives on the

wildfire: one of billowing smoke over the skies of Santa Fe (taken in 2011), the second of hillsides strewn with ash and blackened tree trunks (taken 2012–2015). The latter results in nearly monochromatic images of the altered landscape that look much like charcoal drawings or etchings. “It is clear now that drought and warming of the Southwest will make disasters such as the Las Conchas fire more common and more dangerous,” she says. “My work acknowledges this new reality . . . not in any political terms but rather as an artistic message. Then again, art is never apolitical per se.” Of late, Vesselinova’s muses have led her in yet a new direction. She’s begun capturing how humans and computers interact, and the light emissions from gadgets—the technological landscape that is changing our surroundings as rapidly and dramatically as a wildfire. Sketches in Charcoal and Fire, July 24–September 24, reception July 24, 5–7 pm, free, Catenary Art Gallery, 616 Canyon, catenaryartgallery.com July 9, 2015 NOW 23 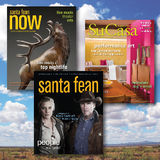