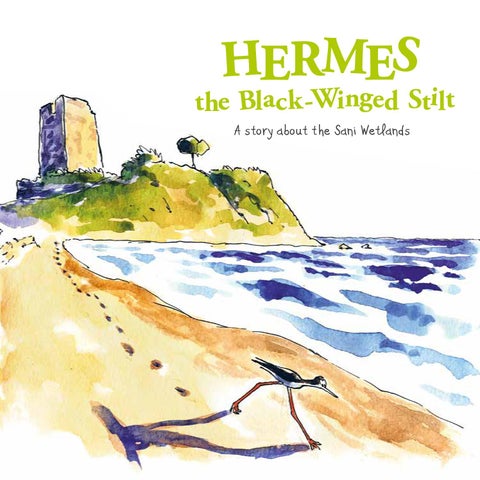 A story about the Sani Wetlands

A story about the Sani Wetlands

All night long, a flock of black-winged stilts were flying high above the waves.

Since they had started their journey from Africa, they had not stopped for a rest… “Hold on, I see land! We are getting closer to our lake,” yelled the bird at the front. However, Hermes was a young bird and this was his first journey. He was too tired to follow them...

... and fell to the ground near an ancient Byzantine tower.

He rested a little and, standing up, realised he was too exhausted to fly again. Hermes started walking in the hope that he would soon find his friends. After walking for a short while,

he arrived at the edge of a pine forest.

Out of the corner of his eye, he saw a fox. â&#x20AC;&#x153;Come closer, my dear, I want to tell you, yum-yum, a secret," said the fox, drooling. Very scared, Hermes sprinted with his long legs as fast as he could, away from the fox, until he reached a tree and clambered up to safety.

There, he perched and finally closed his eyes, among the sleeping birds of the forest.

Soon it was dawn and all the birds woke up. Hermes was hungry and looked around for food, but all he could see from the top of the tree were vast sand dunes and the sea lapping gently against the shore. So, he carried on walking through the forest in search of something to eat. “What do you eat here?” Hermes asked the birds that were balancing on the tree next to him. A blue tit tweeted, “Try the midges that hide in the leaves."

The greenfinch munched, â&#x20AC;&#x153;No, better eat the seeds that fall to the ground." But the midges were too small and the seeds too hard for the bill of a black-winged stilt like Hermes. Still hungry, he continued walking through the woods searching for food and his friends.

After a while, Hermes reached the edge of the forest, where he discovered a freshwater lake. But to actually reach it, he would have to walk through the bank’s dense reeds. The moorhen clucked, “You don’t have the right sort of feet! You need long toes like mine to walk in the reeds." “Shhh, keep your voice down!” whispered the purple heron. “Can’t you see I’m hunting?” Hermes didn’t see the heron, because his feathers were the same colour as the reeds he was surrounded by.

Still, Hermes didn't give up, and after a long and tiring struggle through the dense growth of the reeds, he found himself standing at the other end. He had reached the lake! It was deep, shimmering and full of waterbirds. The grey heron encouraged Hermes, “Come on, the water is shallow.” “Jump in and swim,” quacked the mallard. “Dive below the surface!” shouted the coot. The cormorant didn’t say anything; he simply nodded his head.

…and he soon realised that the water was too deep for him.

Suddenly, the mallard took flight in terror. The coot followed, running fast over the water. They had seen a marsh harrier soaring through the sky, looking right, then left, waiting for a chance to grab any bird that wasn't quick enough to hide. Hermes stayed hidden in the reeds until the danger had passed.

When he was sure it was safe, he continued walking.

Beyond the freshwater lake he spotted an olive grove. “This reminds me of the forest," Hermes thought sadly. All these trees, but no water… And if there isn’t any water, there probably won’t be any food for me either.” “Oh poor boy, do hide your red legs,” someone whispered. “You must be careful, you see. The hawk might spot you!” Hermes looked around and saw a turtle dove sitting still in his nest, perched among the olive branches. “Come to the thistles,” said the goldfinches with joy. “They are a bit unripe but very prickly! No one will dare come up here! Come over for a chat.”

But Hermes was too hungry to talk, so he kept walking.

Thick, coarse bushes appeared beyond the olive grove. A little owl jumped right out of a bush, holding a large beetle in its claws. â&#x20AC;&#x153;Kiew, kiew! Surprised to see me awake, are you? We, the little owls, hunt day and night. Come! Have a snack."

But Hermes was bitten by the beetle before he could have a bite himself!

A red-backed shrike that was sitting in the next bush laughed, “Next time try a grasshopper, they won’t bite you!”

Hermes found himself walking through a grassy field. He listened closely and could hear a black-headed bunting singing in a tree. “Hey you! Can you see any water from up there?” Hermes shouted. “Sure, I can see water. But why would you need it, friend? Is there a better place than the fields?” answered the black-headed bunting.

A crested lark joined in, “Personally, I prefer fields without much grass.” Hermes was too excited to pay much attention to the lark. If the black-headed bunting could see water from his tree, Hermes was close to finding his friends and some food!

Excitedly, he carried on walking and reached a salt marsh; it was shallow and had no reeds at all. Hermes asked the other birds, “Have you seen my friends?” But they were too busy pecking at the edge of the water to answer. A few metres away, two children were watching the birds through their binoculars. “Look! A lonely black-winged stilt. Come over here, little bird! We can show you where to find your friends!” Hermes followed the two children along a sign-posted path. They were soon at Lake Gerani.

After such an adventure, Hermes was delighted to finally join his friends again! He could now treat himself to a delicious lunch of bugs before swimming in the shallow water with the other black-winged stilts. He built his nest on a sandy islet, along with his friends and common terns, without worrying that his eggs might be stolen by a fox. It was the perfect place to built his home. For nowâ&#x20AC;Ś Because when autumn comes, it will be time for Hermes and his friends to bid the wetlands of Sani farewell and head back to Africa.

New adventures will await them here next spring, when, once again, they begin their long journey to return to Sani...

Walking in the Sani Wetlands Where? Along Hermesâ&#x20AC;&#x2122; route, starting from Sani Resort and following the forest trail.

When? The earlier, the better.

What should I wear? Avoid bright colours or 'noisy' nylon clothes.

In what weather conditions? Never during heavy rain or strong winds as the birds hide!

What binoculars should I use? Small binoculars are easy to carry, but those with larger lenses offer clearer views.

How to move? It is best to move slowly, making lots of stops. You must try and move your body slowly when looking behind a bush or a hedge. Take extra precaution when reaching a clearing or a lake shore.

What to study? Look for pictures of birds on the internet using websites such as this one by The Hellenic Ornithological Society (www.ornithologiki.gr). Always carry with you a field guide to the birds of Europe, which will help you identify the birds.

When I see a bird, I always ask these questions:

This short guide will help you identify the birds in the story:

What is it doing? Is it swimming, wading, walking on the ground or climbing on branches? How big is it? Is it like a sparrow, a pigeon or an eagle?

What shape is it? Does it have a long or short neck/tail/legs? What is the shape of its beak? Is it long, like the heron’s? Strong, like a sparrow’s? Or thin, like a warbler’s?

What does it sound like? Try to repeat any song or call with your own voice, so that you can remember it.

The Hellenic Ornithological Society, in collaboration with Sani Resort, is implementing the “Conservation and Sustainable Management of the Sani Wetlands” project. It includes the monitoring of wetland birds and their habitat, establishing a systematic inventory of the wild bird populations, undertaking initiatives to protect priority species, as well as increasing public awareness in locals and visitors alike through environmental educational activities. The fairy tale has been printed on environmentally friendly paper. The paper we use is Forest Stewardship Council (FSC) certified, ensuring the wood and fibres used for its production come from sustainable sources, and that it is produced through the use of over 70% on-site renewable energy, with technologies employed in the process minimizing the use of water and production of nonrecyclable waste. If you would like to learn more about the Sani Green programme, please ask your Guest Services team or email us at info@saniresort.gr or visit www.sanigreen.gr.

Hermes is a black-winged stilt who gets lost and wanders around the Sani Wetlands. While trying to find his friends and a place to build his nest, he meets many species of birds with very different habits from his own…

All proceeds from the sale of “Hermes, the Black-Winged Stilt” will go to the Hellenic Ornithological Society, which protects the Sani Wetlands, home to Hermes and thousands of other birds. ISBN 9 78-960-9678 -02- 5 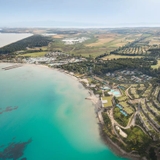 Hermes is a black-winged stilt who gets lost and wanders around the Sani Wetlands. While trying to find his friends and a place to build his...

Hermes is a black-winged stilt who gets lost and wanders around the Sani Wetlands. While trying to find his friends and a place to build his...