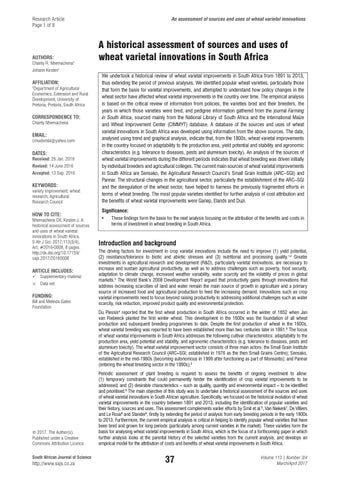 An assessment of sources and uses of wheat varietal innovations

These findings form the basis for the next analysis focusing on the attribution of the benefits and costs in terms of investment in wheat breeding in South Africa.

Introduction and background The driving factors for investment in crop varietal innovations include the need to improve (1) yield potential, (2) resistance/tolerance to biotic and abiotic stresses and (3) nutritional and processing quality.1,2 Greater investments in agricultural research and development (R&amp;D), particularly varietal innovations, are necessary to increase and sustain agricultural productivity, as well as to address challenges such as poverty, food security, adaptation to climate change, increased weather variability, water scarcity and the volatility of prices in global markets.3 The World Bank’s 2008 Development Report argued that productivity gains through innovations that address increasing scarcities of land and water remain the main source of growth in agriculture and a primary source of increased food and agricultural production to feed the increasing demand. Innovations such as crop varietal improvements need to focus beyond raising productivity to addressing additional challenges such as water scarcity, risk reduction, improved product quality and environmental protection. Du Plessis4 reported that the first wheat production in South Africa occurred in the winter of 1652 when Jan van Riebeeck planted the first winter wheat. This development in the 1600s was the foundation of all wheat production and subsequent breeding programmes to date. Despite the first production of wheat in the 1600s, wheat varietal breeding was reported to have been established more than two centuries later in 1891.5 The focus of wheat varietal improvements in South Africa addresses the following cultivar characteristics: adaptability to the production area, yield potential and stability, and agronomic characteristics (e.g. tolerance to diseases, pests and aluminium toxicity). The wheat varietal improvement sector consists of three main actors: the Small Grain Institute of the Agricultural Research Council (ARC–SGI; established in 1976 as the then Small Grains Centre); Sensako, established in the mid-1960s (becoming autonomous in 1999 after functioning as part of Monsanto); and Pannar (entering the wheat breeding sector in the 1990s).5 Periodic assessment of plant breeding is required to assess the benefits of ongoing investment to allow: (1) temporary constraints that could permanently hinder the identification of crop varietal improvements to be addressed; and (2) desirable characteristics – such as quality, quantity and environmental impact – to be identified and prioritised.6 The main objective of this study was to undertake a historical assessment of the sources and uses of wheat varietal innovations in South African agriculture. Specifically, we focused on the historical evolution of wheat varietal improvements in the country between 1891 and 2013, including the identification of popular varieties and their history, sources and uses. This assessment complements earlier efforts by Smit et al.5, Van Niekerk7, De Villiers and Le Roux8 and Stander9, firstly by extending the period of analysis from early breeding periods in the early 1900s to 2013. Furthermore, the current empirical analysis is critical in helping to identify popular wheat varieties that have been bred and grown for long periods (particularly among current varieties in the market). These varieties form the basis for analysing wheat varietal improvements in South Africa, which is the focus of a forthcoming paper in which further analysis looks at the parental history of the selected varieties from the current analysis, and develops an empirical model for the attribution of costs and benefits of wheat varietal improvements in South Africa.

The South African Journal of Science is a multidisciplinary science journal published bimonthly by the Academy of Science of South Africa. Our mandate is to publish original research with an interdisciplinary or regional focus and to provide a forum for discussion of news and developments in research and higher education. 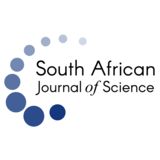