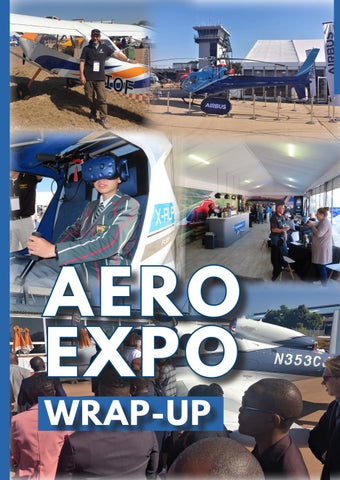 THE SECOND AERO SOUTH AFRICA EXPO The second edition of AERO South Africa took from 7 – 9 July 2022 at Wonderboom Airport in Tshwane (Pretoria). THE THREE-DAY EVENT was generally reckoned to be a success by exhibitors, with the consensus being that the expense of the expo was paid for many times over during the event.

services with almost all the major suppliers taking advantage of the concentration of members of the South African aviation community.

The Aero Expo covered the full spectrum of General Aviation products, technology and

After the novelty of the first edition, the 2022 Aero had slightly fewer exhibitors than the

The Tshwane Mayor and cohort visit the Cirrus Vision Jet.

inaugural event held before the Covid pandemic. In 2019 there were over 100 exhibitors, while this year the number dropped to 72. However many exhibitors felt that the quality of the expo was not compromised. Notably, exhibition space increased from 4200m² in 2019 to 5106m² at this year&#39;s show. Ray Watts reports that, “Exhibitors ranged from an air ambulance company through to avionics, engine components, tracking devices and insurance brokers and underwriters. Most of them were in the big, tented hall and some were outside on the apron, but all were well displayed and easily accessible.

The CAA had a well manned (and womend) stand.

Absolute Aviation had a large presence.

“Every time I went for a walk about, there were people at every stand, and I can only hope that business was being conducted. I was surprised at the number of young people who were enquiring about flying training. These were not just people making polite conversation, but also people who were genuinely interested and I hope that all the flight schools that August 2022

were exhibiting received really worthwhile enquiries. Cirrus Aircraft had both a Cirrus Jet and a Carbon SR22 on display. 43 Air School had two of their Pipistrel Virus SW121 aircraft on display, one of which was the electric powered one (ZS-TKB). It certainly sounds unusual when it&#39;s running, as it is very quiet. The electric powered Pipistrel came with a Virtual Reality headset.

An unusual exhibitor was Cesare Nieddu of Colombo Air who brought his Groppo by road from Welkom.

Inf or mative wor k s hops we r e he ld t hr oughout t he eve nt Despite the biennial AAD trade show happening in September, the larger general aviation companies supported Aero well. Absolute Aviation in particular had a large stand – as did NAC and Execujet. NAC’s Agnes Phillips stated that she was very happy with their attendance as she was able to finalise the sale of a brand new Robinson 44. Airbus helicopters was also a welcome exhibitor with a large stand inside the main marquee.

Husband and wife team of Michelle and Clinton Carroll of Aeronautical Aviation.

There were some visitors who were disappointed that there were no flying displays, however, this was not an air show but rather a trade show, and as with the recent Parys Air show, it proves that there is a big market for air shows amongst the general public.

Pooleys is a welcome new presence.

Visitor numbers were down on the previous edition but this could be expected with the current economic climate. Informative workshops were held throughout the event with subjects covering all aspects of general aviation. Admission to the workshop area was free and the talks were usually very well attended. Aero SA introduced a Business to Business (B2B) Matchmaking programme which proved highly successful with well over 100 B2B meetings confirmed during the three days of the expo.

The electric Pipistrel came with a VR Headset.

B2B matchmaking is a method to identify and connect (match) companies and people with common business interests, complementary services, expertise, technologies or business strengths. The goal was to create cooperative connections and realise business opportunities that mutually benefit both parties.

One of the few disappointments was the Saturday Fly-in with just over 25 aircraft arriving for the day. This may have been due to the everincreasing fuel prices over the past few months. Overall, the 2022 edition of Aero SA was rated a great success and should continue to grow in the future.

Sling Aircraft supported the show despite the pressures of the next week&#39;s 3-plane Oshkosh departure.

Most talks were well attended.

The City of Tshwane along with Messe Frankfurt South Africa has concluded a threeyear partnership to host Aero South Africa at Wonderboom up to and including 2024, so Aero SA will take place on 6-8 July 2023. j The park and sell feature was arguably one of the few disappointments.

SIMPLIFY ENGINE MANAGEMENT. MONITOR AND PROTECT YOUR INVESTMENT. With GI 275 EIS, you’ll add a single, primary solution that can replace the analog engine, fuel and electrical gauges in your light piston aircraft — with easy installation by the qualified installer of your choice. GARMIN.COM/GI275EIS

• Prepare you for your life as a pilot under real conditions.

• To understand the secrets of Africa, you need to experiences its wilderness.

For the Joy of Flying!

Dreams fulfilled. www.merchantwest.co.za Companies in the Group are licensed and authorised FSP&#39;s

The Pooley&#39;s Air Pilot Manual series is a world-renowned reference for both the student pilot and instructor. They have now brought out a Southern Africa series. POOLEY’S AIM IS TO STANDARDISE the quality of flying training, teaching and learning equipment through schools and their instructors. Pooley&#39;s says that all the aviation training publications they produce have been closely scrutinised by the UK CAA and the leading schools and instructors. Over 35 years more than 200,000 copies of Pooleys manuals have been sold. There are five SA volumes covering all the key aspects of the Private Pilots syllabus – excluding South African licence radio patter. Their text books are constantly updated edited and revised. The key volumes published for Southern Africa so far are: • Volume 1: Flying Training • Volume 2: Human Performance and Meteorology • Volume 3: Navigation • Volume 4: The Aeroplane: Principles of Flight and Aircraft General • Volume 5: Air Law and Flight Planning. Pooleys does not only produce books – they also have a strong online digital product range. Students will soon be able to download the new SA manuals through the free Pooleys eBooks App and then in-app purchase the manuals.

Available through the App Store and Google Play. Volume 1 Flying Training includes: • F lying Training Manoeuvres through to Instrument Flying • Pre-flight Briefings &amp; How to Fly the Manoeuvres • Airwork Summaries • The PPL (A) Skill Test Users comments strongly endorse Pooley&#39;s with consistent 5 star ratings: “This book is essential for all new trainee pilots. I highly recommend buying it before starting your PPL flying lessons so that you know what to expect in your flying lessons. It&#39;ll save you money on your training if you know what&#39;s going to happen before each lesson, so read up and be prepared! You can use it in conjunction with a simulator (e.g. X Plane, P3D, FSX) and together they&#39;ll prepare you well for the real world.” The books will be available from 1st September in all good pilots’ supply stores – or order online from: https://www.pooleys.com.

Based on the hugely successful UK and EASA series of Air Pilots Manuals that have helped over 250,000 pilots complete their PPL, they have been created specifically for the Southern African market. Available soon from:

POOLEYS AIR PILOT MANUAL. VOLUME 4 British based Pooleys have become the industry standard for ab-initio flight training books in the UK and Europe. I was therefore thrilled when I saw that they have brought out a Southern African version. SOUTH AFRICAN FLIGHT SCHOOLS are increasingly becoming the preferred training ground for students from across the whole of Africa, the Middle East and India. When I saw the Pooley’s books on their stand at the AERO Expo at Wonderboom, I was immediately intrigued by how Pooleys has tackled the daunting challenge of becoming the standard reference work for this large and diverse market. Apart from the obvious requirement of excellent text, the key requirement for a modern reference book is great diagrams and layout. A quick flip through the Pooley’s books satisfied me that the layout and diagrams have elevated this niche publishing art to a new level. The diagrams, in particular, are models of simplicity and clarity. Importantly too, the text is organised into clear topics with headings and introductions that take the student seamlessly from one subject to the next. Pooley’s has been publishing these books for more than thirty years. The content has thus had the benefit of decades worth of refinement – and it shows in the clarity of writing. The Southern African edition includes reference material specifically for the SACAA PPL

syllabus. And for those who primary concern is to just pass the exams – without necessarily gaining a clear understanding of the principles of flight, the books include practice questions. This is important because the SACAA exams come in for steady criticism for their sometime obtuse or confusing questions. In the bad old days this may have been because the exams were first written in Afrikaans and then translated into English. Now thankfully, the exams are set in English, but there is still plenty of room for confusion. So the inclusion of typical questions is an essential for a reference text. Pooleys also includes an EASA edition for those wanting an European licence.

I was given a copy of Volume 4 in the series: The Aeroplane – General Knowledge. This broadly covers: •

One of the reasons I was particularly interested in Pooley’s Volume 4 is because it deals with the basic but very vexed question of how wings produce lift. Pooleys has stuck to the tried and tested mainstream school of thought that uses the Bernoulli Theorem, which posits that the wing produces a ‘low pressure vacuum’ above the wing as an explanation for how wings produce lift. The other school of thought argues in favour of what is loosely termed the Newtonian explanation. Newton’s Third Law holds that: If two bodies exert forces on each other, these forces have the same magnitude, but opposite directions. Proponents of this school then conclude that wings produce lift by directing air downwards – and according to Newton, this produces an upwards reaction from the wing. This dialectic has been hotly debated by many writers of aerodynamic texts – and especially those who seek to explain the principles of flight to new pilots. My referee in this debate is Peter Garrison who, in an article that went viral, said, “You will never understand lift. Forget it. You haven’t got a chance.” Essentially though, he also comes out in defence of the Bernoulli explanation - arguing like Spike Milligan, that “rumours of Bernoulli’s demise have been much exaggerated.” With this admonition still intriguing me ten years after he wrote it – I was relieved to find

that Pooley’s have stuck to the tried and tested Bernoulli explanation – which is after all, what the examiners are looking for. So, the bottom line is – if you are studying to pass the PPL exams – this is the reference that you need. The books are available online, or from any good pilot supplies shop. j 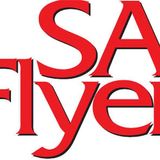