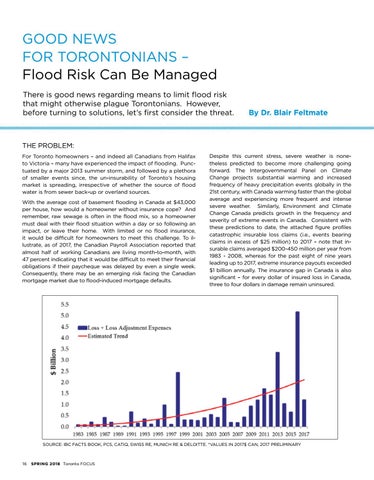 GOOD NEWS FOR TORONTONIANS – Flood Risk Can Be Managed There is good news regarding means to limit flood risk that might otherwise plague Torontonians. However, before turning to solutions, let’s first consider the threat.

THE PROBLEM: For Toronto homeowners – and indeed all Canadians from Halifax to Victoria – many have experienced the impact of flooding. Punctuated by a major 2013 summer storm, and followed by a plethora of smaller events since, the un-insurability of Toronto’s housing market is spreading, irrespective of whether the source of flood water is from sewer back-up or overland sources. With the average cost of basement flooding in Canada at $43,000 per house, how would a homeowner without insurance cope? And remember, raw sewage is often in the flood mix, so a homeowner must deal with their flood situation within a day or so following an impact, or leave their home. With limited or no flood insurance, it would be difficult for homeowners to meet this challenge. To illustrate, as of 2017, the Canadian Payroll Association reported that almost half of working Canadians are living month-to-month, with 47 percent indicating that it would be difficult to meet their financial obligations if their paycheque was delayed by even a single week. Consequently, there may be an emerging risk facing the Canadian mortgage market due to flood-induced mortgage defaults.

Despite this current stress, severe weather is nonetheless predicted to become more challenging going forward. The Intergovernmental Panel on Climate Change projects substantial warming and increased frequency of heavy precipitation events globally in the 21st century, with Canada warming faster than the global average and experiencing more frequent and intense severe weather. Similarly, Environment and Climate Change Canada predicts growth in the frequency and severity of extreme events in Canada. Consistent with these predictions to date, the attached figure profiles catastrophic insurable loss claims (i.e., events bearing claims in excess of $25 million) to 2017 – note that insurable claims averaged $200-450 million per year from 1983 - 2008, whereas for the past eight of nine years leading up to 2017, extreme insurance payouts exceeded $1 billion annually. The insurance gap in Canada is also significant – for every dollar of insured loss in Canada, three to four dollars in damage remain uninsured.