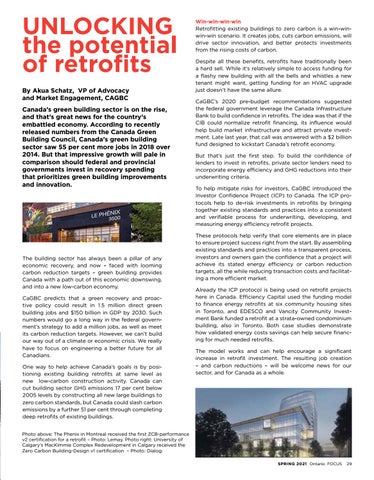 UNLOCKING the potential of retrofits By Akua Schatz, VP of Advocacy and Market Engagement, CAGBC Canada’s green building sector is on the rise, and that’s great news for the country’s embattled economy. According to recently released numbers from the Canada Green Building Council, Canada’s green building sector saw 55 per cent more jobs in 2018 over 2014. But that impressive growth will pale in comparison should federal and provincial governments invest in recovery spending that prioritizes green building improvements and innovation.

The building sector has always been a pillar of any economic recovery, and now – faced with looming carbon reduction targets – green building provides Canada with a path out of this economic downswing, and into a new low-carbon economy. CaGBC predicts that a green recovery and proactive policy could result in 1.5 million direct green building jobs and $150 billion in GDP by 2030. Such numbers would go a long way in the federal government’s strategy to add a million jobs, as well as meet its carbon reduction targets. However, we can’t build our way out of a climate or economic crisis. We really have to focus on engineering a better future for all Canadians. One way to help achieve Canada’s goals is by positioning existing building retrofits at same level as new low-carbon construction activity. Canada can cut building sector GHG emissions 17 per cent below 2005 levels by constructing all new large buildings to zero carbon standards, but Canada could slash carbon emissions by a further 51 per cent through completing deep retrofits of existing buildings.

Win-win-win-win Retrofitting existing buildings to zero carbon is a win-winwin-win scenario. It creates jobs, cuts carbon emissions, will drive sector innovation, and better protects investments from the rising costs of carbon. Despite all these benefits, retrofits have traditionally been a hard sell. While it’s relatively simple to access funding for a flashy new building with all the bells and whistles a new tenant might want, getting funding for an HVAC upgrade just doesn’t have the same allure. CaGBC’s 2020 pre-budget recommendations suggested the federal government leverage the Canada Infrastructure Bank to build confidence in retrofits. The idea was that if the CIB could normalize retrofit financing, its influence would help build market infrastructure and attract private investment. Late last year, that call was answered with a $2 billion fund designed to kickstart Canada’s retrofit economy. But that’s just the first step. To build the confidence of lenders to invest in retrofits, private sector lenders need to incorporate energy efficiency and GHG reductions into their underwriting criteria. To help mitigate risks for investors, CaGBC introduced the Investor Confidence Project (ICP) to Canada. The ICP protocols help to de-risk investments in retrofits by bringing together existing standards and practices into a consistent and verifiable process for underwriting, developing, and measuring energy efficiency retrofit projects. These protocols help verify that core elements are in place to ensure project success right from the start. By assembling existing standards and practices into a transparent process, investors and owners gain the confidence that a project will achieve its stated energy efficiency or carbon reduction targets, all the while reducing transaction costs and facilitating a more efficient market. Already the ICP protocol is being used on retrofit projects here in Canada. Efficiency Capital used the funding model to finance energy retrofits at six community housing sites in Toronto, and EDESCO and Vancity Community Investment Bank funded a retrofit at a strata-owned condominium building, also in Toronto. Both case studies demonstrate how validated energy costs savings can help secure financing for much needed retrofits. The model works and can help encourage a significant increase in retrofit investment. The resulting job creation – and carbon reductions – will be welcome news for our sector, and for Canada as a whole. 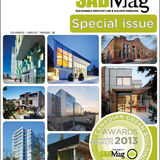