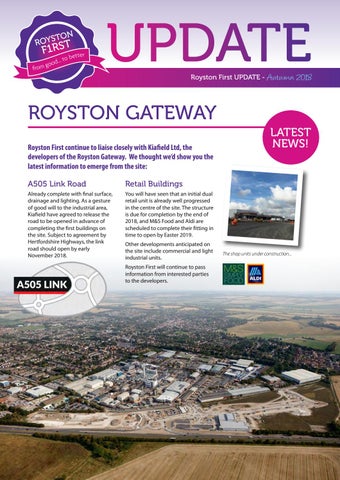 ROYSTON GATEWAY Royston First continue to liaise closely with Kiafield Ltd, the developers of the Royston Gateway. We thought weâ&amp;#x20AC;&amp;#x2122;d show you the latest information to emerge from the site: A505 Link Road

Already complete with final surface, drainage and lighting. As a gesture of good will to the industrial area, Kiafield have agreed to release the road to be opened in advance of completing the first buildings on the site. Subject to agreement by Hertfordshire Highways, the link road should open by early November 2018.

You will have seen that an initial dual retail unit is already well progressed in the centre of the site. The structure is due for completion by the end of 2018, and M&amp;S Food and Aldi are scheduled to complete their fitting in time to open by Easter 2019. Other developments anticipated on the site include commercial and light industrial units. Royston First will continue to pass information from interested parties to the developers.

The shop units under construction...

Pirate Trail Perhaps appropriately, the 2018 Pirate event was a very wet one, from start to finish!

Nevertheless, over 500 children, parents, grandparents and siblings completed the trail. Those in costume were also invited to participate in the fancy dress competition. A total of 42 children took the opportunity to have their photos taken. There were also plenty of participatory craft activities on hand, including: pirate colour-in biff bats, pirate ship plate kits and pirate scratch art pictures.

Once again based in Fish Hill Square, the trail, which set children the task of finding 12 musical instruments in shop windows, attracted 40% more entries than last year.

Once again, Royston First made a significant donation to the largest collective event in the town’s calendar.

When the children had completed their task, they were given free goody bags and the opportunity to try their hands at a variety of craft activities. The total amount of footfall attracted to the town was estimated at 600+.

Christmas Window Painting Following the success of last year’s big window (see below) we’ve booked the window painter to come back in mid-November to add decorations to the windows of... the first 15 town centre businesses that apply!

AN OFFER FOR TOWN CENTRE BUSINESSES

Look for information forms being distributed to your business within the next week, or call Vicky or Julia on 01763 877110. (Only public-facing windows qualify for inclusion. With potentially so many candidates, painting will be limited to a few motifs or perhaps a snowman!)

This year’s event included a new event, the Village Film Festival (further supported by a weekend of films in our cinema linked to the festival’s theme of ‘Voyages of Discovery’). There were also activities such as live music, workshops, dancing and art mostly grouped under the collective banners of The Royston MusicFest and The Royston Fringe. The main weekend was, as ever, anchored by the Royston Arts Society Exhibition in the Town Hall on the Saturday (with the Community Arts Event in Priory memorial Gardens just across the road) and the Finale Concert on the Sunday. Royston First remain committed to supporting this and other key events that ensure our town remains vibrant.

Royston First BID - Renewal The Royston business leaders that oversee the Business Improvement District have decided unanimously to re-ballot the businesses in 2019 to see whether or not they wish to see the BID continue. A couple of early decisions to be made relate to the level at which the BID should be levied (the Multiplier) and also whether any adjustments are required to the list of companies to be included in the BID (the Consortium):

Have your say... Check out www.roystonfirst.com to vote Multiplier

In the first BID period, this was set at 2.00%. For the second term it was reduced to 1.75%. Given that the government’s 2017 rates revaluation resulted in increases in Rateable Value for just about everyone, the suggestion is that the downward trend in the multiplier should continue.

Over the period of the second Royston First BID term, it has been a glaring anomaly that businesses deemed by the Government to be in need of business rates relief are still due to pay the BID levy.

Bearing in mind that every decrease in the multiplier results in less funds available to be spent on Royston, we are asking you to indicate which of the following options you prefer: We ask businesses to indicate what percentage the BID should be levied. REMAIN AT

1.75% Representing an increase to the BID equivalent to your 2017 Rateable Value increase.

1.65% Averages out as a small increase in BID funds.

Averages out at as a similar payment as currently - which obviously represents lower funding to the BID in real terms.

BID On line survey If you are currently a BID payer you will be able to participate in the on line survey during November. This is to ask whether you would like a change to the rateable value entry level and the rate at which the BID should be levied.

In June 2018 the Royston Business Awards was held in Burloes Hall Royston. This year’s event started off in the blazing evening sun with prosecco and gin (supplied by a local distiller.) Nearly 250 business people from the local area, were treated to a delicious 3 course meal and entertainment. There were 8 awards in total, all of which were highly contested by different local businesses. Royston First was proud to support awards highlighting local excellence through sponsoring the programme and providing admin support to ensure the event ran smoothly.

This initiative offers an hour of free parking on the day and at the time indicated on a scratchcard, particularly useful for Christmas shopping? Aimed at attracting employees of businesses located on the industrial estates, the number of companies and employees using the scheme continues to grow. To join the scheme, ring our answering service on 01763 878 242

Julia Brooks, Chair of the Chamber of Commerce who ran the proceedings, said “The event was a massive success with so much positive feedback from people that attended. Without the support of organisations such as Royston First we wouldn’t be able to run the Business Awards. Events like this are so important for Royston to highlight business excellence in the local area”.

COMING SOON TO A CINEMA NEAR YOU

Those of you who have attended the Royston Picture Palace recently will be aware that the current showreels are becoming out-of-date; others amongst you will have noticed that filming activities have been taking place around the town over the summer. Quite clearly there is a causal relationship here!

When the showreels were compiled 18 months ago, they were designed with being updated in mind. Consequently, we simply identified half-a-dozen changes required to the eateries film and nearly 20 to the retail film and then commissioned the film makers to ‘do their thing’! The need to keep current marketing in a cinema that sells over 10,000 tickets per year is self-evident!