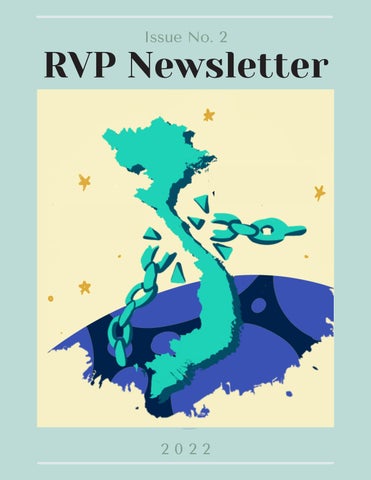 Hey readers! We hope everyone is staying safe within this pandemic (that we are unfortunately still stuck in). While it is important to volunteer and make a difference when you still can, it’s even more important to prioritize your health - you can’t help anyone if you’re unwell! Remember to prioritize your mental and physical health as we continue to get through this. There are lots of ways you can make a difference, whether it be to combat human trafficking or other causes that you care about (even from home!). We hope to show you more ways you can do that in this month’s issue. Stay safe, and we hope you enjoy this month’s newsletter! - Andy &amp; Jordan

RVP’s first fundraiser of 2022 at Tastea Evergreen raised $26.23! Those who ordered on January 26 between 6 PM and 9 PM were given a 50% discount on their order. As usual, all proceeds will go to combat trafficking. Thank you all for your support!

in an traff s to spot m ic u w g h k t r ay n a a ff t in m o s p i u to s w c hspot human g k ay ways to t r n t a in a n t r af s to spo a m f f m f i u w ic u g wa ck h h k ay trafficking t iin t o ys an traff p o t s to s n m p o s i u g w c g h k t r ay n a a ff in m s to spot i u w ck h g ay t r n t a i a ff s to spo n m i u w c g h k ay Unfortunately, human trafficking is still a reality today, no matter where you t in o s p t s o are in the world. According to the International Labour Organization, about g 20.9 million people are trafficked worldwide. This includes anyone that is in any form of forced labor, usually sexual labor or in the private economy (private individuals, groups, or companies), and victims are usually women and children. While human trafficking might seem like it’s a faraway issue, it can happen anywhere and to anyone. Here are a few things to look for if you think someone may be a victim of human trafficking.

2) They are facing a difficult life situation. Statistically, many trafficking victims are those in poverty, undocumented immigrants, or people addicted to alcohol or drugs, as they are more vulnerable to traffickers. They might agree to situations that put themselves in danger out of desperation.

3) They have suddenly started in a fast-moving relationship or been acquainted with someone who raises a lot of red flags. Traffickers can be someone close to you - quite commonly, traffickers can appear to be “romantic partners”, who might shower victims with gifts and attention early in their “relationship” to gain their trust.

4) Someone online is suddenly getting close to them. While online friends might not always be dangerous, if someone you know is getting acquainted with a mysterious online figure very quickly (and this person is asking to meet with them), they could be trying to take advantage of someone who seems to desperately need a friend.

If you ever think someone you know may be a victim of human trafficking, don’t hesitate to ask for help from local law enforcement or through calling the National Human Trafficking Hotline (in the United States): 1-888-373-7888. However, if they are in immediate danger, call 911.

VIETNAMESE LION DANCING Attending local festivals, eating the sticky rice cake known as bánh chưng, receiving red envelopes filled with money—there are a plethora of traditions that Vietnamese people take part in every year on Tết, or Vietnamese Lunar New Year. Lion dances have been a common sight at Tết celebrations for centuries. Donning fierce-looking costumes meant to resemble the mythical chimera kỳ lân, sets of performers parade around to the beat of drums and cymbals in the background. From hosting each other up to create the impression of a standing lion to sudden backward kicks, the movements involved require difficult training to perform well. Their path is cleared by an actor in a grinning mask holding a palm-leaf fan called Ông Địa, or the “Spirit of the Earth”, who is believed to have the power to summon the lions. Many audience members opt to “feed” the lions with red envelopes, and other actors sometimes hang offerings from a bamboo stick to be eaten as well.

Lion dancing originated in China around 2,500 years ago, where lions traditionally symbolize courage, stability, wisdom, and superiority. As one of many traditions involving dancers wearing masks reminiscent of animals, it’s usually performed to ward away ghosts and evil spirits. With thousands of years of Chinese immigration, trade, and foreign rule, it’s a piece of folk culture that’s made its way into cultures across the world. Many believe lion dancing spread from China to Vietnam during one of the periods in which it was under Chinese rule. In Vietnam, it’s traditionally meant to ward off evil spirits, remove negative energies, and bring good luck and fortune. The style of dance in Vietnam takes after the Northern Chinese style, which revolves around acrobatic stunts and kung fu-inspired movements. A good number of lion dance teams don’t charge for performances, so we encourage you to bring red envelope offerings—by donating, you’ll be helping support the continuation of this cultural tradition for years to come.

CIRCLE ONE AND tag a friend!

Interested in sponsoring or collaborating with us? Feel free to reach out at RotaryDistrict5170VietnamProj@gmail.com for more information.

OTHER ORGANIZATIONS TO SUPPORT: Pacific Links Plan International Our Future of Change