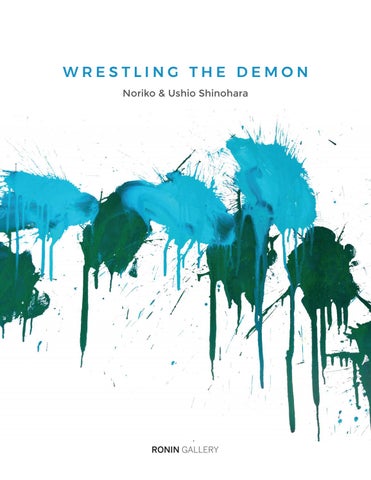 both vital and unrelenting, yet distinct in its manifestations. Noriko and Ushio embraced New York City’s art world at a time when artists such as Yayoi Kusama and the Gutai Group were asserting a Japanese voice in the thriving art scene of the United States. For nearly 50 years, the pair have continued to engage in

this artistic discourse, never ceasing to test the limits of their own creativity. The 1960s and 1970s marked New York City as the international hub of artistic innovation.

“Art is a demon,” “Making art is always

As calls for political and social reform swept

the city, resident artists pushed away from

parallel statements speak to the unremitting

and beautiful nature of a life devoted to

territory. From performance art to conceptual

art, new movements erupted throughout the city. The work of artists such as Andy Warhol, Robert Rauschenberg, and Roy Lichtenstein resonated

influencing the post-war art scene worldwide. Blurring the boundaries between fine art and popular culture, the American avant-garde of this time considered contemporary culture with a dose of irony. Challenging concepts of authorship, appropriation, identity, and consumption, movements such as Pop Art explored and critiqued the contemporary

world through bold colors, unusual methods, and constant wit. These transgressive artistic avenues enticed both Ushio and Noriko to leave Japan and participate in this exhilarating art scene. For Noriko, her prints and paintings reflect self-actualization as an artist through her Cutie series and beyond. As Cutie develops over the years, Noriko exorcises her regrets, hones her artistic awareness, and finds empowerment through her work. In the adventures of Cutie, Noriko

tale of love and struggle with persistent humor. While her Cutie prints unfold in bold monochrome, Norikoâ&amp;#x20AC;&amp;#x2122;s etchings echo this playful attitude in lush detail. From her Un Voyages dâ&amp;#x20AC;&amp;#x2122;Inca series, to her fantastical city scenes, Noriko combines historical allusions, urban life, and rich, meticulously executed details in her works. As an Incan-style cat slinks down a flight of steps and floating nudes recall angels upon a Renaissance ceiling, Norikoâ&amp;#x20AC;&amp;#x2122;s etchings invite the viewer to ponder a new take on reality. From enfant terrible of the Japanese art scene,

perspective. Ever in search of new inspiration, his

struggle of these two veterans of the New York

work reflects his many influences over the course

of his career, both artistic and experiential. While

2013, an Academy Award nomination for Best

to the American avant-garde of the 1960s and

Documentary in 2014, followed by an Emmy

the Oiran series channels his enchantment with

for Best Documentary in 2016. In the afterglow

of the film, the couple has participated in joint

each of his inspirations with clever irony. His boxing paintings punctuate his oeuvre with undiminished dynamism, while his motorcycle sculptures and prints draw from decades of artistic exploration and visual punning to capture the grit and glory of life in New York City. In 2013, Zach Heinzerling’s film Cutie and the Boxer explored the intersecting vibrancy and

exhibitions from Dallas to Tokyo. As Noriko

throughout the years, the print medium weaves

explains, “we are like two flowers in one pot.

through each triumph and growing pain. The

exhibition approaches these works not as solitary

nutrients for both of us. But when everything

art objects, but as a continuous evolution over

several decades. Though these two prolific

Amidst financial struggles and artistic stifling

careers knot and intersect, neither loses its fierce

over the past four decades, their art captures

such moments of artistic blossoming. Noriko

this artistic legacy into the next generation,

and Ushio Shinohara have participated in solo

and Tokyo. From Noriko’s famed Cutie series to

has exhibited her work at the Japan Society

considers decades spent wrestling with the

Gallery in Krakow, Poland, to name a few. Her

demon of art, and quite often, wrestling with

work can be found in collections such as the

Davis Museum and Cultural Center at Wellesly College. Ushio has participated in exhibitions at the Tate Modern in London, the Centre Pompidou in Paris, and the Guggenheim Museum SoHo. His work can be found in permanent collections such as the Museum of Modern Art New York and The National Museum of Modern Art, Kyoto. Wrestling the Demon: Noriko and Ushio Shinohara explores decades of printmaking within

each artist’s materials and styles fluctuated

1. Cutie and the Boxer. Directed by Zachary Heinzerling. New York: 2013.

NORIKO Born in Toyama Prefecture, Japan in 1953, Noriko Shinohara moved to New York City in 1972 to study at the Art Students League. After six months in the city, she met Ushio Shinohara,

who is twenty one years her senior, and gave birth to their son Alex one year later. Financial and emotional strain paused Noriko’s career.

into the basis of her novella New York of Sigh,

She states, “after my husband had skimmed off

which was accompanied by a solo exhibition

my paint, canvas, and ideas, nothing remained

By the time Alex was two years old,

Noriko returned to her work. Determined to

Her talent in this medium can be seen in the

Ushio from her self-proclaimed “queendom,”

Noriko refused to let her work be stalled any

images rich in texture and heavy in atmosphere.

in the fantastical scenes of animate sculpture

her work with irony and poignancy, her

skill for poignancy as well. In Here is still…After

a variety of art styles across time and culture.

In 1981, Noriko exhibited her work at Whitney

memories in the wake of this world-changing

event. In the shadow of the Brooklyn Bridge,

between devastation and hope for the future.

CUTIE SERIES Noriko is best known for her Cutie series, a

the narrative of self-determination. The story

semi-autobiographical story of her relationship

with Ushio. The character of Cutie emerged

in 2003, recognizable by her long braids and

2005, Noriko’s work appeared in the IPCNY

New Prints exhibition. In 2007, she was included

words, “when I started Cutie I felt I am truly,

in the Japan Society Gallery’s Making a Home:

with speech and thought bubbles furthering

from bone to skin, head to toe, an artist.”

USHIO Born in Tokyo in 1932, Ushio Shinohara comes from an artistic family. His father a poet, his mother a nihonga painter and doll maker, Ushio

attended Tokyo University of the Arts in 1952. While his schoolwork focused on Westernstyle

with academia and drawn to the innovative world of post-war art unfolding around him. In 1957, Ushio left the university to pursue his education independently, pouring over international works of art criticism and avantgarde theorists. Ushio entered the 1960s as a force of the Japanese avant-garde community with his action paintings.

Ushio established himself as the enfant

even participated in Twenty Questions with

terrible of the Japanese art scene, where he

Bob Rauschenberg in Tokyo. In 1965, Ushio

gained particular notoriety for his boxing

paintings. Attaching sponges to his boxing

gloves, Ushio would saturate the gloves with

paint and punch his way across a long paper or

canvas. Hair shorn into a Mohawk, he produced

iconography of Edo-period courtesans with

these works before eager crowds, emphasizing

the vivid colors and geometric shapes so

one of the founders of the Neo-Dadaism

Organizers, an avant-garde group known for its

a scholarship from the John D. Rockefeller III

Fund. Though the scholarship ended after a

In 1961, the famed photographer William Klein

year, he made New York his permanent home

immortalized Ushio and his boxing paintings.

and he began his motorcycle sculptures.

Printed in the 1964 photo collection Tokyo, this

While his view from Canal Street presented a

grittier New York than he had imagined, Ushio

incorporated the cityâ&amp;#x20AC;&amp;#x2122;s found materials and

In 1963, Ushio discovered a deep and lasting

subcultures into his work. 1 Ushio has been

inspiration in the American avant-garde on

featured in many solo and group exhibitions

the pages of Art International. He promptly

worldwide, including the National Museum

the work of artists such as Jasper Johns and

New York, and the Japan Society New York, to

interest of these giants of American art, and

Wrestling the Demon: Noriko and Ushio Shinohara explores decades of printmaking within these two storied careers. While each artist’s materials and styles fluctuated throughout the years, the print medium weaves through each triumph and growing pain. The exhibition approaches these works not as solitary art objects, but as a continuous evolution over several decades. Though these two prolific careers knot and intersect, neither loses its fierce independence. Their son, Alex Kukai, carries this artistic legacy into the next generation, drawing inspiration from street art of New York and Tokyo. From Noriko’s famed Cutie series to Ushio’s notorious boxing paintings, this exhibition considers decades spent wrestling with the demon of art, and quite often, wrestling with themselves.