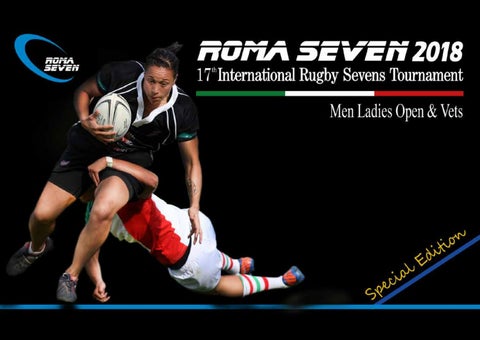 Rugby Seven started in Melrose, Scotland, in 1883. Since then, Rugby Seven grew to the same level of popularity as rugby 15 with a constantly growing interest. Today the World Rugby Sevens Series have an audience of 850 million - + 24 million each year - carried by 38 different broadcasters - in 16 languages - in more than 149 countries

Roma Seven, the most important Sevens in Italy, has become year by year the “must” tournament to participate in, third in Europe and ninth on the World circuit.

Guest Stars at Roma Seven The Roma Seven International Rugby Seven Ladies Tournament has hosted, since 2009 first edition, the best and most competitive female teams and players in the world. The “Red&amp; Blu” Samurai Ladies, 2009 first title winner, listed an impressive number of England players. Among these Kat Merchant, Rachael Burford, Fiona Pocock, Alice Richardson, Fran Matthews, Rochelle Clarck, Amy Turner The 2010 and 2011 Cup winners “Red&amp;Blu” Aotearoa New Zealand Maori are, according to IRB, “The best female rugby players in the world”. The International Rugby Board (IRB) has recognised their strength calling them “the impressive New Zealanders who hold the Hong Kong Crown” (as they won for five years the HK Tournament). Spain 7 after securing the 2010 Roma Seven Plate has become the European Champion last July in Moscow at the FIRA Rugby Seven Championship. For the first time at Roma Seven 2011, Kusa, a selection of overseas players get directly to the final, Brasil 7 , sponsored by CIO, pointed out to be ready before admission of rugby 7 at Olympic games and worthy of note the Dutch Ladies, a very athletic team 9

The Roma Seven Village The Hospitality Village will be lodged close to the venue. This is an exclusive area devoted to the guests of the event. The Village, a unique location, makes it possible to organize promotional events, Corporate Hospitality and meetings as well as arrange special areas with high exposure The Village, open throughout the event, is a point of reference for partners, insiders and the general public attending the tournament. A food and beverage service with music will be provided during the event.

Roma Seven, a worldly sports frame Following the Best British tradition , a Dinner Gala for more than 250 people will be served at the Vip village tribune A unique and prestigious occasion for â&amp;#x20AC;&amp;#x153;spoilingâ&amp;#x20AC;? customers, establishing new business connections and livening up new synergies In each edition, Roma Seven organization selects a charity project to co-operate with

Roma Seven Party: Sport and Worldly Life The eagerly awaited, exclusive time for celebrating will conclude the International Rugby Seven Tournament. Representatives from Rome’s jet set will parade at the Vip Village. Following the International Tennis Tournament and the “Piazza di Siena” horse show, the Roma Seven Party will close the great sports and worldly events of the Capital. The event will be the occasion to combine a unique and traditionally important sports like rugby and the world of entertainment. The party will start at the end of the awards ceremony, with seven DJs and endless champagne. An internationally renowned music star will most likely participate.

Rai Sport is MEDIA PARTNER of the event Rai Sport : recorded television report of qualifying rounds from 22.00 till 24.00 (Friday ) Rai Sport: live coverage of final play-outs (quarters, semi-finals and finals) from 20.00 till 24.00 (Saturday) the longest broadcast of the Rugby 7 sector RAI: features, news and reruns for more than 12 hours on air

Business Proposals for Roma Seven 2018 The strength of a great international event: Rugby Seven in the Olympics Rugby: the real novelty of Italian sports enthusiasts Strong international appeal of the city of Rome, more and more value for sports and rugby Tough and constant effort to raise the overall level of the event in terms of sports quality, audience and sponsorship Public relations and committed Press Office Individuation of the event as an elegant and sought-after meeting occasion, not only in the sports sector, due to the Gala Dinner and to the â&amp;#x20AC;&amp;#x153;Roma Seven Partyâ&amp;#x20AC;? Particular attention to international public, through agreements with sports tour operators andexclusive marketing activities Excellent sports level of international teams and players Roma Seven, 1st Sevens tournament in Italy, 3rd in Europe, 9th in the World 31

nÂ° 4 posters (3.00 x 1.00) front row Back cover and dedicated page in match magazine (more than 70.000 copies) Brand to be mentioned by the speaker during the event and awards ceremony 50 invitations to the closing party of the Tournament Customized area and exclusive signboards in the Village Logo on scoreboard of Tournament 50 pass all areas for the Tournament, including authorization to enter the field and the village 20 invitations for the Gala Dinner at tribune

Qualification as â&amp;#x20AC;&amp;#x153;Main Sponsorâ&amp;#x20AC;? of Roma Seven Tournament 2018 Exclusive merchandise rights Use of image and logo of Roma Seven Tournament 2018 Logo in and link to the homepage of the official website of the event (www.romaseven.com) Logo placement in all official promo-adv communications of the event Possibility to customize the tournament name (Title Sponsor) Possibility to hand out samplings and promotional material

nÂ° 2 posters (3 x 1 m ) issued by the Sponsor Qualification as â&amp;#x20AC;&amp;#x153;Official Partnerâ&amp;#x20AC;? of the 2018 Roma Seven Tournament Exclusive merchandise rights Use of image and logo of Roma Seven Tournament 2018 Logo in and link to the official website of the event (www.romaseven.com) Dedicated page in Match Program Magazine (more than 70,000 copies) Possibility to hand out samplings and promotional material Brand to be mentioned by the speaker during the event, at awards ceremony and in the village 30 pass all areas for the Tournament, including authorization to enter the ground and the village 30 invitations to the closing party of the Tournament 6 invitations to the Dinner Gala along the tribune

Sponsorship of a Participating Team - Possibility to fully associate your brand with one of the top participating teams, thus maximizing the exposure - Mention of the sponsorâ&amp;#x20AC;&amp;#x2122;s name in all official press communications and during tournament - Display of logo on shirts

Testimonial - We can identify one or more testimonials from the rugby sector to be associated to your brand as symbol of reliability, solidity, suppleness, agility and speed

Moreover Inclusion of logo and link in the official website of the Tournament Prize money for the winning team, given during award ceremony by your representatives Branding the closing party Branding the Saturdayâ&amp;#x20AC;&amp;#x2122;s Roma Seven aperitif

Our Patronage in previous editions: 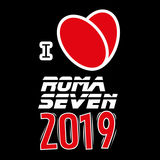