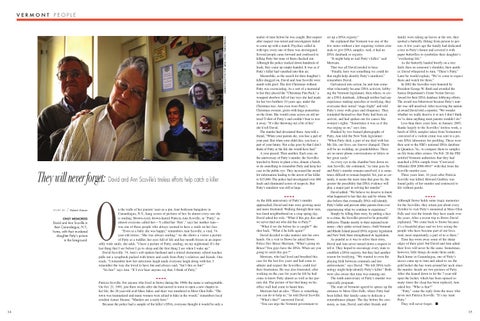 They will never forget: David and Ann Scoville’s tireless efforts help catch a killer STORY BY

David and Ann Scoville in their Canandaigua, N.Y., home, with their murdered daughter Patty’s picture in the foreground.

n the walls of her parents’ neat-as-a pin, four-bedroom bungalow in Canandaigua, N.Y., hang scores of pictures of her. In almost every one she is smiling. Brown-eyed, brown-haired Patricia Ann Scoville, or “Patty,” as almost everyone called her—“I called her ‘Pats’,” says her mother Ann— was one of those people who always seemed to have a smile on her face. “Even as a baby she was happy,” remembers Ann Scoville, a vital, 74year-old retiree. “She was always smiling.” As she shows a visitor a picture of Patty as a toddler, her eyes full of life and her mouth frozen in an impossibly wide smile, she adds, “I have a picture of Patty, smiling, on my nightstand. It’s the last thing that I see before I go to sleep and the first thing I see when I wake up.” David Scoville, 74, Ann’s soft-spoken husband and a retired elementary school teacher, pulls out a scrapbook packed with letters and cards from Patty’s relatives and friends. One reads, “I remember how her infectious laugh made everyone laugh along with her. I remember the way she loved to have fun and always said, “Isn’t this so fun!” “So fun!” says Ann. “If I ever hear anyone say that, I think of Patty.”

•••• Patricia Scoville. For anyone who lived in Stowe during the 1990s the name is unforgettable. On Oct. 21, 1991, just three weeks after she had moved to town to open a new chapter in her life, the 28-year-old avid biker, hiker, and skier was murdered at Moss Glen Falls. “The town was traumatized and many women were afraid to hike in the woods,” remembers local resident Aimee Stearns. “Murders are a rarity here.” Because the police had a sample of the killer’s DNA, everyone thought it would be only a 14

matter of time before he was caught. But suspect after suspect was tested and investigators failed to come up with a match. Psychics called in with tips; every one of these was investigated. Several people came forward and confessed to killing Patty but none of them checked out. Although the police tracked down hundreds of leads, they came up empty-handed. It was as if Patty’s killer had vanished into thin air. Meanwhile, as the search for their daughter’s killer dragged on, David and Ann Scoville were numb with grief. The first Christmas without Patty was excruciating. As a sort of a memorial to her they placed the “Christmas Fun Pack,” a wrapped shoebox full of tiny toys she had made for her two brothers 10 years ago, under the Christmas tree. Ann even wore Patty’s Christmas sweater, green with huge poinsettias on the front. She would come across an old tattered T-shirt of Patty’s and couldn’t bear to toss it away. “It’s like throwing out a bit of her,” she’d tell David. The murder had devastated them. Ann told a friend, “When your parents die, you lose a part of your past. But when your child dies, you lose a part of your future. Not a day goes by that I don’t think of Patty or the life she would have had.” A year passed. Then another. Each year, on the anniversary of Patty’s murder, the Scovilles traveled to Stowe to plant a tree, donate a bench, or do something to remember Patty and keep her case in the public eye. They increased the award for information leading to the arrest of her killer to $15,000. The police had investigated over 800 leads and eliminated scores of suspects. But Patty’s murderer was still at large. •••• As the fifth anniversary of Patty’s murder approached, David and Ann were growing more and more frustrated. Walking through their neat, tree-lined neighborhood on a crisp spring day, David asked his wife, “What if this guy dies and we never find out who did this to Patty?” “What if we die before he is caught?” she shot back. “What if he kills again?” David decided to take matters into his own hands. On a visit to Stowe he asked Stowe Police Det. Bruce Merriam, “What’s going on Bruce? You guys have the DNA. When are you going to catch this guy?” Merriam, who had lived and breathed this case for the last five years and had come to admire and respect the Scovilles, could feel their frustration. He was also frustrated; after working on the case for years he felt he had come to know Patty almost as well as her parents did. The picture of her that hung on his office wall had come to haunt him. Merriam had an idea. “There is something you can do to help us,” he told David Scoville. “What’s that?” answered David. “You can urge the Vermont government to

set up a DNA registry.” He explained that Vermont was one of the few states without a law requiring violent criminals to give DNA samples. And, it had no DNA databank or registry. “It might help us nail Patty’s killer,” said Merriam. That was all David needed to hear. “Finally, here was something we could do that might help identify Patty’s murderer,” remembers David. Galvanized into action, he and Ann somewhat reluctantly became DNA activists, lobbying the Vermont legislature, then others, to create a DNA databank. Although neither had any experience making speeches or testifying, they overcame their initial “stage fright” and told Patty’s story with grace and eloquence. They reminded themselves that Patty had been an activist, and had spoken out for causes like women’s rights. “Sometimes it was as if she was urging us on,” says Ann. Flanked by two framed photographs of Patty, Ann told the New York legislature: “When Patty died, a part of me died with her. My life, our lives, are forever changed. There will be no wedding, no grandchildren. There are no more phone conversations or letters or her great cards.” As every eye in the chamber bore down on Ann Scoville, she continued, “As time goes by and Patty’s murder remains unsolved, it is sometimes difficult to remain hopeful. Yet, just as certainly, it seems the more time that goes by, the greater the possibility that DNA evidence will play a major part in solving her murder.” David added, “We believe we deserve to know what happened to her that day and by whom. We also believe that eventually DNA will identify Patty’s killer and prevent other parents from ever experiencing what we continue to experience.” Simply by telling their story, by putting a face to a crime, the Scovilles proved to be powerful lobbyists. Thanks mostly to their repeated testimony—they spoke several times—both Vermont and Rhode Island passed DNA registry legislation and New York State strengthened its legislation. As painful as it was to relive their story, David and Ann never turned down a request to tell it. They hoped to encourage every state to establish a DNA registry, but they had another reason for testifying. “We wanted to even the playing field between criminals and law enforcement,” says David. “We felt DNA technology might help identify Patty’s killer.” Both were also aware that time was running out. The tenth anniversary of Patty’s murder was especially poignant. The state of Vermont agreed to spruce up the entrance to Moss Glen Falls, where Patty had been killed. Her family came to dedicate a remembrance plaque. The day before the ceremony, as Ann, David, and other friends and

family were raking up leaves at the site, they spotted a butterfly flitting from person to person. A few years ago the family had dedicated a tree in Patty’s honor and covered it with paper butterflies to symbolize their daughter’s “everlasting life.” As the butterfly landed briefly on a tree limb, then on someone’s shoulder, then another, David whispered to Ann, “There’s Patty.” Later he would explain, “We’ve come to expect them and watch for them.” In 2002 the Scovilles were honored by President George W. Bush and awarded the Justice Department’s Crime Victim Service Award for their DNA database lobbying efforts. The award was bittersweet because Patty’s murder was still unsolved. After receiving the national award David told a reporter, “We wonder whether we really deserve it or not. I don’t think we’ve done anything most parents wouldn’t do.” Less than three years later, in January 2005, thanks largely to the Scovilles’ tireless work, a batch of DNA samples taken from Vermonters convicted of a violent crime was sent to a private DNA laboratory for profiling. These were then sent to the FBI’s national DNA database in Quantico, Va., to compare them to samples on file from other crimes. On Feb. 28 the FBI notified Vermont authorities that they had matched a DNA sample from “Convicted Offender ID# 2000-0043” with that from the Scoville murder case. Three years later, 16 years after Patricia Scoville was killed, Howard Godfrey was found guilty of her murder and sentenced to life without parole. •••• Although Stowe holds some tragic memories for the Scovilles, they return just about every October to visit Patty’s memorial at Moss Glen Falls and visit the friends they have made over the years. After a recent trip to Stowe David explained, “We come back to Stowe because it’s a beautiful place and we love seeing the people who have become part of our lives. And, most importantly, a part of us is there.” Time has worn away some of the sharp edges of their grief, but David and Ann admit their lives will never be the same. Sometimes, however, little things do make them smile. Back home in Canandaigua, one of Patty’s nieces came up to Ann and asked to see the gold locket she has worn around her neck since the murder. Inside are two pictures of Patty. After she leaned down to let the 7-year-old open the locket, which has been opened so many times the clasp has been replaced, Ann asked her, “Who is that?” “Patty,” came the reply from the niece who never met Patricia Scoville. “It’s my Aunt Patty.” They will never forget. ■ 15