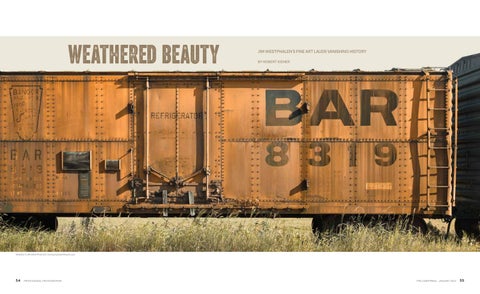 t was love at first sight.” That’s how Theresa Harris, director of the Edgewater Art Gallery in Middlebury, Vermont, describes what happened when a customer recently saw photographer Jim Westphalen’s massive, close-up color print of a bruised, battered, rusted, and long-retired “reefer,” or refrigerated railway car. The 68x30-inch print, “Box Car 8319,” is, like all of Westphalen’s much-admired work, as rich in detail as it is evocative. “The image speaks to us and is iconic,” says Harris. “It’s like a window into our past.” The customer agreed, paying $6,000 for a framed print. “But he had one request before finalizing the purchase,” remembers Harris. Because the photograph would be hanging in a high-traffic area, the customer hoped it could be reframed and protected with a piece of glass or Plexiglas. Westphalen has long presented his art much as painters do, in a floating frame without glass but coated with several layers of archival varnish. As Westphalen has explained, “I want to remove any barrier between the viewer and the photograph. Also, I devised this ‘painterly’ presentation because I was searching for a look that would help separate me from other photographers.” Harris said she would ask Westphalen if he could make the changes the buyer requested.

“Jim turned down the changes,” remembers Harris. “He explained—kindly— that adding glass or reframing the print would change the entire look and the presentation of the piece, and he’d rather lose the sale than have work out there that he wasn’t proud of. He has set such high standards for himself.” The customer understood and still bought the original print without any changes. “Jim knew he could have lost the sale but stuck to his guns,” says Harris. She smiles and adds, “I have a feeling he might not have done that five years ago.” As I join Westphalen in his neat-as-a-pin studio attached to his historic home in Shelburne, Vermont, he laughs then winces a bit when I remind him of the $6,000 sale he almost lost. “Theresa is probably right,” he tells me as we sip strong coffee at one of his work tables. “I might not have held so firm five years ago when I was just starting out selling fine art photographs. But the more I’ve been doing this, the less compromising I’ve become, especially when it comes to something like lowering my standards.” It is exactly those high standards that are responsible for Westphalen’s remarkable transformation from successful architectural and commercial photographer to ultrasuccessful fine art photographer. How successful? The 62-year-old, self-described late bloomer recently stopped accepting commercial assignments and now works solely on his fine art portfolio. Seven galleries handle his work. His large framed limited-edition prints sell from $2,000 to $12,000. According to the dealers who handle his work, his prints are in high demand. “We have 80 artists in our gallery, including popular, prestigious painters, sculptors, glassblowers, and other photographers, but Jim outsells everybody,” Harris explains. “He is by far our best-selling artist.” When I mention these sales figures to Westphalen, he blushes slightly and admits, “Sometimes I have to pinch myself. Ten years ago I was making a decent living as a commercial photographer. I was also happy back then selling my 11x14inch framed landscape prints in a local arts and crafts gallery for $250, all while on the journey of figuring out just how I would set me apart from other fine art photographers. But now I am living my dream, producing and selling fine art

photography full time. And I am earning significantly more than I could have imagined. I often wonder how I got here.” RISKS FOR REWARDS Westphalen’s journey is an intriguing blend of hard work, courage, talent, and vision. Largely self-trained, the Long Islander started working for a commercial photo lab in 1980 and eventually landed a job with a New York portrait studio, photographing mostly weddings. He then branched out into architectural and commercial work. After “falling in love” with New England’s rural landscape, he moved to Vermont in 1996. “I’ve always felt attracted to countryside landscapes, especially those that included fading rural structures like barns and abandoned houses,” he explains. “So moving to Vermont gave me the opportunity to begin photographing what I like to call beauty in decay.” While he made his living working as a commercial and architectural photographer, Westphalen spent much of his spare time crisscrossing the Vermont countryside, looking for the tumbledown, weather-beaten structures that spoke to him. He combed through the internet and explored the records of local historical societies to help locate possible sites. When he came across a scene that appealed to him, he’d make a note of the location and plan to return to it when the light or the weather was perfect. Sometimes he wouldn’t get back until it was too late. “These barns and old buildings have a way of falling down and disappearing,” he explains a bit wistfully. “In many cases it is a battle against time.” Although he was first drawn to these structures because of the scenes themselves—that beauty in decay—he grew compelled by the narratives they represented. “When I realized, for example, that a centuries-old barn was once somebody’s dream, where they wanted to make a life and a living, I began to search out and record the history of every image I photographed,” he says. “It was my way of honoring those people whose blood, sweat, and tears went into these structures.” Slowly, methodically, while he continued to work with commercial clients, Westphalen built a growing body of fine art images. He titled his collection “Vanish,” and after some successful shows, decided it was time to, “draw a line in the sand and see if I could support myself and my family as a fine art photographer. I told myself I could always go back to my commercial shooting if my new work failed to sell.” Setting himself apart from other photographers is essential. He uses a vintage 40-pound Sinar 4x5 view camera fitted with a digital back to make a series of images (usually four) of each scene, which he then stitches together to give his prints attention-getting detail. This allows him to produce massive images without losing detail. Influenced by the work of artists such as Andrew Wyeth and Edward Hopper, Westphalen elects to present his work, as he explains, “More like paintings than photographs.” He uses floating frames, printing his images on high rag content paper, and coats them with several layers of custom-formulated varnish instead of glass. “I want viewers to enjoy the sharp detail and feel as if they could walk into my images,” he says. FOOT IN THE DOOR Next, an even more daunting hurdle. “I had good responses from the public at an early show, but I had to sell fine art gallery owners on my work,” he remembers.

“Moving to Vermont gave me the opportunity to begin photographing what I like to call beauty in decay.”

Phone calls were unproductive. “I’d hear, ‘Sorry, we don’t carry photography,’ time and time again,” he remembers. Sending images online also produced no leads. But he wouldn’t give up. “I knew I had something different. I soon realized gallery owners would have to see my work in person, not online, to understand it.” A turning point occurred after he was twice rejected by an art gallery in the upmarket Vermont resort town of Stowe about seven years ago. “The third time I called them I nearly begged them, saying, ‘Just give me 10 minutes of your time. I want to show you what I am doing.’” The owner agreed, took one look at Westphalen’s unique work, and immediately signed him up. He was on his way. Other galleries followed suit, and Westphalen’s sales have increased every year. He stopped accepting commercial assignments about a year ago and now devotes his time to his fine art photography, beating the deadline he’d set for himself by nearly a full year. Today, as he shows me through his studio and workshop, Westphalen admits that leaving his commercial work behind was risky. “One of my big early concerns was wondering if the public would get it. Would people understand—and like—the images of our disappearing past that I have been so attracted to?” As we pause in front of his massive print of a forlorn shell of a wooden church in a Montana wheat field, “Church of the Brethren” (page 60), it feels almost like I have been transported to this long-abandoned place of worship. When I tell Westphalen this, he smiles and explains, “This church, also known as the Milk River Valley Church, was built in 1915 and closed its doors in the early 1920s after a severe drought and a decline in farm and crop prices uprooted local families. It is part of our heritage. It is yet another piece of American history that is fading away. We need to treasure these icons. And I feel honored to be able to do my small part in showing them and telling their stories.” • Robert Kiener is a writer in Vermont.