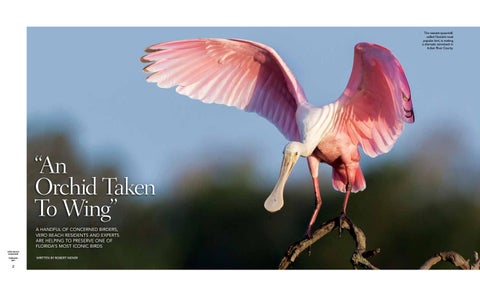 “An Orchid Taken To Wing” A HANDFUL OF CONCERNED BIRDERS, VERO BEACH RESIDENTS AND EXPERTS ARE HELPING TO PRESERVE ONE OF FLORIDA’S MOST ICONIC BIRDS VERO BEACH MAGAZINE FEBRUARY 2017

Noted wildlife biologist Dr. Jerry Lorenz, who has been monitoring the decline of spoonbills in Florida Bay, is thrilled with the thriving colonies he has found in our county.

oted wildlife biologist Dr. Jerry Lorenz has this “thing” about roseate spoonbills, the colorful, charismatic wading birds that he has often likened to “an

orchid taken to wing” and others have described as everything from “gorgeous at a distance and bizarre up close” to “a colorful oddity of nature,” to “Florida’s most popular bird.” Famed naturalist and ornithologist Roger Tory Peterson called the spoonbill “one of the most breathtaking of the world’s weirdest birds.” Says Lorenz, Audubon Florida’s State Director of Research, “They’re beautiful, they’re fascinating, they’re iconic and ...” he pauses for a moment before continuing, “... and they’re in trouble.” Lorenz should know. Over the last 26 years from his base in the Everglades Science Center in Tavernier, south of Key Largo, he has monitored an alarming decline in the numbers of roseate spoonbills nesting in Florida Bay, which was once home to more of the birds than anywhere else in the state. From a high of 1,260 nesting pairs in 1979 the birds have dwindled to maybe 200 today. Lorenz and others believe the decline is due to a combination of largely man-made factors. Wetlands drained for new housing wiped out much of the birds’ foraging grounds. Poor water management in the Everglades has led to rising waters in the region, which in turn affects spoonbill survival. If the water is too high, spoonbills have a hard time locating prey fish because lower water levels in wetlands help concentrate the fish. “Warming temperatures and rising ocean levels are another problem” explains Lorenz. “When the salinity levels rise, the birds’ prey fish numThe decline is especially troubling given the spoonbills’ disturbing history in Florida. Like egrets and other richly feathered

Some have described the roseate spoonbill as “gorgeous at a distance and bizarre up close.”

birds, they were slaughtered for their plumes, which adorned women’s hats and fans in the 19th century. As Audubon magazine has noted, “... spoonbill plumes were the diamonds in southern Florida’s crown.” In the late 1800s plume feathers were

or endangered in Florida, it is considered a Species of Special

ounce. By the time Florida passed the Audubon Model Law in

Concern because its wetland habitat has been threatened.

1901, which outlawed plume hunting, the spoonbills had been

There’s another reason Lorenz is concerned about the de-

largely wiped out in all of Florida. It wasn’t until 1935 that famed

of the presentation he has been giving throughout Florida for

more than two decades: “The roseate spoonbill in Florida Bay:

of the colorful birds alive.

A Pink Canary in the Coalmine.” According to Lorenz, the birds

“That’s what makes this decline all the more troubling,” says

are an “indicator species.” As he explains, “They are telling us

Lorenz. “These birds were almost wiped out by man but came

back and flourished. They are resilient. But once again they are in

trouble.” Although the species is not federally listed as threatened

ment and our lifestyles. We need to pay attention.”

The Stick Marsh colony is an ‘honest-to-goodness success story.’ It’s both a testament to the birds’ adaptability and the enthusiastic, knowledgeable action from residents in Vero Beach and nearby. They should be very proud of the role they’re playing in helping to save these fascinating birds. –DR. JERRY LORENZ

The roseate spoonbill has been compared to a pink-feathered arrow in flight.

Beach birding enthusiasts about an increase in local spoonbill sightings. Vero-based ecologist David Cox, biologist William Loftus, local Audubon Society president Richard Baker and other Vero Beach birders reported seeing growing numbers of spoonbills at places like the Pelican Island National Wildlife Refuge, along the Indian River Lagoon and elsewhere. “We were excited that more and more of the birds seemed to be turning up in our neck of the woods, especially because we knew they were in trouble down south,” says ecology consultant Cox, who also heads up the nonprofit conservation group, Florida Conservancy. Each year, especially during the winter breeding season, local birders reported growing numbers of spoonbills nesting on two small spoil islands of the St. John’s Water Management Area, a popular birding spot near Fellsmere some 19 miles west of Vero Beach and known locally as the Stick Marsh. As the Stick Marsh sightings increased, Cox and Loftus inVERO BEACH MAGAZINE FEBRUARY 2017

formed Lorenz that he should investigate what had begun to look like a permanent colony. “They told me the several original pairs that had been sighted had increased to 10 or 15 or maybe

The Stick Marsh Islands boasting an ever-growing colony of spoonbills have been designated as a Critical Wildlife Area. This designation makes the islands off-limits to people all year and the 1.5 acres of water around the islands is closed to the public when the birds are nesting and raising their families.

more,” remembers Lorenz. “I decided to come up to conduct a GREG HILLS

ike many birders, Cox had watched the islands’ huge

In conjunction with the Pelican Island Audubon Society, Cox

variety of birds, from egrets to spoonbills to herons

made a presentation to the Florida Fish and Wildlife Conservation

and anhingas, and realized the location was special.

Commission in July 2016 to designate the Stick Marsh islands as

Because the colonies were on islands, both the birds and their

a Critical Wildlife Area. The designation would provide a 200-foot

eggs were protected from predators such as feral cats, possums

buffer zone for the nesting birds by preventing boaters or birders

or raccoons, which could decimate a nesting colony if they could

from approaching too closely to the islands. Further, the Pelican

reach the island. “But the alligators keep them in check if they

Island Audubon Society is enlisting volunteers to take part in

try to swim over,” birder David Simpson told me on a recent visit

to the Stick Marsh.

However, the birds were especially vulnerable to two-legged

spoonbill nesting and foraging at the Stick Marsh colony.

birders and photographers who have gotten too close or even

plains with a broad smile that The Florida Fish and Wildlife

onto the islands, scaring away adult spoonbills. “That can be

Commission designated the Stick Marsh’s two islands and the

disastrous,” explained Simpson. “If the adult birds are flushed

water around them a Critical Wildlife Area in mid-November. In

from their nests, fish crows or black vultures can attack the eggs

addition to making the islands off-limits to people all year, the

or the nestlings.” With a good telephoto lens or a spotting scope,

1.5 acres of water around the islands will be closed to the public

close to the islands.

families. “We are all thrilled with the fast response,” says Baker.

The brilliant plumage of the roseate spoonbills made them a target for plume hunters in the 1800s.

census in April 2016.” It was a day Lorenz will never forget.

smiled as he watched an armada of the 2-foot-long pink, car-

trees’ nests bringing food to their nestlings and flying out for

per trees, I knew this was something very special,” says Lorenz.

more. As the “woof woof” of the Technicolor birds’ wing beats

“There were a heck of a lot of spoonbills!”

As he and Cox crossed to one of the islands in kayaks,

Lorenz kept scanning the trees and the skies above and excit-

nesting pairs; 280 roseate spoonbills with an average of three

edly said, “This is a giant colony!” Lorenz was used to trudging

chicks in each nest. That made the Stick Marsh colony the sec-

through mosquito-infested, thigh-deep waters and into Florida

ond or third largest nesting aggregation of spoonbills in Florida.

Bay mangroves to spot the elusive and well-hidden spoonbills

“We were both amazed at the number of spoonbills and oth-

down south. Here, on these two tiny islands, the birds were in

those two small islands,” remembers Cox. “We also knew they

Although Lorenz admits he is “saddened” by the demise of

the roseate spoonbill population in Florida Bay, he notes that

spoonbill colonies have also appeared in other locales across

Cumberland Island. He calls the Stick Marsh colony an “hon-

ing birds tend their nests, vacuum up food from the fish-rich wa-

ters, feed their young and preen themselves in the early morning

tament to the birds’ adaptability and the enthusiastic, knowl-

sunshine. It’s hard to believe that over a century ago almost ev-

edgeable action from residents in Vero Beach and nearby. They

ery one of these birds had been slaughtered for their beauty. As

we watched an adult lift off into flight, I was reminded of how

save these fascinating birds.”

Robert Porter Allen, one of the bird’s most ardent protectors,

Last winter I went with bird expert David Simpson on a halfday birding tour of the Stick Marsh. As fishermen set off in out-

described the sight: “It is as though an orchid had spread its lovely wings and flown.” `

boards and noisy air boats and birders set up their powerful spotting scopes or long lens cameras on the shore facing the roseate spoonbill colonies, he pointed to a pair of pink arrows that were slicing through the sky high above the Brazilian pepper trees. “Spoonbills or Platalea ajaja,” he told me, “They have been VERO BEACH MAGAZINE FEBRUARY 2017

foraging for food nearby and are coming in to feed their young.” Sure enough, I watched through powerful binoculars as an adult spoonbill landed on a nest and regurgitated its catch into its nestlings’ wide-open mouths. “They love it here; there is an

The Pelican Island Audubon Society is looking for volunteers to help track spoonbills in Indian River County and is asking anyone who observes more than five spoonbills feeding together to report times, dates and locations to the society. For more information visit the society’s website at www.pelicanislandaudubon.org.

"An Orchid Taken to Wing"

"An Orchid Taken to Wing"