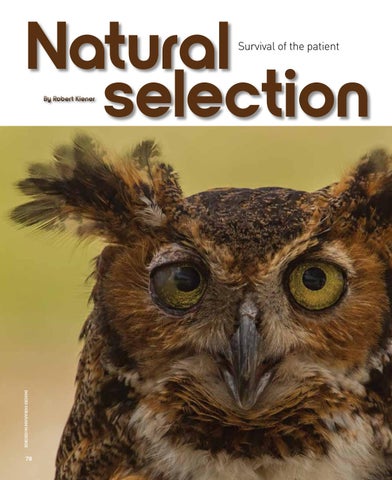 Survival of the patient

s he pilots his 24-foot-long Fiesta pontoon boat down Florida’s Silver River, Captain Tom O’Lenick suddenly eases back on the throttle and whispers to wildlife photographer Graham McGeorge, “There, just ahead, under that big cypress.” McGeorge scans the riverbank and spots a magnificent, 4-foot-tall long-legged great blue heron, seemingly frozen in place, its intense yellow eyes searching the river for prey. O’Lenick cuts the engine, and as the boat glides silently down the crystal-clear river closer to the black-capped, bluish-gray heron, he whispers, “You see him?” McGeorge says nothing but nods almost imperceptibly to O’Lenick. Both men have worked together for years, locating and photographing wildlife in this jungle-like region of central Florida. O’Lenick quietly paddles the boat closer to the shore as McGeorge zeroes in on the heron with his massive 600mm f/4 lens. Then, even before McGeorge can click off one frame, the heron raises his gaze from the water, looks at him, and lifts off into graceful, slow-motion flight, arcing across the river. “Darn!” says McGeorge in his thickly accented Scottish brogue. “Another one got away.” It is a scene that will play out, with varying results, again and again this sunny morning as McGeorge attempts to photograph the varied wildlife that populates the lush, 5,000-acre Silver Springs State Park.

Like all successful wildlife photographers, Jacksonville, Florida-based McGeorge is intimately familiar with the give-and-take of the discipline. “It’s a waiting game that requires immense patience. You can never be in a hurry,” he explains as we motor down the Silver River. “It’s also about being in the right place at the right time.” McGeorge, a native of Dumfries, Scotland, who immigrated to the United States in 1994, can thank his keen eye and knack for being in the right place for helping him earn a slew of awards and international recognition—the National Geographic Traveler Contest, the Smithsonian Magazine Photo Contest, the International Kontinent Photography Awards, Art Wolfe’s The Compelling Image Contest, and more. His work has been published in magazines ranging from National Geographic to The New York Times Magazine to BBC Wildlife Magazine, and he is represented by agents in both the United States and Europe. “Master of Disguise,” (right) a compelling photo of an Eastern screech owl peering out from a hole in a pine tree, is arguably his most famous, most published photograph and a good example of the lengths McGeorge will go to get a memorable image.

After learning from a friendly park ranger that an Eastern screech owl had set up home in the hollowed trunk of a pine tree in Georgia’s Okefenokee Swamp, McGeorge began making frequent pilgrimages to the site, about an hour north of his home. “I have always loved owls, and I must have spent over 80 hours over 10 days for two months trying to get a shot,” he says. “I’d get there by about six in the morning, hike into the swamp with all my gear, set up and wait for the light to come up and the owl to emerge.” McGeorge set up his Canon EOS-1D Mark III camera and tripod about 25 feet from the nest and waited. And waited. He lathered himself with DEET but was still getting eaten alive by swarms of yellow flies, mosquitoes, and red bugs. “I tried using a bug net that covered my face and neck but it got in the way,” he remembers. “So I just resigned my-

self to getting bitten.” (To this day he never wears shorts, explaining, “My legs are a mess; they have been so badly bitten and scarred.”) Hours passed as McGeorge stood his ground. Finally, one day just an hour or so after he’d arrived in the swamp, the owl warily poked its head out of the tree cavity. Then, possibly sensing that the coast was clear, he stood in its entrance. Click! McGeorge caught the owl staring majestically into his lens while it was cunningly camouflaged within the rough bark of the tree. He got the photograph that, as he now admits, “I will be known for as long as I live. It was that once-in-a-lifetime shot.” McGeorge has established a special relationship with the Jacksonville Zoo, which has offered him behind-the-scenes access in return for the right to use his pictures. “It’s a win-win situation,” he says. “I am fasci-

nated by bonobos and I can’t afford a trip to the Congo to photograph them, but there are plenty at the zoo.” His close-up portrait of Lily, one of the zoo’s females, was a finalist in National Geographic’s photo contest and was published around the world. He donated a signed copy of the picture to the Bonobo Conservation Initiative to help raise money to protect the wild bonobos’ habitat in the Democratic Republic of the Congo. Some of his photographic expeditions take him farther afield. “It thrills me to jump on a plane and go to wild, untamed places like Alaska, Montana, and Vancouver to photograph wildlife,” says McGeorge. He and his wife, Ellen, often backpack and camp in national parks. He’s been three times to Brooks Falls in Alaska’s Katmai National Park to photograph brown bears gorging themselves on salmon. He’s been chased by a massive

bull moose in the Grand Tetons (“It was my fault, I wore out my welcome”) and once awoke in a national park to find his tent surrounded by a pack of howling coyotes. What’s left on his photographic bucket list? “No doubt about it, I’d love to photograph polar bears,” says McGeorge with a broad smile. “That’s been a longtime dream.”

As today’s trip down the Silver River illustrates, McGeorge has plenty to photograph closer to home. Alligators lounge along the riverbank, tortoises sunbathe on fallen logs, and scores of exotic birds—from the “snakebird” anhinga to the double-crested cormorant to the red-shouldered hawk—roost in trees and fly overhead.

uncannily human-like,” says McGeorge as he squeezes off a few shots. “They never fail to fascinate me.” Having photographed the monkeys for more than five years, he’s become protective of them. After he photographed a macaque wearing a GPS collar that was constricting its neck and rubbing it raw, he worked with animal rights groups to have researchers remove the collar. “Ethics are important,” he explains. “We are privileged to observe and photograph these amazing animals. It’s important that we protect them.” As he’s speaking, two young macaques chase through the branches of a southern swamp maple. The smaller of the two leaps off a branch and McGeorge captures the airborne moment. The monkey misses the branch he was aiming for, and a lower branch catches him. “Got it!” says McGeorge. “That one didn’t get away.” •

grahammcgeorge.com Robert Kiener is a writer based in Vermont. “There’s so much to photograph here that you have to choose your subject carefully,” says McGeorge. He prefers to do his work from a boat because he finds birds to be more skittish when photographed on land. He admits he used to shoot a lot more, sometimes falling victim to the “spray-andpray” technique of photography. Today he’s much more selective. “I’ve learned to slow down and trust my intuition,” he explains. “Sometimes I’ll come here and won’t shoot anything. I just love being out in nature.” He prefers to get his images in camera and tries to keep editing to a minimum. As we approach a bend in the river he explains that we’re about to reach the site of one of Florida’s best-kept secrets: a colony of several hundred rhesus macaque monkeys, the descendants of a handful of wild monkeys introduced to the region in the 1930s. Almost on cue, after we round the bend, the shore and cypress trees come alive with dozens of feral monkeys. A sturdy alpha male watches over his troop as mothers groom babies and youngsters fling themselves from branch to branch. “Their mannerisms are