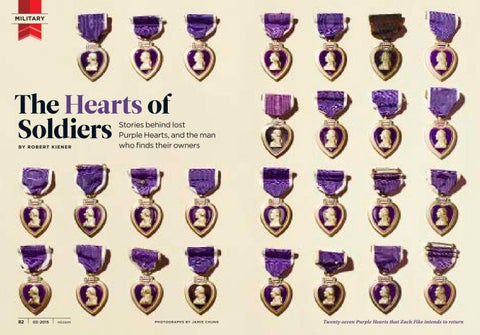 The Hearts of Soldiers BY ROBERT KIENER

Stories behind lost Purple Hearts, and the man who finds their owners

THE HEARTS OF SOLDIERS

n a chilly January afternoon in 2013, hundreds of

just days later, Zach was deployed to Afghanistan as an infantryman. After a year at war, Zach returned home and continued his search for Piccoli. On a genealogy website, he found a reference: Corrado A. G. Piccoli, who had six brothers and sisters, was born in Italy in 1932, immigrated with his parents to Watertown, New York, and enlisted in the Army in 1943. The private had been killed in action in France on October 7, 1944. But Zach couldn’t find the man’s siblings to inform them about the medal. As part of his quest, Zach drove four

people crowded a community center in Rutherfordton, North Carolina, to see a Purple Heart pinned to the lapel of World War II veteran George Hemphill. Trim and red-haired at 90, George stood proudly in his good blue suit to receive his medal almost 70 years after it had gone missing. The morning of the ceremony, George told his daughter Donna, “I’m going to do my best not to cry.” But he found it hard to keep his composure when the audience jumped to their feet and applauded. “I’m not the hero,” he told them. “The heroes are still over there, the ones who didn’t come back.”

online searching, Zach was quickly able to find the medal’s rightful owner. And a year later, on that January day, Robert presented it to George, with Zach, a full-time Vermont National Guard captain, standing nearby in full dress uniform.

ach comes from a long line of soldiers. His mother was an Army drill sergeant, his father was an Army command sergeant major, and his relatives served in six U.S. wars—the Revolutionary War, the War of 1812, the Civil War, both world wars, and the Vietnam War. A veteran of nearly 17 years, he served in the Iraq and Afghanistan wars. For a decade, he has collected military memorabilia. When his mother gave him a Purple Heart as a Christmas gift in 2009, though, he knew he would give it up. “I had to return the medal [to its owner],” says Zach, 33. “It needed to go home.” The engraving on the medal said Corrado A. G. Piccoli, but Zach’s Internet search came up empty. Then,

In 1944, George was a 21-year-old Army corporal stationed in France when he was temporarily blinded by shrapnel and awarded a Purple Heart. From his hospital bed, he put the medal in the mail to his family. But the Purple Heart, engraved with George’s name, never arrived in North Carolina. Like many other World War II vets, George did not detail his war experiences when he returned home, so no one was aware of the award. As far as he knew, the medal was lost to history. Then, in 2000, in a little antiques shop in South Carolina, Robert Blum spied George’s Purple Heart in a pile of other things and purchased it for $70. “I bought it to return it,” says Robert, a Vietnam-era vet, now 70. He couldn’t get through to George, however. Years passed before Robert heard about an organization, Purple Hearts Reunited, that brought militar y veterans together with their missing medals. Robert called the organization, and founder and director Zachariah Fike picked up the phone. Through networking and

hours from his home in Georgia, Vermont, to Watertown one snowy, windy winter afternoon and pored through the burial registry of a local cemetery. The caretaker told Zach that Private Piccoli’s remains had been transported back to Watertown from France in 1948. “You mean he is buried right here?” Zach was astonished. Many American WWII vets were buried abroad. The caretaker offered to take Zach to the grave site. Shortly, they came to a marble slab engraved with Piccoli—the final resting place of the soldier Zach had been seeking for more than a year. He choked up and silently spoke to the spirit of Corrado. “Thank you. It’s as if you’ve been guiding me.” Local residents helped Zach track down Corrado’s sister Adeline Rockko, 87, who had assumed that her brother’s Purple Heart was with another of their siblings all along. “The Purple Heart was all my parents had of my brother,” Adeline told Zach. “They hung on to it for dear life. On special occasions, they’d take it out of the trunk in their bedroom “The medals don’t belong in a basement or a box,” says Fike, who received a Purple Heart in 2010 after being wounded in Afghanistan. “We should put these people on a pedestal.” rd.com

THE HEARTS OF SOLDIERS

nspired by the return of this Purple Heart, Zach poured time and money into his project, determined to replicate his success for other military families. He has spent the better part of four years purchasing Purple Hearts from antiques stores and pawnshops and via the Internet—one found in a landfill, another at a yard sale, still more in an abandoned storage locker and the trash. He has gone back in time to track down their owners and returned more than 100 medals. Another 200 of them are ready for return. The Military’s Oldest Medal He remembers the stories The Purple Heart was originally called behind each one. “It’s as if the Badge of Military Merit when George they’re always with me.” Washington created it in 1782. Only three Once Zach locates the owner documented awards were given before it fell into disuse. In 1932, Army Chief of Staff of a Purple Heart, he mails it General Douglas MacArthur revived it. The to the person or presents it at medal was redesigned as a purple heart a “return ceremony,” during with a bronze border encircling a portrait which he recounts the soldier’s of George Washington. MacArthur awarded it to soldiers who were wounded in action service and the history of the and to the families of those who died in comPurple Heart. Each return costs bat. To date, nearly two million members of about $1,200, which includes the U.S. armed forces have received medals. purchasing, refurbishing, and framing the medals, plus the and let us hold it.” Zach arranged a ceremony itself. He has spent more ceremony in which three generations than $50,000 of his own money— of Corrado’s family came together Purple Hearts Reunited receives some to honor Private Piccoli. “Lots of small donations—so now when his tears, lots of laughter,” Zach recalls. searches take him far and wide, he By chance, the event was held on often sleeps in his rental car. It’s August 7, which the family later dis- wearing on him a little: “Now that I’m covered is National Purple Heart Day. married and have a young child, it’s 86

getting harder to afford the cost and put in the time,” he admits. Still, he shows no signs of slowing down.

vowed to carry his Purple Heart with her wherever she went. Throughout the years, even after she remarried, she carried the medal with her. After losing her second husband, Estelle entered a nursing home and brought the medal with her. She took it out to hold almost every day. When she discovered it was missing, she broke down. “It was as if she had lost

ith each Purple Heart that lands in Zach’s hands, there’s a new story to uncover. In one particularly poignant one, a medal was discovered in a dryer’s lint trap in the laundry room of the Robertsdale Healthcare Center in Robertsdale, Alabama. The name engraved With each Purple Heart that on the back was Toulman lands in Zach’s hands, there’s Freeman. Nursing home ada new story to uncover. ministrators checked their records and came up with no one by that name, so they placed the Toulman all over again,” Zach says. medal in a box and put it on a shelf. The nursing home’s employees looked In 2012, the nursing home’s man- everywhere, but no one thought to ager came across it. She reached out check the dryer. Sadly, Estelle died to Zach, who researched Toulman soon after the medal went missing. Freeman and found a WWII soldier of the 7th Armored Division by that n September 11, 2010, Zach name who was killed in Holland at was wounded by an insurthe age of 22. Dated 1944, the soldier’s gent rocket attack at Bagram obituary mentioned his eight broth- Airfield in Afghanistan and received a ers and sisters. Through ingenious Purple Heart of his own. He doesn’t searching, Zach found Toulman’s last like to talk about the award and insists surviving sibling, 91-year-old Willie the honor is not the reason for his Elizabeth Freeman. At a return cer- ongoing passion for his work. emony attended by Willie and other “These Purple Hearts were awarded relatives, Zach finally learned the to people who fought, bled, and died story behind the medal. for this country,” he says. “That’s why Shortly after Toulman’s death, the we should do everything we can to see medal was presented to his young that they are returned.” widow, Estelle Freeman. Relatives told Zach that Estelle had been so devas- To support Purple Hearts Reunited, go to tated by her husband’s death that she purpleheartsreunited.org.