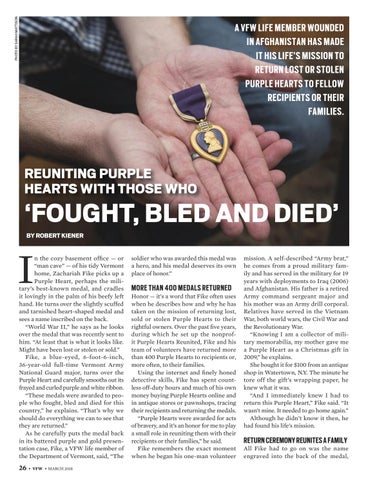 A VFW LIFE MEMBER WOUNDED IN AFGHANISTAN HAS MADE IT HIS LIFE’S MISSION TO RETURN LOST OR STOLEN PURPLE HEARTS TO FELLOW RECIPIENTS OR THEIR FAMILIES.

REUNITING PURPLE HEARTS WITH THOSE WHO

n the cozy basement office — or “man cave” — of his tidy Vermont home, Zachariah Fike picks up a Purple Heart, perhaps the military’s best-known medal, and cradles it lovingly in the palm of his beefy left hand. He turns over the slightly scuffed and tarnished heart-shaped medal and sees a name inscribed on the back. “World War II,” he says as he looks over the medal that was recently sent to him. “At least that is what it looks like. Might have been lost or stolen or sold.” Fike, a blue-eyed, 6-foot-6-inch, 36-year-old full-time Vermont Army National Guard major, turns over the Purple Heart and carefully smooths out its frayed and curled purple and white ribbon. “These medals were awarded to people who fought, bled and died for this country,” he explains. “That’s why we should do everything we can to see that they are returned.” As he carefully puts the medal back in its battered purple and gold presentation case, Fike, a VFW life member of the Department of Vermont, said, “The

soldier who was awarded this medal was a hero, and his medal deserves its own place of honor.”

MORE THAN 400 MEDALS RETURNED Honor — it’s a word that Fike often uses when he describes how and why he has taken on the mission of returning lost, sold or stolen Purple Hearts to their rightful owners. Over the past five years, during which he set up the nonprofit Purple Hearts Reunited, Fike and his team of volunteers have returned more than 400 Purple Hearts to recipients or, more often, to their families. Using the internet and finely honed detective skills, Fike has spent countless off-duty hours and much of his own money buying Purple Hearts online and in antique stores or pawnshops, tracing their recipients and returning the medals. “Purple Hearts were awarded for acts of bravery, and it’s an honor for me to play a small role in reuniting them with their recipients or their families,” he said. Fike remembers the exact moment when he began his one-man volunteer

mission. A self-described “Army brat,” he comes from a proud military family and has served in the military for 19 years with deployments to Iraq (2006) and Afghanistan. His father is a retired Army command sergeant major and his mother was an Army drill corporal. Relatives have served in the Vietnam War, both world wars, the Civil War and the Revolutionary War. “Knowing I am a collector of military memorabilia, my mother gave me a Purple Heart as a Christmas gift in 2009,” he explains. She bought it for $100 from an antique shop in Watertown, N.Y. The minute he tore off the gift’s wrapping paper, he knew what it was. “And I immediately knew I had to return this Purple Heart,” Fike said. “It wasn’t mine. It needed to go home again.” Although he didn’t know it then, he had found his life’s mission.

RETURN CEREMONY REUNITES A FAMILY All Fike had to go on was the name engraved into the back of the medal,

Army Capt. Zachariah Fike holds a small snowman in February 2010 along the Salang Pass in the Hindu Kush Mountains of Afghanistan while serving with HQ Troop, 1st Sqdn., 172nd Cav Regt. Fike, who also served in Iraq, was wounded during his Afghanistan tour and received a Purple Heart.

family member and receive his recovered Purple Heart. The Piccoli celebration was held by chance on Aug. 7, which the family later discovered is National Purple Heart Day. “It was yet another sign,” Fike said, “that this was meant to be.”

‘I’M NOT IN THIS FOR THE MONEY’

PURPLE HEARTS TURN UP ‘EVERYWHERE’ Despite the costs and time his research takes away from his family, Fike shows no signs of slowing down. He still scours internet auction sites, Craigslist and stores for engraved Purple Hearts. Last year, his charity spent $50,000 buying 125 medals. His nonprofit now employs an executive director, Sarah Corry, the daughter of a twice-wounded Vietnam War Marine,

“Corrado A.G. Piccoli.” He combed the internet but found nothing. Three weeks later, he was deployed to Afghanistan for a tour with the 172nd Cavalry Regiment and had to abandon his search. But he never forgot about Piccoli’s Purple Heart, which he had tucked away safely in his parents’ home in New York. Back home in December 2010, Fike resumed his internet search. Thanks to an updated genealogy site, he discovered that Piccoli was born in Italy in 1923, immigrated with his parents to Watertown N.Y., and enlisted in the Army in 1943. It was a start. Sadly, as Fike soon discovered, on Oct. 7, 1944, Piccoli was awarded the Purple Heart after he had been killed in action in France, less than a year after he had enlisted. After more research, Fike located Piccoli’s 87-year-old sister. “The Purple Heart was all my parents had of my brother,” she said. “They hung onto it for dear life, and we kids were allowed to hold it on special occasions.” Later that year, Fike helped arrange a celebration where three generations of the Piccoli family came together, for the first time ever, to honor their fallen

Although the military has awarded more than 1.8 million Purple Hearts to soldiers, sailors, Marines, airmen and Coast Guardsmen for bravery in combat, not all were engraved with the recipient’s name. When Fike receives a medal that was engraved, he begins searching. Thanks to the internet’s ever-expanding collection of genealogical, memorial and military databases, not all of Fike’s searches are as time-consuming as his first one. Sometimes he can locate the recipient or his or her family with only a few keystrokes by searching various private and public databases. Once he locates a family, he gives them the option of having the medal simply mailed back to them or receiving it via a “return ceremony” that he helps arrange. At a typical ceremony, Fike, or the charity’s “Valor Guard” volunteers who help return medals, will give a speech detailing the history of the Purple Heart. They then present the recovered medal and

other supporting materials they might have located during their research to the recipient or relatives. Local military and other officials often take part, and media frequently cover the return ceremonies. These returns can be costly. Each one averages $1,200 for purchasing, refurbishing and framing the medals, as well as traveling to the ceremony. To cut his costs, Fike confesses he has often slept in a rental car during some returns. He has received donations via his Purple Hearts Reunited nonprofit charity but has spent thousands of dollars of his own money reuniting medals with families. “Now that I’m married and have two children, it’s getting harder to afford the money and time I’m spending,” Fike said. “But I am never going to take money for what I do. I am not in this for the money.”

Air Force Chief Master Sgt. Anthony F. Biancuzzo was wounded by small-arms fire during a rescue and recovery mission on Jan. 29, 1969, near Bien Hoa Air Base during the Vietnam War. The actions of Biancuzzo, then serving as a crew chief with the 21st Aeromedical Evacuation Squadron, earned him a Bronze Star and Purple Heart. Biancuzzo died in 2005, and a fellow veteran found the decorated airman’s Purple Heart — which later was returned to Biancuzzo’s family by Zachariah Fike — at a jewelry shop near Washington, D.C.

and returns medals across the country. And as the charity’s fame spreads, more and more people send in Purple Hearts that need to be researched and returned. Fike now has nearly 200 medals that he hopes to reunite with their recipients. Purple Hearts turn up everywhere, often in the unlikeliest of places. Some have been stolen, others sold or misplaced. Fike has been sent medals that were found in a landfill, covered with dirt on an elementary school playground, in yard and estate sales, in abandoned storage lockers, in garbage about to be discarded and one that was found stuck in a dryer. Another was even dug up by a dog in someone’s back yard. “It can break your heart to see how little respect some people have for these Purple Hearts,” Fike said. Reuniting these long-lost medals with their rightful owners motivates, and always moves, Fike. “A return brings closure to a family but it often means much more,” he explains. Fike remembers an especially touching ceremony in Massachusetts where he returned a Purple Heart to Connie Bachman, the 84-year-old sister of 1st Lt.

Thomas E. Hadley II. The Air Force pilot was killed while flying in the Korean War, and his Purple Heart had been lost for decades. In the 1960s, a landfill worker, who was a former World War II Marine, spotted Hadley’s medal atop a garbage dump and rescued it. He handed it down to his son, who handed it down to his son, who sent it to Fike after he’d read about Purple Hearts Reunited. Several weeks after the return ceremony, Bachman called Fike and told him, “The loss of my brother created a hole in my heart I could never fill. I could never go to a veterans ceremony or even look at an American flag because it would remind me of my brother.” She paused, took a deep breath, then continued, “I have cancer and have been terrified of death all my life. But what you did — returning my brother’s Purple Heart to me — made me feel completely at peace with my life. I am no longer afraid to die. Thank you.” Fike then told her, “I really believe this is your brother making you strong.” Two days later, Bachman died. “I’m not a deeply religious person, but there’s a power in these Purple Hearts

and these decorated veterans that is undeniable,” Fike said. “I’ve seen it time and time again.” Fike should know. Although he rarely talks about it, he has another link with these fallen heroes. On Sept. 11, 2010, nine years to the day after terrorists attacked the World Trade Center, he was wounded while serving with the Vermont National Guard’s 86th Combat Brigade in a rocket attack at Bagram Airfield in Afghanistan. Fike received his own Purple Heart “for wounds received in combat against hostile enemy forces.” The medal now hangs on the living room wall in his parents’ home. As Fike sorts through a recent batch of Purple Heart medals he has received (he gets three to five a week), he confesses that he never forgets the stories of these Purple Heart recipients he has uncovered through his research. “I’ve spent so much time looking into their past that it’s as if they’re always with me, even after I’ve returned their medals,” Fike said. “So many of these stories are so powerful.” Then he turns to his computer and gets back to work, trying to get yet another long-lost Purple Heart back home, back where it belongs. J EMAIL magazine@vfw.org