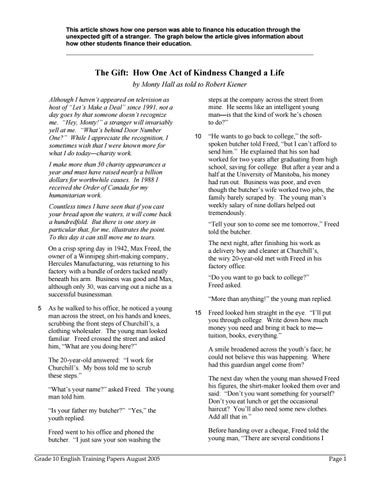 This article shows how one person was able to finance his education through the unexpected gift of a stranger. The graph below the article gives information about how other students finance their education.

The Gift: How One Act of Kindness Changed a Life by Monty Hall as told to Robert Kiener Although I haven’t appeared on television as host of “Let’s Make a Deal” since 1991, not a day goes by that someone doesn’t recognize me. “Hey, Monty!” a stranger will invariably yell at me. “What’s behind Door Number One?” While I appreciate the recognition, I sometimes wish that I were known more for what I do today—charity work.

steps at the company across the street from mine. He seems like an intelligent young man—is that the kind of work he’s chosen to do?” 10

I make more than 50 charity appearances a year and must have raised nearly a billion dollars for worthwhile causes. In 1988 I received the Order of Canada for my humanitarian work. Countless times I have seen that if you cast your bread upon the waters, it will come back a hundredfold. But there is one story in particular that, for me, illustrates the point. To this day it can still move me to tears.

“Tell your son to come see me tomorrow,” Freed told the butcher. The next night, after finishing his work as a delivery boy and cleaner at Churchill’s, the wiry 20-year-old met with Freed in his factory office.

On a crisp spring day in 1942, Max Freed, the owner of a Winnipeg shirt-making company, Hercules Manufacturing, was returning to his factory with a bundle of orders tucked neatly beneath his arm. Business was good and Max, although only 30, was carving out a niche as a successful businessman. 5

As he walked to his office, he noticed a young man across the street, on his hands and knees, scrubbing the front steps of Churchill’s, a clothing wholesaler. The young man looked familiar. Freed crossed the street and asked him, “What are you doing here?” The 20-year-old answered: “I work for Churchill’s. My boss told me to scrub these steps.”

“He wants to go back to college,” the softspoken butcher told Freed, “but I can’t afford to send him.” He explained that his son had worked for two years after graduating from high school, saving for college. But after a year and a half at the University of Manitoba, his money had run out. Business was poor, and even though the butcher’s wife worked two jobs, the family barely scraped by. The young man’s weekly salary of nine dollars helped out tremendously.

“Do you want to go back to college?” Freed asked. “More than anything!” the young man replied. 15

Freed looked him straight in the eye. “I’ll put you through college. Write down how much money you need and bring it back to me— tuition, books, everything.” A smile broadened across the youth’s face; he could not believe this was happening. Where had this guardian angel come from?

“Is your father my butcher?” “Yes,” the youth replied.

The next day when the young man showed Freed his figures, the shirt-maker looked them over and said: “Don’t you want something for yourself? Don’t you eat lunch or get the occasional haircut? You’ll also need some new clothes. Add all that in.”

Freed went to his office and phoned the butcher. “I just saw your son washing the

Before handing over a cheque, Freed told the young man, “There are several conditions I

“What’s your name?” asked Freed. The young man told him.

insist upon.” The youth sat silently, eyes wide with expectation. 20

“First, you must tell no one where this money came from.” The young man nodded. “Second, you must maintain top grades; I’m not sending you to college to be a playboy.”

25 Throughout his life, he never forgot the day

he’d been given the opportunity he needed to succeed. He also remembered the vow he’d made to do the same for someone else and has since helped several young people through college.

There was one promise the young man made to Max Freed that he couldn’t keep. For nearly 30 years, he told no one the identity of his mysterious benefactor. But he finally decided to tell his story because he felt it would inspire others to help someone, and because he felt that Max Freed deserved the recognition despite wanting to be anonymous.

Each month he visited Freed to report on his progress. At the University of Manitoba, he earned high grades, was near the top of his class and was elected president of the student body.

I often tell this story. It reminds me that no matter what we do in life, no matter how high we climb the ladder of success, we will ultimately be remembered for how we helped others less fortunate than ourselves.

Over three years, Max Freed lent the butcher’s son $990. The young graduate began repaying the debt as soon as he landed his first job after college. He sent Freed $100 the first year, $100 the next and the rest the third year after he graduated.

There’s another reason I love telling this story: I am the butcher’s son.

“Third, this is a loan. You have to pay me back every penny when you can afford to. And lastly, you must promise to do this for someone else in your lifetime.”