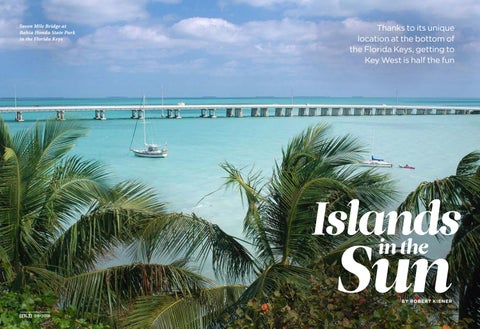 Thanks to its unique location at the bottom of the Florida Keys, getting to Key West is half the fun

West home, begins. “Nibblin’ on sponge cake, Watchin’ the sun bake …” Moments later, I can’t resist and start singing along, drowning out Buffett with my own out-of-tune warbling: Waaaaasted away again in Margaritaville … “WE’RE ALL ABOUT scuba diving, snorkeling and laying about on the beach,” explains noted underwater photographer and longtime local resident Stephen Frink as we sip coffee in Key Largo, my first stop. At 33 miles long, it is the longest of the more than 800 islands that make up the Keys and is often described as “the dive capital of the world.” While some Australians, Pacific Islanders and others may disagree, Key Largo is definitely on every diver’s and snorkeller’s top-ten list. Frink tells me that underwater enthusiasts are lured to the John Pennekamp Coral Reef State Park, the nation’s first undersea park and home to 70 square miles of coral reefs, mangrove swamps and seagrass beds. This protected underwater wonderland, one of the world’s largest coral barrier reefs, is packed with colorful coral canyons and reefs teeming with Technicolor fish. Twenty-five miles down the road, I stop in Islamorada—from the Spanish for “village of islands”—which is comprised of six small islands, or “keys,” linked by US 1. Islamorada is to sport fishing as Key Largo is to diving. This is Grand Central for anglers in search

the early morning sky is impossibly blue and the waters of the Atlantic Ocean—to my left—and the Gulf of Mexico—to my right—are patchworks of glistening aquamarines and brilliant turquoises. Sailboats dot the horizon and game fishing boats head for the nearby Gulf Stream where sailfish, marlin and other trophy fish hang out. I am cruising in a rented convertible with the top down along U.S. Route 1, the 113-mile-long Overseas Highway in the Florida Keys, that necklace of islands that hangs off the southern tip of mainland Florida. My destination: Key West, America’s southernmost, quirkiest and most uninhibited town. As I drive, I am reminded of what Craig Cates, the mayor of Key West, said when I told him I was planning to visit his hometown. “Sure, you can fly down to Key West,” he said. “But you’d be missing one of the world’s most breathtaking road trips if you don’t drive down here.” He also advised me to “slow down” and stop along the way. The top speed on U.S. 1 is just 45 miles per hour, so I can’t help but slow down, all the better to take in the scenery, from kitschy tourist traps and Tiki bars to elegant hotels to cobalt blue waters. “This is paradise,” I say to myself as I slip a Jimmy Buffett CD into the car stereo. “Margaritaville,” Buffett’s bestselling 1977 tribute to his former Key

Clockwise from top left: Hemingway house; diving at an undersea park; for visitors, Key West is all about having fun; a bar where Hemingway drank.

what was originally a railroad bridge funded by Henry Flagler, an oil baron who is credited with opening Florida to the world. The remains of the older bridge are a favorite of bikers, hikers, and fishermen. From Seven Mile Bridge, it’s a 38mile hop, skip, and jump through Big Pine Key, Lower Sugarloaf Key, and Boca Chica Key to Key West.

Watching the sunset from Mallory Square

’VE LUCKED OUT. In Key West,

one of the town’s most knowledgeable citizens has offered to give me a cycling tour of the eightsquare-mile island that one-time resident Ernest Hemingway called “the best place I’ve ever been.” To others it’s known as “the end of the road” or, as a popular local bumper sticker proclaims, “Key West: A quaint little drinking town with a tourist problem.” “I am a Conch,” Dave Gonzales tells me as we climb onto our bicycles. The slim, ever-smiling, white-bearded “unofficial goodwill ambassador” for Key West pronounces it “conk” and explains that it’s a term for Key West natives, who are descendants of early settlers from the Bahamas. It’s derived from the word for the local sea snails. “I was born here as were my parents and grandparents,” says Gonzales, who works as the executive director of one of Key West’s premier tourist attractions, The Ernest Hemingway Home and Museum. We pedal down the town’s main drag, Duval Street, chockablock with

of record-class marlin, swordfish, grouper, snapper, and more. Although I don’t have time to go deep-sea fishing, I do hire a kayak in nearby Tavernier and paddle into the Gulf of Mexico where I come face to face with a manatee, Florida’s official state marine mammal. The manager of the nearby Kona Kai Resort told me that the blubbery-grayish brown beasts, which can weigh more than a ton, were gentle giants. She was right; without acknowledging me, the manatee turned and slipped away underneath the water. Even the animals here are laidback. With Key West on my radar, I start down Seven Mile Bridge. Actually 6.7 miles long, the bridge sits low to the water so it’s like driving across the ocean; there’s nothing but open waters on both sides. The views are stunning and ever-changing, part of the reason it has been featured in many movies, including True Lies and the James Bond film License to Kill. This modern engineering marvel was completed in 1982. It replaced an earlier version, which was built on

taverns, saloons, and restaurants, and stop outside Sloppy Joe’s, one of the bars where Hemingway allegedly drank. I note that it’s enjoying a brisk trade even though it is only a little past 10 a.m. “We work hard at being casual and having fun,” says Gonzales with a broad smile. “And we’ve always been a haven for eccentrics.” As if on cue, I spot a middle-aged man wearing shorts and a gray T-shirt with a huge bird perched on his right shoulder. He informs me that it’s a white cockatoo. “His name is Sailor,” he says. “Say hello, Sailor.” The bird obliges. I ask the man, local resident Lenny Roslan, why he has a cockatoo on his shoulder. “Because this is Key West and we are all pirates here,” he answers with just a hint of a smile. He pauses for a beat. “And Sailor wanted to go to lunch.”

I realize a would-be pirate is fairly low on Key West’s eccentricity scale when I see a man walking down Duval Street. He appears to be in his late 60s and is wearing nothing but a well-positioned sock and a pair of large blue angel wings. When I ask a local hotel owner about the nearly naked man, he tells me, “He’s always out and about. He’s harmless.” As writer Hunter S. Thompson once noted, “Key West is where the weird go pro.” Even the town’s cemetery has its eccentrics. Look closely among the tombstones and you’ll find inscriptions such as “I’m Just Resting My Eyes,” “I Always Dreamed of Owning a Small Place in Key West,” and, my favorite, “I Told You I was Sick.” According to Gonzales, Key West’s rags-to-riches-to-rags history has a lot to do with its welcoming, permissive attitudes. The island was discovered | | 09•2018 [[2R]]

by Ponce de Leon in 1513 and claimed for Spain. The United States took ownership of the Florida Keys in 1822. Thanks to pirates, dangerous reefs, and tricky currents just offshore, Key West flourished as a wrecking community, with local sailors claiming the cargoes of sinking ships. This lucrative salvaging business made Key West the richest city in the United States by the 1850s. When wrecking dried up, locals turned to the sponging and sea salt industries, cigar making, smuggling, and fishing to survive. “We’ve been rich and we’ve been poor, but we’ve always been welcoming,” says Gonzales. “I think that’s why so many offbeat characters feel comfortable settling here.” In 1982 a group of Conchs, including the then-mayor, issued a tonguein-cheek notice that they were officially seceding from the United States. Their newly-minted “Conch Republic” immediately declared “war” on the nation but swiftly surrendered, asking Washington for a billion dol| 09•2018 [[1L]]

lars in foreign aid. To mark the occasion, the Conch Republic Independence Celebration is held every April. The movement’s flag boldly declares, “We Seceded Where Others Failed.” We cycle past neatly kept pastel-colored homes in Old Town, many adorned with gingerbread trim and surrounded by bougainvillea, banyan, and palm trees. After we pass the Harry S. Truman Little White House, where the 33rd president got away from the rigors of Washington, we park our bikes outside the Mel Fisher Maritime Museum. Fisher was a dive shop ownerturned-treasure hunter who searched for riches off Key West for decades. Fisher and his crew eventually recovered more than half a billion dollars’ worth of treasure, much of it brought up from a Spanish galleon that sank off Key West in 1622. “We like the idea that Fisher’s motto was ‘Today’s The Day!’” says Gonzales. Before we end our tour, I have a final question for Gonzales: “What’s the deal with the chickens?” All morning, as we biked through Old Town and along the southern tip of the island, we dodged wild chickens weaving in and out of traffic and scurrying into bars and restaurants to beg for food and eat scraps off the floor. “They are gypsy chickens,” he tells me. The colorful, noisy feral birds are descendants of chickens that were re-

leased years ago and were joined by roosters who were set free after cockfighting became illegal in the 1980s. By 2004 there were so many chickens scurrying about that the town hired a chicken catcher. But pro-chicken Key Westers were never happy with the culling. The position was terminated. Today, the chickens are part of Key West’s colorful fabric, embodying the town’s “live and let live” philosophy. “It’s like the old joke,” says Gonzales. “Why did the chicken cross the road? Because it can.”

IT’S JUST PAST 7:30 p.m. and I’ve joined thousands of Key West tourists and locals at Mallory Square’s Sunset Celebration to salute the sun as it sinks into the Gulf of Mexico, a nightly ritual that started in the late 1960s. The crowds are entertained by acrobats, musicians, magicians, jugglers, and other exotic entertainers looking for donations. As the sun dips toward the horizon, the crowd starts to count down: “Ten, nine, eight, seven …” Once it disappears into the Gulf, everyone applauds and savors the warm afterglow. As I turn to leave, I hear a guitar

player begin a familiar tune: “Nibblin’ on sponge cake,” “Watchin’ the sun bake …” I need a drink. And I know just where to find one.

A journey through the Florida Keys