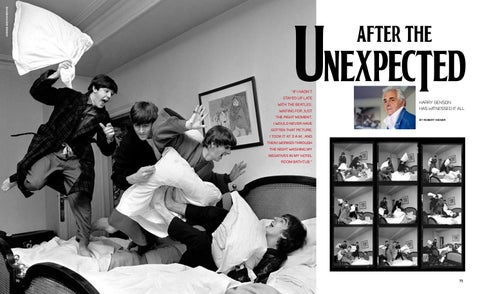 “IF I HADN’T STAYED UP LATE WITH THE BEATLES. WAITING FOR JUST THE RIGHT MOMENT, I WOULD NEVER HAVE GOTTEN THAT PICTURE, I TOOK IT AT 3 A.M., AND THEN I WORKED THROUGH THE NIGHT WASHING MY NEGATIVES IN MY HOTEL ROOM BATHTUB.”

HARRY BENSON HAS WITNESSED IT ALL BY ROBERT KIENER

“HARRY BENSON IS THE WORLD HEAVYWEIGHT CHAMPION: THE PHOTOJOURNALIST WHO HAS OUTSHOT HIS OPPONENTS, OUTLASTED THE FIELD, AND OUTPERFORMED, DAY IN DAY OUT, OVER 65 YEARS BEHIND THE CAMERA.”

“Harry Benson? You’re going to interview Harry Benson?” Liz Smith, the 94-year-old doyenne of the New York City gossip corps, asks when I telephone her about her longtime friend. “He’s a charmer. You’ll love him. Everybody loves Harry.” It’s a comment I’ll encounter again and

Benson,” and then after a pause, “I think I’m half a bump from being in love with Harry Benson.” Neil Leifer, the award-winning sports photographer and longtime friend (and friendly adversary) of Benson’s, says, “Harry is a charmer, but don’t let that friendly manner fool you. He’s as relentless and versatile a photographer as there is.”

“ALL I DO IS TAKE PHOTOGRAPHS.” When I meet Benson, 87, at the recent opening of a retrospective of his photography at Montreal’s Gallery Got, the fabled Benson charm is on full display. Wearing a Savile Row tweed jacket punctuated by his trademark bright green handkerchief, Benson patiently answers questions from the gaggle of Francophone journalists who’ve come to his opening. He’s generous with his time, and after answering a question will often ask, “Is that enough? Do you need any more?” By the end of the conference he has the roomful of reporters in the palm of his hand and receives what surely must be a rarity from this crowd—a standing ovation. Later he pulls me aside and confesses he’s surprised by the turnout. “I didn’t think many journalists would show up,” he says in his bordering-on-falsetto Scottish brogue. When I ask him if he’s serious, he shoots back, “Dead serious!” His voice rises an octave and he continues, “I’m insecure. Always have been. I just don’t think my work is that good.” Benson’s confession is all the more startling given the barrage of accolades he’s received for his lifetime of work. His photography has earned him a CBE (Commander of the Order of the British Empire) from Queen Elizabeth II for his service to photography, honorary doctorates, a Lucie Award for lifetime achievement in portrait photography, and an International Center of Photography Infinity Award in 2017, among other honors. He has to his credit more than 40 solo gallery exhibitions around the world, 14 published photo books (including “Harry Benson: Persons of Interest,” published last month by powerHouse Books), and placement of his images in the permanent collections of the Smithsonian National Portrait Gallery and the Scottish National Portrait Gallery. His prints sell for up to $30,000. David Friend is the former director of photography for Life magazine, where Benson was under contract from 1970 to 2000. In

an article posted this spring on the website The Eye of Photography, he writes, “Harry Benson is the world heavyweight champion: the photojournalist who has outshot his opponents, outlasted the field, and outperformed, day in day out, over 65 years behind the camera.” When I remind Benson that Friend, like many others, has called him “legendary,” he waves his hand dismissively and says, “Don’t be silly. … I’ve always been worried about where my next job was coming from. Inside, I know who I am. And I’m not legendary. All I do is take photographs.”

“I WAS LIKE A RABID DOG.” As his books, exhibitions, and recent documentary illustrate, the octogenarian has photographed seemingly everyone who was anyone over the past half century. And he’s traveled almost everywhere, photographing almost everything. “I admit I was ambitious,” he says with a wry smile. “In fact, I was like a rabid dog.”

In addition to photographing an A-list of entertainment mega-stars, he also reported on the civil rights riots in the American South, conflicts in Bosnia and Kosovo, famine in Somalia, and student protests in China’s Tiananmen Square. He was in the room with Richard Nixon when he resigned, made images of Martin Luther King at a civil rights march, and photographed the Berlin Wall when it went up and when it came down. He stood mere feet from Robert Kennedy when he was assassinated. Indeed, he’s been called “the Zelig of modern photography.” As Neil Leifer explains, “Harry may be best known for his Beatles photographs, but he’s also a first-class photojournalist.” If there is one constant in Benson’s work— from his early days as a struggling newspaper photographer in Scotland to his formative years on London’s Fleet Street to his decades working for Life, People, and Vanity Fair—it is his ability and insistence, as he explains, to “be at the center of things.”

“I have always tried to be first-in, first-out, going right away for the heart of a story and hanging in there,” says Benson as he flips through a book of his iconic photographs. He stops at his much-reproduced 1964 picture of The Beatles in Paris’ Hotel George V, “The Pillow Fight.” It may be his best known photo, the one that he admits will appear in the first line of his obituary. “If I hadn’t stayed up late with The Beatles, waiting for just the right moment, I would never have gotten that picture,” he says. “I took it at 3 a.m., and then I worked through the night washing my negatives in my hotel room bathtub.” Striving to get to the middle of events, also meant breaking rules, he admits, something he honed to perfection when working on ultracompetitive Fleet Street. For example, to get his evocative image of a soulful Pat Nixon watching her husband announce his resignation in 1974, he broke free from the penned up photographers to get the angle

he wanted. “I knew she would be emotional, and I had to be in just the right spot to catch that moment,” he remembers. “And I got it.” On an assignment to photograph Barbara Streisand while she was performing in New York City’s Central Park, he left the scrum of photographers and approached the stage for a unique angle. He nailed it, then Streisand glared at him. “I got a great picture that no one else got, but she wasn’t happy,” remembers Benson. Spotting him after the concert, Streisand gave him a piece of her mind, he says, and it wasn’t a pleasant piece. Other stories required a lighter touch. When Life assigned him to photograph a California couple, Reg and Maggie Green, who had donated their son’s organs after he was killed in Italy, he was gentle yet determined. “We have been photographed by scores of professionals but Harry stands out from all the rest,” remembers Reg Green. “He has a style and majesty all his own. He was never perfunctory; with Harry you always felt a

piece of art was being created. His pictures were perfect.”

“THERE ARE NO EXCUSES.” Reflecting on his years as a photojournalist, Benson explains that every story, no matter how difficult the circumstances, presents opportunities for success: “There are moments that a door will open for you. And you have to be like a dog and rush through it. There are no excuses. You have to come back with the goods.” He left cutthroat Fleet Street for the less ruthless American media in 1967, which he likens to “moving to a dude ranch.” He remained fiercely competitive. A 1984 BBC documentary described the transition: “The Doberman still had all its teeth even though it might have been house trained.” Studio portraits and fashion photography hold little interest for Benson. “A great photograph is a moment in time that can never happen again,” he explains. “I’m not interested in making a picture that I can repeat. I am after the unexpected.” He loves what Henri Cartier Bresson dubbed “the decisive moment,” he explains. And it was the Robert Louis Stevenson poem, “From a Railway Carriage,” which describes the fleeting scenes viewed from a passenger train, that captivated and inspired him when he was a schoolboy: “Here is a cart run away in the road / Lumping along with man and load; / And here is a mill and there is a river: / Each a glimpse and gone for ever!” After reading aloud the poem, which he’s read hundreds of times since grade school, he says, “That last line, ‘Each a glimpse and gone forever,’ has always stuck with me and is the real key to my photography. I am always hoping to capture that unique moment that cannot be duplicated, that special instant that comes and then vanishes like a comet.” • Robert Kiener is a writer in Vermont.

On ppmag.com How Harry Benson captured the assassination of Bobby Kennedy ppmag.com/witness-to-history