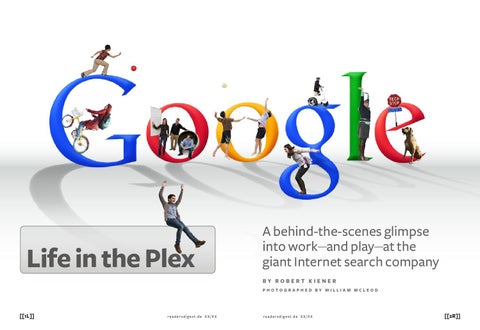 Life in the Plex

just after 9 a.m. and I’m standing outside the Silicon Valley U.S.A. headquarters of Google, the hugely successful Internet search company whose name has entered the international lexicon. Most of the world doesn’t “search” the Internet, it “Googles” it. Under an impossibly blue California sky, I watch hundreds of “Googlers,” as the company’s employees are known, stream into the 26-acre Googleplex, a collection of low-rise, landscaped office buildings. T-shirts are

prove some widely held beliefs—and rumors—about this company that in 13 years has grown from a tiny Internet search startup to a multinational colossus that employs more than 32,000 people in 60 offices around the world. For example, does Google know everything about us by how we search the Internet? Should we care? Do Googlers spend most of their time skateboarding around their offices, shooting pool or playing practical jokes on one another? Aren’t most Googlers 20-something millionaires?

We like to combine fun with business. It’s called being ‘Googley’.” —Cliff Redeker, Google “Impresario”

big here. Many people have backpacks, others carry computer notebooks tucked under their arms or even open in front of them. Some tote bags of dirty laundry. (More on that later.) I’ve been invited by Google management to the Googleplex for an exclusive, behind-the-scenes look into this highly secretive operation. Google has promised me unprecedented access to its facilities and employees. I’m hoping to prove or dis[[1L]]

Do they even hire anyone older than 30? And is Google, which made nearly $38 billion in revenue in 2011, about to take over the world?

To explore the sprawling Goog-

leplex I jump on one of the hundreds of bicycles that are left around the campus for employees to use. I ride along with Cliff Redeker, 28, the company’s “Impresario,” who organizes the visits of celebrity speakers to the Googleplex. As we pedal the tradereadersdigest.de XX/XX

mark blue, red, yellow and green bikes past glistening glass and steel buildings, Redeker tells me, “We like to combine fun with business. It’s called being ‘Googley’.” As we park our bikes outside Building 43, I spot a Googler wearing old jeans and a polo shirt dashing up the steps with a guitar sticking out of his backpack. When I tell Redeker that’s not something you’d see at many other companies, he tells me, “That’s our CFO, Patrick Pichette. We are casual at Google.” Indeed, how many other companies have a corporate philosophy that notes, “You can be serious without a suit”? As I learn quickly at Google, it’s a cardinal sin to take oneself too seriously. After passing through Building 43’s security check, we bump into Wanda readersdigest.de XX/XX

Beyond the reception desk a slide curves down from the floor above, a quirky alternative to stairs.

Hung, who works in the Search department. She’s accompanied by her four-year-old-dog Lily, a striking white-haired Samoyed. “She’s been coming to work with me since she was four months old,” says Hung. “She loves it here. So do I.” Redeker and I walk on. A Googler wearing roller blades and clutching a notebook zips by us. I meet several workers who have ditched their office chairs to sit on giant, inflatable exercise balls. At a snack bar that offers everything from organic yogurt to freshly roasted coffee to energy bars (all free), Redeker tells me that Sergey Brin and co-founder Larry Page wanted employees to feel free to snack whenever they got the urge. “They dictated that no Googler should be more than 150 feet away from a [[2R]]

micro-kitchen,” he tells me. There are more than 150 micro-kitchens in the Googleplex. Food, all free, is a big deal at Google. There are 25 cafes, including 11 gourmet restaurants, that serve everything from fried calamari with Chinese sausage to rack of lamb to vegetarian youname-it, at a reported annual cost to Google of more than $70 million. New staff report having to cope with what’s called the “Google 15.” Says Redeker, “That’s the 15 pounds they put on after they start working here.” No worry; they can then head to one of the firm’s six free gyms to work it off. And those laundry bags I saw? “We have washing machines and dryers here so employees can do their laundry while they work,” says Redeker.

Back on our bikes

Redeker laughs when I ask him if the rumors about so many Googlers becoming millionaires are true. “I wish!” he says. “Many of the early employees became millionaires when the company went public but things are different now.” [[1L]]

be the mid-thirties. Mangolini and her team receive a staggering two million resumes a year, all competing for roughly 8000 positions. Less than one percent of the applicants will get hired. When I ask her about all the employee perks, such as the free food, the company lounges, the ubiquitous foosball and pool tables, she confesses that there is a method to Google’s madness. What looks to an outsider like “playtime” is often much more serious. “All of these things make Googlers’ working lives easier and fun but they also promote collaboration,” she explains. “There’s very little hierarchy here and we encourage crossfertilization.” She reminds me that the engineers I may have seen playing ping-pong or volleyball were probably also talking

Salaries are a closely guarded secret but new hires can easily earn more than $100,000. Okay, but aren’t all new hires in their twenties? “That’s another misconception,” says Yolanda Mangolini, a director within People Ops (Human Resources) as we sit at a quirky playground-type bench inside her department. “We hire lots of people in their thirties, forties and older.” Although Google doesn’t release information on age of workers, the average appears to readersdigest.de XX/XX

over their latest project. “It’s one of the ways we get things done here.” Another novel Google concept is “20 Percent Time.” Says Mangolini, “Sergey and Larry want all Googlers to devote 20 percent of their time to work on any project they are interested in.” She notes that such products as Gmail, Google’s wildly successful email system, Google News and others were developed during Googlers’ 20 percent time.

One of the company’s shining

stars is Jack Menzel, director of Product Management at Google Search. He’s part of the team that is continually refining Google’s complex search operations. As we sit in a third-floor conference room he attempts to explain to me what happens when someone types a search query into Google’s search engine. I say, “attempt” because Menzel is so bright and the process is so complicated that I can barely understand what he is saying. “Why don’t you pretend you’re explaining this to a 10-year-old, Jack?” I ask. It doesn’t help much. Finally, he just types my name into the search engine. In less than a second, .22 of a second to be exact, Google produces “about 3460” results, each of which contains my ex[[2R]]

act name. “It’s remarkable, isn’t it,” says the bright-eyed, bespectacled Menzel, “Sometimes it even blows my mind!” The company’s worldwide network of computer servers is constantly “crawling” the billions of pages that make up the Internet to help build its own “representation” of the Internet.

matching paid advertisements to users’ search results, Google has risen from a revenue-free startup in 1998 to become one of the most profitable companies in the world. Should we be worried by the vast array of information Google captures about its users? “The reason we keep track of your searches is to keep improving our search process,” Menzel tells me. He reminds me of one of the company’s informal mottos, “Don’t Be Evil,” and says, “We take that very seriously.” Not everyone agrees. Google’s critics have blasted it for everything from violating antitrust laws to being an unfair competitor to trying to monopolize search processes.

Don’t Be Evil,” is one “ofmottoes. the company’s “We take that very seriously.” —Jack Menzel, Google Search Menzel asks me to imagine the Internet is a vast library. “Every time it adds a book, we record it—as well as everything that’s inside that book. Then we scan it for your name.” Again, his eyes light up. “It’s mind boggling, isn’t it?” “Now, what’s equally amazing is that we also give you those results according to how relevant we think they are to you. And we do all that in less than a quarter of a second!” Page rankings are derived from more than 200 different signals, which can include the user’s past searches; rankings are generated by complex algorithms— software programs that direct the search. These proprietary algorithms are the company’s “secret sauce,” and are entrusted to only a select few. By perfecting their search engine and [[1L]]

I am finally admitted to the com-

pany’s usually off-limits, super-secure and highly secretive Security department. “Welcome to ‘SecurityLand’,’ says Ian Fette, product manager with Google’s 200-strong Security Team, as he ushers me through doublelocked doors into the third-floor offices. “Not many outsiders get in here.” As we walk through the department I see scores of security engineers intently poring over lines of complex computer coding that fill their huge twin monitors. No one looks up; each is a study in concentration. These are some of the world’s most accomreadersdigest.de XX/XX

plished software engineers. They are Google’s elite, the first line of defense against hackers, “crackers” and Bad Guys. Fette and the department’s antimalware and anti-phishing teams do constant battle, protecting Google and its users from a daily barrage of attackers intent on crippling the search engine giant or stealing information from users’ accounts. “Protecting our users’ data is what keeps me awake at night,” says Fette. These cyber attacks range from the proverbial 15-year-old in his pajamas to sophisticated cyber attacks launched by skilled hackers or even governments. “We try to keep one step ahead of the attackers. They are constantly evolving and so are we,” explains Fette, a Carnegie Mellon computer science graduate who speaks German and Japanese, flies his own plane and once worked for the USA’s Defense Intelligence Agency. “It’s the new Cold War.” Last June the Security Team uncovered a sophisticated, China-based attack that hacked into the personal Google email accounts of hundreds of people, including top U.S. officials, military personnel, journalists and Chinese political activists. To cope with such a sophisticated cyber crime, the team declare a “Code Red” and send an elite team of security experts into the department’s war room, the nearby Incident Response Area. As we walk by the room I notice the door’s series of locks and signs that read, “Restricted Area,” “No Visitors” readersdigest.de XX/XX

and “Authorized Googlers Only.” “Any chance I could peek inside?” I ask Fette. “Sure, but then we’d have to kill you,” he jokes. At least I think he was joking.

Will Google take over

the world, as some fear? Unlikely, but part of the corporate vision is to look for “uncomfortably exciting ideas that can change the world,” as Larry Page likes to say. After my four-day visit to the Googleplex, news was leaked that the firm’s California-based top-secret, clandestine laboratory, dubbed Google X, is working on such outlandish inventions as an elevator that could transport people into outer space via a cable instead of a rocket, driverless cars, robots that would go to work while their human owners stay home and even more outlandish ideas. Sound crazy? Those driverless cars are already here; Google introduced the world’s first working robot-controlled car in 2010 and it has driven roughly 200,000 miles on Nevada’s and California’s highways since then. As Jack Menzel likes to say, “It’s mind boggling, isn’t it?”

Life in the Plex: A behind-the-scenes look at Google's Headquarters