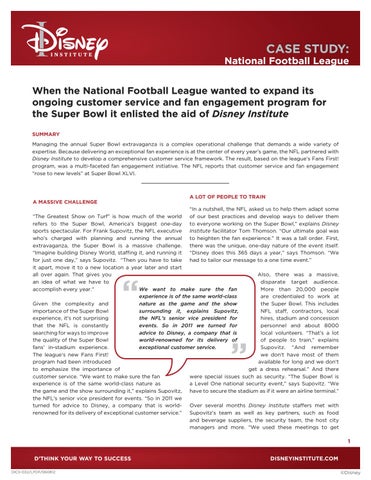 National Football League When the National Football League wanted to expand its ongoing customer service and fan engagement program for the Super Bowl it enlisted the aid of Disney Institute SUMMARY Managing the annual Super Bowl extravaganza is a complex operational challenge that demands a wide variety of expertise. Because delivering an exceptional fan experience is at the center of every year’s game, the NFL partnered with Disney Institute to develop a comprehensive customer service framework. The result, based on the league’s Fans First! program, was a multi-faceted fan engagement initiative. The NFL reports that customer service and fan engagement “rose to new levels” at Super Bowl XLVI.

A LOT OF PEOPLE TO TRAIN

“In a nutshell, the NFL asked us to help them adapt some “The Greatest Show on Turf” is how much of the world of our best practices and develop ways to deliver them refers to the Super Bowl, America’s biggest one-day to everyone working on the Super Bowl,” explains Disney sports spectacular. For Frank Supovitz, the NFL executive Institute facilitator Tom Thomson. “Our ultimate goal was who’s charged with planning and running the annual to heighten the fan experience.” It was a tall order. First, extravaganza, the Super Bowl is a massive challenge. there was the unique, one-day nature of the event itself. “Imagine building Disney World, staffing it, and running it “Disney does this 365 days a year,” says Thomson. “We for just one day,” says Supovitz. “Then you have to take had to tailor our message to a one time event.” it apart, move it to a new location a year later and start all over again. That gives you Also, there was a massive, an idea of what we have to disparate target audience. accomplish every year.” We want to make sure the fan More than 20,000 people experience is of the same world-class are credentialed to work at Given the complexity and nature as the game and the show the Super Bowl. This includes importance of the Super Bowl surrounding it, explains Supovitz, NFL staff, contractors, local experience, it’s not surprising the NFL’s senior vice president for hires, stadium and concession that the NFL is constantly events. So in 2011 we turned for personnel and about 8000 searching for ways to improve advice to Disney, a company that is local volunteers. “That’s a lot the quality of the Super Bowl world-renowned for its delivery of of people to train,” explains fans’ in-stadium experience. exceptional customer service. Supovitz. “And remember The league’s new Fans First! we don’t have most of them program had been introduced available for long and we don’t to emphasize the importance of get a dress rehearsal.” And there customer service. “We want to make sure the fan were special issues such as security. “The Super Bowl is experience is of the same world-class nature as a Level One national security event,” says Supovitz. “We the game and the show surrounding it,” explains Supovitz, have to secure the stadium as if it were an airline terminal.” the NFL’s senior vice president for events. “So in 2011 we turned for advice to Disney, a company that is worldOver several months Disney Institute staffers met with renowned for its delivery of exceptional customer service.” Supovitz’s team as well as key partners, such as food and beverage suppliers, the security team, the host city managers and more. “We used these meetings to get

National Football League everyone’s input on developing a service framework for the Super Bowl,” says Terrie Parker, Disney Institute custom development manager. “From the beginning this was a partnership.” The final plan that evolved included, and was built on, the NFL’s Fans First! customer service concept. “Our “Fans First Service Framework” was comprised of the quality standards of safety, hospitality, entertainment and efficiency,” says Thomson. Although the service framework incorporated many of Disney’s best practices, the entire package was NFL-branded. “It was important to present this to the audience as an NFL product,” adds Parker. COLLATERAL TOOLS Thomson, Parker and other Disney Institute staff members presented the service framework to some 200 managers in Indianapolis, site of Super Bowl XLVI. Included in the presentation was a comprehensive communications plan, the Leader Communications Tool Kit, designed to help the managers deliver the program to their own employees. To help support the plan’s Fans First! philosophy, Parker and her team designed “collateral tools” management could use. Disney Institute developed 5000 Recognition Cards to be handed out to workers who were spotted exceeding fans’ expectations. Workers could then go to a website, enter the unique code from their card and earn a reward. Three hundred commemorative Challenge Coins were awarded to workers for “exceptional” customer service. “Disney stresses the importance of recognizing and rewarding great behavior,” explains Parker. “It’s an excellent way to build a service culture.”

“TOOK OUR SERVICE TO A NEW LEVEL” On game day the results of the Fans First! Initiative were evident all around the stadium. There were hundreds of examples of “teammates” working to create memorable moments for fans. After the game raves from happy fans poured in: -- “Never have I observed and interacted with so many friendly, sincere and accommodating people.” -- “I was absolutely amazed at the organization and the utmost courtesy shown by the entire staff…It shows it is possible to be efficient and friendly at the same time.” -- “This man had a smile on his face every morning, always polite with us, his staff, the man was on point.” Comments from workers who were given Recognition Cards for excellent customer service also reflected the Initiative’s success. As one explained, “I have gone above and beyond what was expected of me and in return was given my Fans First! nomination card. A little appreciation goes a long way.” Another noted, “It was great to be able to help and see how pleased the fans were with our service.” Frank Supovitz explains, “This initiative took our service to a new level. Partnering with Disney Institute helped us raise our game.” Adds Supovitz, “Super Bowl XLVI was a great success. But we’re not resting on our laurels. We’re continuing to work with Disney Institute to make XLVII even better.”

Each Super Bowl worker was also provided with a Fans First! wallet-size Service Card that spelled out the plan’s quality standards and reinforced the need to “create excitement and lifetime memories at America’s greatest sports event.” The cards also included the reminder, “I am part of Super Bowl history.” Explains Thomson, “It was important to stress to workers that they were an intrinsic part of the fan experience.” Prior to game day, Thomson and other Disney Institute executives rolled out the Fans First! Initiative to more than 3500 Super Bowl “teammates” at the Lucas Oil Stadium.