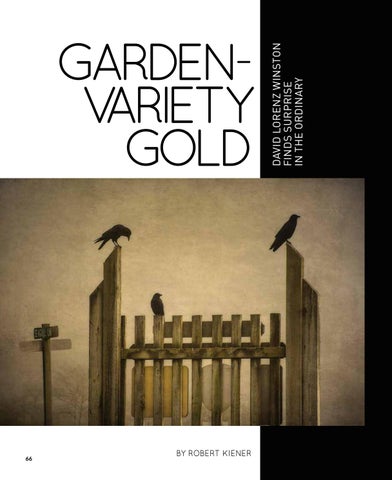 Y You know the image: a moody, elegant, slightly sepia-toned shot of a leafless maple tree in a snow-covered field intersected by a zigzagging fence. The simple black fence leads your eye from the snow-white foreground to the majestic maple, then into the picture’s fog-shrouded background. It is at once serene, peaceful, and intriguing. Of course you know it. It’s “Solitude,” and it’s one of the best-selling images of all time. More than 400,000 posters and prints of it have been sold since it was photographed over three decades ago. It’s an international icon. It continues to sell online through eBay and Amazon, among others, as well as in retail venues as varied as Wal-Mart, Sears, Staples, and art galleries around the world. Who made “Solitude?” His name is David Lorenz Winston, and he’s not surprised if you don’t recognize his name. Nor does he care. “It’s one of those things,” says the 73-year-old Oregon-based photographer. “I am happy that so many people like the picture. I call it my one-hit wonder, and I’m fine with the idea that it will be mentioned in the first line of my obituary.” After a slight pause, Winston adds, “While I am thankful that its sales have helped me make a living as a photographer, there’s a lot of my work I prefer to it. I’ve come a long way since shooting it.”

ECLECTIC FASCINATIONS Just how far Winston has come is evident by reviewing his portfolio and looking over his CV. After studying photography at Pennsylvania State University in the mid-1960s, he’s worked as a teacher and a photographer with scores of one-man shows and awards to his credit. Early in his career he sold much of his work via a network of arts-and-crafts shows up and down the East Coast (“One year I did 32 shows!”) before the corporate world discovered his work. His photographs have hung in collections owned by IBM, DuPont USA, Verizon, Hilton Worldwide, the University of Pennsylvania, and many hospitals. Winston’s photographs, picturing images

as diverse as majestic landscapes to quirky people, reflect his eclectic fascination with both Mother Nature and human nature. “I have always been intrigued with juxtaposition or finding surprises in the ordinary,” he explains. For example, in a series of quick, opportunistic photos titled “Cellular,”

he turns the ordinary moment of someone checking their cell phone into often whimsical, always interesting vignettes. Others of his street photos have the depth and complexity of precisely posed portraits. “I like photographing people as they really are, not posed. It’s a challenge and so

much more frenetic than shooting nature,” says Winston. “I am always looking for more than the subject alone; I want to show a relationship, the gestalt, between subjects even if they are disconnected.” His photographs of people, like many of his nature pictures, are multi-leveled, inviting the viewer to discover

the story behind or within the picture. “Some of David’s subject matter may not be unique, but his pictures and his voice are,” explains Katy Daly, director of product development at McGaw Graphics, a distributor of some of Winston’s best-selling work, including “Solitude.” “His work makes you want to stop, look, and wonder, Hmmm, what’s going on here? There is always a distinct mood to his pictures and a purity.”

FRUSTRATED PAINTER Winston admits that many people often describe his work as “painterly.” He explains, “I get that a lot. I am a frustrated painter and have always had a painterly instinct. I think I also have a strong sense of composition and am often looking for drama, such as dramatic lighting, in my photographs.” He’s also a big fan of fog. “Fog simplifies things and I think an artist’s job is to simplify,” he says. “Fog creates a mood and I think it helps with composition because what is up close is pretty clear and sharp but everything recedes quickly, giving you this contrast with the foreground and the muted background.”

He remembers working for several days in Shenandoah National Park early in his career and being upset because he was fogged in every day. “Sometimes I couldn’t see more than 15 feet in front of myself, but I kept shooting. When I got home I was amazed to discover that those pictures were some of the best I had ever taken. Ever since then I’ve been chasing fog.” As he’s gotten more experienced (“Or maybe just older!” he jokes), he’s become more patient with his photography. “It took me a long time to slow down,” he explains. “I am like a miner always looking for a treasure, something that excites me, but I’ve learned to accept the fact that I don’t always find it. I used to feel my photography outings were successful or not based solely on getting something I liked. But my attitude has changed. Now I feel if I go out and get excited that is worth as much as getting a good picture. It’s more a case of ‘Be Here Now.’” He’s also learned that it’s not necessary to travel to new and exotic locales to produce compelling work. “I often go to the same place frequently to challenge myself to show a scene in

a different way or add something unexpected. If you want to stand out and be acknowledged for your work you have to be different.” Although he’s photographed in such exotic places as Siberia, Peru, India, Nepal, and Tibet, he claims to have done his best work in his own backyard. “It’s easy when you are traveling to a place you’ve never been to be swept away and mesmerized by surface values. But then you come home and see that you have produced the same pictures as everyone else who went there and was also swept away. I prefer the challenge of making a compelling picture of a place I have seen time and time again,” he explains.

TESTAMENT TO PERSEVERANCE All of which brings us back to “Solitude,” which has undoubtedly sold even more copies in the time you’ve been reading this article. “I grew up and was not living far from that spot at Newtown Square outside Philadelphia and knew it well,” says Winston. “In fact, I learned to drive as a teenager in a battered 1961 VW on nearby roads and had photographed the tree and the zigzagged fence before.”

A storm had blanketed the field with snow, and fog had moved in. Winston jumped in his car to revisit the spot and make the photograph. “I knew it would look wonderful,” remembers Winston. “And it did. It was a magical moment.” The image, a testament to Winston’s eye and perseverance, still pays him royalties and has inspired hundreds of letters from fans who tell him how it’s touched their lives in various ways. “It never fails to amaze me that this picture has impacted so many people,” says Winston. “I took it, but it has taken on a life of its own.” • davidlorenzwinston.com Robert Kiener is a writer in Vermont.

The current U.S. law is almost impossible to enforce...and this is WRONG! YOU can help FIX THIS! We’re about to put an end to copyright abuse with a real solution for the first time in 40 years!

1. Go to PPA.com/Grassroots 2. Sign up to say you support this change 3. Tell other photographers and visual artists to do the same!

Congress is currently reviewing a Small Claims option that would help visual artists like never before. You can make a difference! Get involved!