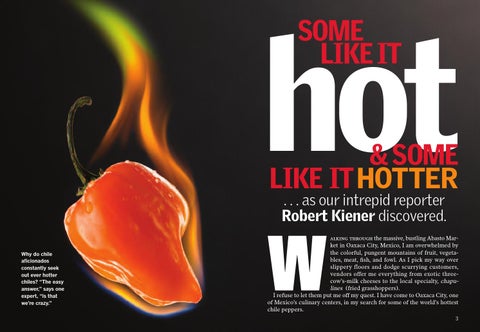 hot &amp; SOME LIKE ITHOTTER . . . as our intrepid reporter Robert Kiener discovered. Why do chile aficionados constantly seek out ever hotter chiles? “The easy answer,” says one expert, “is that we’re crazy.”

alking through the massive, bustling Abasto Market in Oaxaca City, Mexico, I am overwhelmed by the colorful, pungent mountains of fruit, vegetables, meat, fish, and fowl. As I pick my way over slippery floors and dodge scurrying customers, vendors offer me everything from exotic threecow’s-milk cheeses to the local specialty, chapulines (fried grasshoppers). I refuse to let them put me off my quest. I have come to Oaxaca City, one of Mexico’s culinary centers, in my search for some of the world’s hottest chile peppers. 3

My guide, noted Mexican cooking expert and cookbook author Susana Trilling, leads me around a corner and we come upon stall after stall of chile peppers in every conceivable shape, size and color. They are piled high on wooden crates, spill out of plastic laundry baskets and overflow from brown burlap sacks “We have a wider variety of chile peppers here than almost any other place in the world,” Trilling declares. Indeed, chile pepper fanatics from around the world, known as “chile-heads,” make pilgrimages to this market to worship at the altar of the humble, but addictive, fruit. Trilling greets a chile pepper vendor like an old friend and begins pointing out the different varieties: dark brown chipotles, the spherical cascabel, the dried red guajillo, green and red serranos, ten-centimetre-long long mirasol, bullet-shaped piquins, the jalapeno At another stall she shows me some habaneros – lantern-shaped, bright orange chiles that look beguilingly beautiful. As I reach for one, Trilling grabs my arm. “Don’t touch that one unless you’re wearing gloves,” she tells me. “It’s dangerously hot.” If you don’t wear gloves and absentmindedly rub your eyes, it will be very painful, she adds. I ask what would happen if I bit off a small sample. “It will rip off the top of your head!” she replies. Her tone and her suddenly stern, deep brown 4

eyes convince me she’s not kidding. Despite the warning, I won’t be able to resist the lure of the Habaneros for long.

It’s a hot, hot world: harvesting chiles in Ahmedabad, India, (above left) and selling them in Hanoi, Vietnam, (above) and Sulawesi, Indonesia.

It is estimated that one in four people eats chiles every day. They are an integral part of diets around the world, from Mexico and the Middle East to Thailand and Korea. Chiles were first domesticated in South America, in what is now Bolivia, some 6000 years ago. Incas called the spicy fruit aji, and the Aztecs changed it to chilli. Thanks to Christopher Columbus, the newly christened chiles spread to Europe in the late 1400s. Portuguese and Spanish traders introduced them to Africa and Asia, where they were such a hit that locals soon viewed the

import as their own. Today, because of their popularity and ease of cross-pollination, there are thousands of varieties around the world. Thais eat more hot peppers – five grams per person per day – than anyone else in the world. India produces more chile peppers – over 2 millions acres worth – than any other country. Hungary’s famously pungent condiment, paprika (from the Latin for “pepper”), is derived from hot sweet red peppers. Paprika seeds are considered to be so valuable that the Hungarian government forbids their

export. Chile peppers have long been a part of folklore around the world. They were used to deter vampires and werewolves in Eastern Europe and thought to ward off the “evil eye” by South and Central Americans. In northern Mexico chiles are still used in potions meant to make an enemy ill, and as a cure for hangovers. 5

Everywhere you go, the first rule of chiles seems to be: the hotter the better. Recently, near the ancient Punjab town of Multan, a Pakistani friend told me over a dinner that featured an eyewatering variety of fiery chiles, “There’s no such thing as a chile that’s too hot.” Why do chileheads crave hotter and hotter chiles? “The easy answer is that we’re crazy,” says Dave DeWitt (also known as “Pope of Peppers”), author of a slew of chile pepperrelated books and founding editor of Chili Pepper Magazine. But there’s also a physiological explanation. Your body releases endorphins to counter the pain brought on by a red-hot chile. “Those endorphins create a mild euphoria or a minihigh or a pepper-high,” says DeWitt. The Aztecs labeled chile peppers on a wonderfully descriptive scale that included “hot,” “brilliant hot” and “runaway hot.” More recently, scientists developed the Scoville scale to do the same job. Mild jalapenos can range up to 5,000 Scoville units, while the frighteningly hot habanero (the Mexican chile Susana Trilling warned me about) can top 300,000 Scovilles. 6

Susana Trilling explores the many varieties of chiles at the Etla village market close to Oaxaca City, Mexico.

To see firsthand how powerful some peppers can be, I travel with Trilling some five hours west of Oaxaca City to Chalcatongo. “We’re going to meet Oaxaca’s ‘Queen of the Chiles’, Annalyse Ramirez Martinez,” Trilling explains as our car climbs higher and higher into the Sierra Madre Mountains. “She’s an expert cook and chile pepper dishes are her specialty.” When we arrive in the bustling marPHOTO: © ROBERT KI ENER

ket town, we buy a bagful of especially pungent chiles, the small, dried red chile costeno. They will be the main ingredient in a dish, salsa de barbacoa, Annalyse is making specially for us. Chile peppers get their kick from a chemical called capsaicin located in the inside wall of the pepper pod. When we arrive at Annalyse’s modest wood frame home, Trilling explains how potent capsaicin can be. The Incas burned red peppers to temporarily blind invading Spaniards, and the Mayans punished offenders by forcing them to inhale the acrid smoke of burning peppers. These days, police forces fight off bad guys with pepper spray and tear gas made from capsaicin “And we roast some chile peppers to drive the snakes out of our homes,” adds petite, black-haired Annalyse. Suddenly, the deceptively mildlooking chile costeno, which had been bubbling on Annalyse’s gas range, starts smoking. The small kitchen fills with pungent, acrid smoke. My eyes immediately start watering and I am soon convulsed by fits of coughing. I can bear it for less than a minute before I dash out into the courtyard, drop to my knees and breathe in deep gulps of fresh air. And I didn’t even eat one of them, I think as I regain my composure. The story of the chile is not all pain and tears. Scientists have discovered that a raw pepper has more vitamin C than an orange. This year University

of Nottingham researchers published findings that show capsaicin may be able to kill cancerous tumors. Other studies suggest capsaicin reduces cholesterol and pain associated with arthritis, diabetes, and muscle and joint problems. Scientists at Germany’s Max Planck Institute claim chile peppers may prevent the formation of blood clots. Hot peppers can also ease the symptoms of the common cold by breaking up congestion and reducing mucous. “It seems like there’s no end to chile peppers’ versatility,” says Danise Coon, program coordinator of New Mexico State University’s Chili Pepper Institute. The institute recently hit the headlines when the Guinness Book of World Records confirmed that one of its professors, Paul Bosland, had measured the heat level of the world’s hottest chile pepper using the scientifically developed Scoville Scale. The Bhut Jolokia, with a rating of just over one million, is nearly twice as hot as the former record holder, the Red Savina pepper. My trip to Mexico is nearing its end, and I can put off the inevitable no longer. It’s time to sample Mexico’s hottest chile pepper, the habanero. A plastic bag containing a half dozen of them sits on the desk of my Oaxaca City hotel room. Recalling Trilling’s advice not to touch them with my bare hands, I pull on disposable plastic gloves. I’ve learned that water is useless in putting out the fire that hot chiles light 7

in your mouth. Instead, I have a quart of milk and some yogurt nearby; the proteins in milk will help neutralize the capsaicin. Like a surgeon, I carefully cut a tiny sliver of the flesh from one of the fourcentimetre-long pods. Using a toothpick, I place it on my tongue… A bomb instantly goes off in my mouth. My tongue is on fire. My upper palate feels like it’s been hit with a flamethrower. “HOT, HOT, HOT!” I scream. My eyes water, I begin gasping for breath. Beads of perspiration roll down my forehead. Surely, I think, my head will soon explode. How can a

tiny slice of chile pepper pack such a punch? I gulp down the milk and some yogurt but it is several hours before my mouth returns to something resembling normal. I don’t remember an endorphin rush. Later that day I decide to reward myself with a bowl of mango ice cream at a stall in the Benito Juarez Market. The five-alarm habanero seems a distant memory. Then, as I raise the spoon to my lips, the stall’s owner holds out a small bowl and asks, “Would you like chile sauce on that?”