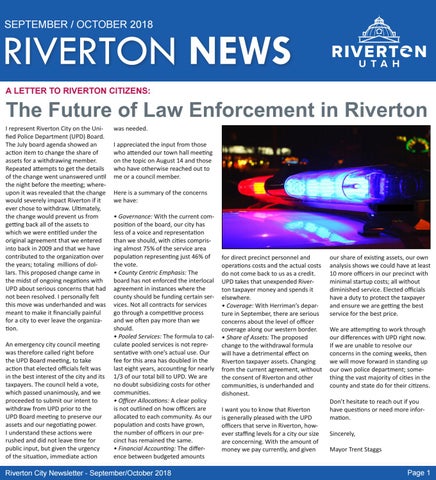 The Future of Law Enforcement in Riverton

I represent Riverton City on the Unified Police Department (UPD) Board. The July board agenda showed an action item to change the share of assets for a withdrawing member. Repeated attempts to get the details of the change went unanswered until the night before the meeting; whereupon it was revealed that the change would severely impact Riverton if it ever chose to withdraw. Ultimately, the change would prevent us from getting back all of the assets to which we were entitled under the original agreement that we entered into back in 2009 and that we have contributed to the organization over the years; totaling millions of dollars. This proposed change came in the midst of ongoing negations with UPD about serious concerns that had not been resolved. I personally felt this move was underhanded and was meant to make it financially painful for a city to ever leave the organization. An emergency city council meeting was therefore called right before the UPD Board meeting, to take action that elected officials felt was in the best interest of the city and its taxpayers. The council held a vote, which passed unanimously, and we proceeded to submit our intent to withdraw from UPD prior to the UPD Board meeting to preserve our assets and our negotiating power. I understand these actions were rushed and did not leave time for public input, but given the urgency of the situation, immediate action

I appreciated the input from those who attended our town hall meeting on the topic on August 14 and those who have otherwise reached out to me or a council member. Here is a summary of the concerns we have: • Governance: With the current composition of the board, our city has less of a voice and representation than we should, with cities comprising almost 75% of the service area population representing just 46% of the vote. • County Centric Emphasis: The board has not enforced the interlocal agreement in instances where the county should be funding certain services. Not all contracts for services go through a competitive process and we often pay more than we should. • Pooled Services: The formula to calculate pooled services is not representative with one’s actual use. Our fee for this area has doubled in the last eight years, accounting for nearly 1/3 of our total bill to UPD. We are no doubt subsidizing costs for other communities. • Officer Allocations: A clear policy is not outlined on how officers are allocated to each community. As our population and costs have grown, the number of officers in our precinct has remained the same. • Financial Accounting: The difference between budgeted amounts

for direct precinct personnel and operations costs and the actual costs do not come back to us as a credit. UPD takes that unexpended Riverton taxpayer money and spends it elsewhere. • Coverage: With Herriman’s departure in September, there are serious concerns about the level of officer coverage along our western border. • Share of Assets: The proposed change to the withdrawal formula will have a detrimental effect on Riverton taxpayer assets. Changing from the current agreement, without the consent of Riverton and other communities, is underhanded and dishonest. I want you to know that Riverton is generally pleased with the UPD officers that serve in Riverton, however staffing levels for a city our size are concerning. With the amount of money we pay currently, and given

our share of existing assets, our own analysis shows we could have at least 10 more officers in our precinct with minimal startup costs; all without diminished service. Elected officials have a duty to protect the taxpayer and ensure we are getting the best service for the best price. We are attempting to work through our differences with UPD right now. If we are unable to resolve our concerns in the coming weeks, then we will move forward in standing up our own police department; something the vast majority of cities in the county and state do for their citizens. Don’t hesitate to reach out if you have questions or need more information. Sincerely, Mayor Trent Staggs

Businesses will no longer be charged licensing fees to conduct business in Riverton, following the Riverton City Council’s final approval of the city’s 2018-2019 fiscal year budget and fee schedule in their June 19 meeting. Mayor Trent Staggs first proposed eliminating the city’s commercial business licensing fees in the budget he presented to the city council on May 1. The move, the first of its kind in Salt Lake County, essentially makes it free to do business in the city. “We understand the value our local businesses provide to our city and our residents,” said Staggs. “By elim-

works. It also does not include the elimination of the commercial building inspection fee required for new applicants or conditional use permit fees.

inating the business licensing fee, we want to send a clear message that Riverton is open for business.” Businesses will need to continue to be licensed by the city, but there will not be a cost associated with it. The proposal does not include businesses that serve or sell alcohol or sell fire-

“We’re excited to move in this direction,” said Councilman Sheldon Stewart. “By eliminating licensing fees for businesses, we are eliminating a barrier for them to conduct business in our city. For anyone considering opening a new business here in Salt Lake County, I’d encourage them to consider Riverton.” The change took effect on July 1, 2018, for both new business licenses and renewals.

Unmetered, Not Unlimited: Residents Encouraged to Cut Secondary Water Use By 25% Due to increasing drought conditions and excessive water use, Riverton City asked residents in July to cut secondary water use by 25%. This was a result of excessive secondary water use in the city; collectively consuming 30-34 million gallons of secondary water per day. Residents are encouraged to continue to voluntarily comply with that conservation request. Riverton is unique in that every residential address has secondary water access available for a flat monthly rate based on lot size; a cost-saving service that most cities cannot or do not provide. Secondary water is not metered in the city, which is the likely cause of excessive consumption. The system has been operating above recommended capacity, causing some variation in pressure in certain areas of the city. The system is designed and capable of accommodating all recommended water

needs from Riverton’s growing population but was not designed to accommodate excessive use from individual users. As the autumn season begins and temperatures begin to drop, outdoor plants will not need as much water as they have needed over the summer. Watering time and amount can be cut back. The Utah Division of Water Resources offers a watering guide that is customized by location and time of year to show how much water lawn will need. The guide can be accessed at conservewater.utah. gov. “People generally don’t know how much water they are actually using to keep their lawns green, said Scott

Hill, Riverton City’s water director. “It’s more than you might think and we need everyone to cut back in Riverton. Just because secondary water is unmetered doesn’t mean that there is an unlimited supply.” Riverton City has taken measures to cut back watering on the 473 acres of city parks and other green space and has been watering city parks, on average, about 25% less than the state-recommended amount.

School, 12476 S Silverwolf Way. “A group of school and city leaders met over the summer to discuss school safety and trends in schools,” said Mayor Trent Staggs. “Issues such as mental health and suicide prevention dominated that discussion. It was evident that the community needed to come together and have an open and honest discussion. Experts note that social media use is a large contributor to the current mental health trends in children, so this event is most fitting.” The event is meant for adults only, as the discussion will be open and honest and may not be fitting for children. Adults with children or

those who work with children are encouraged to attend.

The event is co-sponsored by River-

Get Into the River Festival Shout Children’s Choir Concert

BE IN THE KNOW! Subscribe to Riverton City’s e-newsletter and important email updates at:

Join Riverton City and the Unified Police Department for the annual Holiday Heroes FUNdraiser 5K and 1-Mile runs on November 3. This is a great event for the whole family. Santa will be present at the finish line! For details or to register, visit: 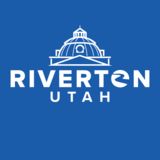