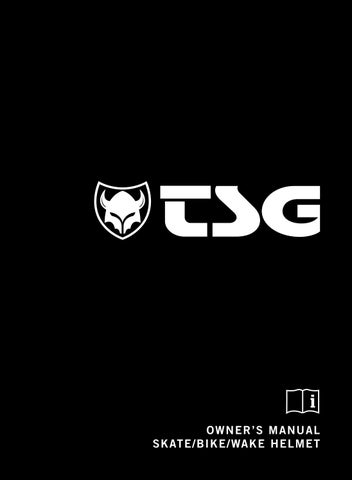 Thank you. You have chosen a TSG safety product designed especially for action sport athletes and urban bikers. Please read the following information carefully. Correctly used and cared for, it will keep you better protected and satisfied.

TSG helmets have been tested against the manufacturer’s specifications and EC Type-Examination certification has been issued by the test laboratory mentioned on page 2.

Until 20.04.2018: The helmets are CE marked to denote compliance with the EU Personal Protective Equipment Directive 89/686/EEC. From 21.04.2018: The helmets are CE marked to denote compliance with the Personal Protective Equipment Regulation (EU) 2016/425. One or more of the following European and North American Standards have been used in the evaluation of this product: - EN 1078. Helmets for pedal cyclists and for users of skateboards and roller skates - EN 1385. Helmets for canoeing and white water sports - GS (Geprüfte Sicherheit/Tested Safety) - CPSC: Standard safety requirements of the Consumer Product Safety Commission. Complies with CPSC Safety Standard for Bicycle Helmets for Adults and Children Age 5 and older. There must be a clearly visible marking on every approved helmet and this may not be removed. Find the official EU declaration of conformity for each model on our website: ridetsg.com.

Helmets conform to EN 1078: Helmet for pedal cyclists and for users of skateboards and roller skates. For use in non-motorized recreational sports only. Helmets conform to EN 1385: Helmets for canoeing and white water sports, such as wakeboarding and kitesurfing. They are not intended for use in white waters of classes 5 and 6, as defined by the International Union of Canoeing. ENGLISH – 5

This helmet should not be used by children while climbing or doing other activities when there is a risk of strangulation/hanging if the child gets trapped with the helmet. It is important that the helmet fits your head properly and that it is correctly buckled. While no helmet can prevent all head injuries, use of a helmet, taking lessons, riding responsibly and within your abilities, and common sense, can together significantly reduce the risk of catastrophic head injury and death. However, accidents, serious injuries or death can occur even if the helmet is properly used. TSG makes no claim that this helmet will eliminate all possibilities of injury. This helmet is designed to absorb shock by partial destruction of the energy absorbing liner. This damage may not be visible to the user. Therefore, if subjected to a severe impact or blow, the helmet should be destroyed and replaced even if it appears undamaged. A helmet can only provide a level of protection for areas that it covers. It does not protect your neck. Do not make any attachments to this helmet, other than those recommended by the manufacturer. Doing so voids all warranties and affect the helmetâ&#x20AC;&#x2122;s performance. The helmet may be damaged by paints, solvent, bleaches or strong detergents, sometimes invisibly. For use in non-motorized recreational sports such as pedal cycling, skateboarding and roller skating only.

Wipe only with a soft damp cloth in gentle soap or mild detergent in cold water, rinse by wiping with a soft cloth damped in cold water and dry with a soft cloth. Comfort padding can be removed and hand washed and air dried. Common substances applied to this product (solvent, cleaners, hair tonics, paint, adhesives etc.) can cause damage that may be invisible to the user and compromise the effectiveness/safety of your TSG helmet.

Do not expose your helmet to impact or external force during transport. Store it in a dry place away from any source of heat like a hot radiator or sunshine through a car window. If your helmet melts it is not covered by our warranty.

For maximum performance, your TSG product must be inspected prior to each use. Stop using the helmet if any components show signs of damage or are worn, cracked, and/or deformed, or if the inside foam has deteriorated. Helmets have a limited life span in use and should be replaced every three (3) years under normal use conditions, but at the latest after 5 years from date of manufacture (see product label). If you know or suspect that your helmet has been damaged or exposed to any abnormal force, return the 6 â&#x20AC;&#x201C; ENGLISH

To attain maximum protection and comfort, choose the correct helmet size. It should sit firmly without pressing or chafing. It is important that the helmet can neither ride up your forehead nor be pushed down over your eyes.

PLEASE CONSIDER THE FOLLOWING GUIDELINES FOR A PROPER FIT OF THE HELMET.

product to the seller for inspection or destroy and replace it. Please dispose of it in an environmentally-friendly manner. Do not make any modifications to the helmet, this includes the outer shell, the inner EPS liner or chin strap, any modifications will void all warranties and affect the helmet’s performance.

1. Put on the helmet in a manner so that it sits straight on your head and covers

your forehead, without blocking your vision. The helmet should fit comfortably; so that it holds onto your head as you move it front and back, as well as side-to-side.

2. The comfort pads inside the helmet should exert firm, even, but comfortable pressure against your head. The helmet fits well if the pads are in contact with all sides of your head around the helmets interior. A helmet that fits well also fits comfortably without being too tight. 3. When you are satisfied with the fit, tighten the chin strap so it fits snug and

make sure the buckle locks securely and that the straps do not slip. If your straps aren’t adjusted right, your helmet won’t stay on properly. The loose ends of the strap must loop back up through the rubber „0“ ring.

4. To adjust the position of the straps, hold one end of the chin buckle in one

hand and slide the adjuster up or down the strap as necessary, to create a balanced and even „Y“ shape underneath the ears. Position the buckle away from your jaw bone. It should not be possible to remove the helmet without opening the chin strap. If you can roll the helmet off in front or back, or roll it so it blocks your vision or exposes your forehead, it does not fit correctly and should be re-adjusted.

HOW TO CUSTOMIZE YOUR FIT

Our Tuned Fit System allows you to dial in your fit using different thickness comfort pads on the interior of the helmet. Your helmet comes with two sizes of comfort pads. Carefully separate the Velcro strips at room temperature to remove the pads on the inside of the helmet and swap them for the thickness you need. Your helmet package contains spare fastening points in case one of the Velcro fastening points becomes detached. If the helmet still does not fit after having adjusted it with the pads, choose another size. Comfort pads can be purchased separately in all the various sizes.

If you have purchased a TSG helmet with FlexTech Technology, you will note the inner shell of your helmet consists of several EPS foam segments which are connected with a strong nylon webbing tape. These individual segments are slightly adjustable and therefore adapt perfectly to your head shape. Our FlexTech Technology increases comfort, whilst completely fulfilling all legal norms regarding design and impact protection.

If you have purchased a TSG helmet with Dial-Fit System, you can size adjust your helmet by dial. To tighten the dial, turn it clockwise to a comfortable fit. To loosen, turn the dial counterclockwise. The fit should be snug, but not uncomfortably tight. Be sure to check the adjustment of your helmet before each ride. The Dial Fit System is designed to enhance the fit and stability of your helmet. It is not a replacement for your helmet’s straps. Do not attempt to remove the fit system from your helmet; doing so will void all of the helmet’s warranties.

If your helmet is equipped with MIPS® you profit from a unique technology developed to reduce brain injuries caused by rotational impacts to the head. Learn more about MIPS by reading the MIPS brochure enclosed in your helmet box or visit: http://mipsprotection.com.

If your helmet visor comes with side screws, open the screws on the visor, then move the visor into the desired position and close the screws thoroughly.

use a non-sharp screwdriver (between pin and visor) to carefully remove the pins at the ends of the visor and lift the visor away from the helmet. To replace the visor, center it on the helmet, position the middle pins (if provided) into the holes and then snap the pins on the side of the visor into the holes in the helmet (Fig. 1). Depending on the model your visor offers 3 degrees of vertical angle adjustment; simply tilt the visor up or down to the desired position (Fig. 2). Some models donâ&#x20AC;&#x2122;t feature adjustable visors. Caution: DO NOT try to remove the visor by pulling forward on the centre. This will damage the helmet and the visor.

of your helmet model. Our super light In-mold helmets use a thin in-mold PC shell. All helmets use a core of impact absorbing EPS. None of the materials used in the construction of the product are known to contain anything that might cause an allergic reaction or be dangerous to health.

TSG International AG warrants that this product is free of manufacturing defects in material and workmanship when it is delivered to our dealers. Unless otherwise stipulated by local law, this warranty is limited to one year from the date of purchase and is limited to the original purchaser. This warranty does not apply in the event of abuse, negligence, carelessness or modification, or if the product is used in any way other than is intended. Nor is any attempted repair or replacement with any part or accessory other than original TSG parts and products covered by the terms of this warranty. This warranty takes precedence over any other agreements or warranties, general or special, expresses or implied and no representative or person is authorized to assume liability on behalf of TSG in connection with the sale or use of this product. TSG makes no other expressed warrantees, except as otherwise specifically stated. TSG waives all responsibility for any third party for consequences that might result from the use or handling of any TSG product by any legal or natural person.

HOW TO MAKE A WARRANTY CLAIM

If your TSG helmet is found to be defective in materials or workmanship TSG warrants your helmet for one year from the date of purchase and we will, at our sole option, either repair or replace your helmet free of charge. Just take your helmet to the dealer from which it was purchased, with a letter indicating the specific reason youâ&#x20AC;&#x2122;re returning the helmet, and proof of purchase. The dealer will then evaluate the claim.

WORLDWIDE: TO FIND A CURRENT DISTRIBUTOR IN YOUR COUNTRY, PLEASE VISIT US ONLINE AT RIDETSG.COM 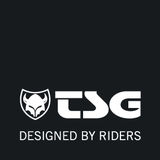