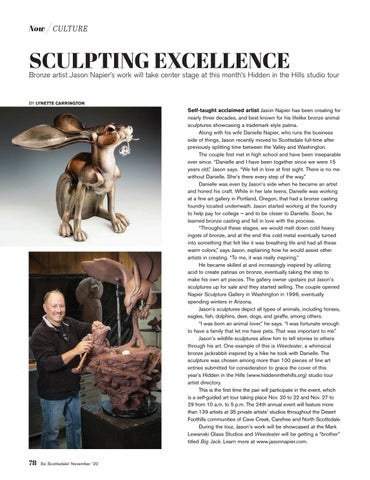 Self-taught acclaimed artist Jason Napier has been creating for nearly three decades, and best known for his lifelike bronze animal sculptures showcasing a trademark style patina. Along with his wife Danielle Napier, who runs the business side of things, Jason recently moved to Scottsdale full-time after previously splitting time between the Valley and Washington. The couple first met in high school and have been inseparable ever since. “Danielle and I have been together since we were 15 years old,” Jason says. “We fell in love at first sight. There is no me without Danielle. She’s there every step of the way.” Danielle was even by Jason’s side when he became an artist and honed his craft. While in her late teens, Danielle was working at a fine art gallery in Portland, Oregon, that had a bronze casting foundry located underneath. Jason started working at the foundry to help pay for college – and to be closer to Danielle. Soon, he learned bronze casting and fell in love with the process. “Throughout these stages, we would melt down cold heavy ingots of bronze, and at the end this cold metal eventually turned into something that felt like it was breathing life and had all these warm colors,” says Jason, explaining how he would assist other artists in creating. “To me, it was really inspiring.” He became skilled at and increasingly inspired by utilizing acid to create patinas on bronze, eventually taking the step to make his own art pieces. The gallery owner upstairs put Jason’s sculptures up for sale and they started selling. The couple opened Napier Sculpture Gallery in Washington in 1996, eventually spending winters in Arizona. Jason’s sculptures depict all types of animals, including horses, eagles, fish, dolphins, deer, dogs, and giraffe, among others. “I was born an animal lover,” he says. “I was fortunate enough to have a family that let me have pets. That was important to me.” Jason’s wildlife sculptures allow him to tell stories to others through his art. One example of this is Weedeater, a whimsical bronze jackrabbit inspired by a hike he took with Danielle. The sculpture was chosen among more than 100 pieces of fine art entries submitted for consideration to grace the cover of this year’s Hidden in the Hills (www.hiddeninthehills.org) studio tour artist directory. This is the first time the pair will participate in the event, which is a self-guided art tour taking place Nov. 20 to 22 and Nov. 27 to 29 from 10 a.m. to 5 p.m. The 24th annual event will feature more than 139 artists at 35 private artists’ studios throughout the Desert Foothills communities of Cave Creek, Carefree and North Scottsdale. During the tour, Jason’s work will be showcased at the Mark Lewanski Glass Studios and Weedeater will be getting a “brother” titled Big Jack. Learn more at www.jasonnapier.com.