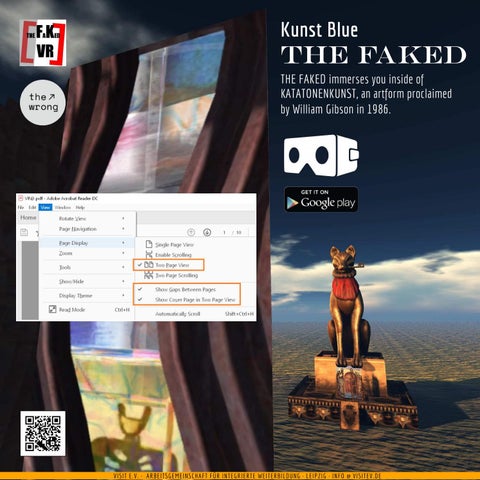 THE FAKED immerses you inside of KATATONENKUNST, an artform proclaimed by William Gibson in 1986.

“What you do when you sit in a canoe with headlights on and you are stuck in a tree?”

My body snapping back, my head turning in disbelief. Are they serious asking me such nonsense? I have a Ph.D. in neuroscience. I was expecting an interview and that my application would be treated seriously. I deserve better than a wicked Voight-Kampff test. I said, “Conclusion?” and pointed to the Director of Finance and said, “False,” then to the Head of HR, “True.”

This way the short story TUA CULPA by Substance-D begins.

dimensional world to grip the canoe with headlights on when stuck in a tree. However, with THE FAKED VR you can leave the flat world behind and sneak into a world made by artists of a new kind. Sadly, in THE FAKED VR you are only a visitor, not a creator, not a builder, not a coder. We say you are a user.

The life of a user is hard. The Gods of Informatics keep the users on a short leash. The time will come when everyone will extend the now,

which is called the real world, to reach out beyond a world facing global warming, to reach out all the way to the rift horizon. In fact, the time has already come when you can create such worlds by yourself.

THE FAKED VR, for the first time presented at the Grand Opening of the wrong Biennale 2019/2020, brings a world of Art to Unity (which was made in opensimulator) and is shown in Google Cardboard.

All you need is a good smartphone and a Google Cardboard compatible headset. You download the app, install it on your Android and up you

go. There is no access to any of your data stored on your smartphone. THE FAKED VR stands on its own. The use is safe. But keep in mind that every Head Mounted Display brings you outside the normal visual field you are in now -- like when reading this text. THE FAKED VR is a

simulated world. You may get dizzy and loose orientation. So please sit on a chair when using the app. Best to sit on a swivel chair so you can

easily turn your body around when exploring the world you enter. Ask a friend to stand close by you, to prevent you from slipping off the chair. Most importantly, read the instructions that come with the Head Mounted Display. WHAT YOU WILL MISS

THE FAKED VR comes as a single user experience. You, wearing the headset, stroll around alone. It is merely a demonstration of a different

world, the world of immersive interactive art. The world from where the artworks have been taken is a virtual grid world, a world populated by avatars, in other words a social environment. This environment spans the internet and is a Hypergrid network through which thousands of servers are connected. THE FAKED VR has its origin in Craft World and homes in Metropolis grid and Francogrid.

THE FAKED VR THE FAKED being part of THE WRONG

About THE FAKED VR experience: First time an App for Google Cardboard [THE FAKED VR]

created an immersive VR world contribution to the biggest art show in the world, THE

opens the door to an art world created in opensimulator. A team of international artists

WRONG Biennale. Google Cardboard viewer sells for less than 10 Dollars. For THE FAKED VR App you need a smartphone running on Android.

passport issued by NSK, the New Slovenian Kunst movement, well known by its front group Laibach. Laibach has rebirthed itself a few times since its foundation, the last time was at

the Venice Biennale 2017, proclaiming the stateless state of Kunst. Kunst became the new term of art that differs from the traditional agenda. One of the visionaries of the digital

age, William Gibson, created in his novel Count Zero, which led to the genre Cyberpunk, a sensorial art that can be touched outside the real world but is nevertheless linked to it.

The name of this art form: KATATONENKUNST. It is described by Gibson as "stabbed art"

where pinches, holes and bio-sensors bring you into the virtual world of Katatonenkunst before you realize that you are already inside it.

Following the mission of NSK of a constant change in the change, THE FAKED embassy

hosts various artworks and presents them in different layers, such as: on open water in a sailboat, in the air via drones, underground in a bunker, in VR through Google Cardboard,

directions. The most interesting one is THE FAKED VR which uses THE WRONG ROUTER. This router, smaller than a smartphone, can be operated any place on earth and beyond,

even on the moon. All you need is a download of the App on a smartphone and a Google Cardboard or a compatible headset like OCULAR BLUE. THIS IS AN EXCERPT OF THE CATALOGUE

pre-published for THE FAKED in thewrong by Kunst Blue

THE TEMPLE OF KITSUNE

The art world that was selected by Kunst Blue for being presented in THE FAKED VR App is THE TEMPLE OF KITSUNE. The first edition of this App shows: KITSUNE - a giant fox created by the Japanese artist Ayuki.

TUVALU - a message on Global Warming by Kunst Red [USA].

PLAN 9 - a needle ship that travels in the Mercatoria hypergrid created by Exy Atreides [England].

THE ASL ROBOT - a noob signing in a unknown language by Art Eames [Germany] who did the scripting in opensimulator.

ART BLUE - a blue and a red alien sculpture made by Venus Adored symbolizing the visitors of the installation. It outlines also educational aspects for art students, art teachers and persons curating digital art.

The art world was arranged by Juliette Surreal-D, who worked as co-curator in 1Biennale 2018.

WORLD IN WORLD EXPERIENCE The Temple of Kitsune is hidden in a world, a box, a matrix, a VR room. Call it as it fits for you best. When you log in, when you take the Cardboard app, then you are in this box, but you don't know there is a world outside. You don't know that there is something from

outside looking at you. When you completed the quest then you will teleport there, to the outer world, and see that three long legged maskitts have been watching all the time to

protect the world you have been inside. Then you will understand the cryptic message of the Cloud Atlas and the needle ship PLAN 9.

ABOUT THE TECHNOLOGY The App was programmed in the lab of Kunst Blue by Georg, a 21-year old coder, recently finishing his Bachelor in AI at the University of Malta. Georg is known in the world of

gaming by the name HERZSTEIN. The original art world was converted from opensimulator [OAR] to unity and then implemented in a unity Google Cardboard App.

The App THE FAKED VR gives an idea about the world that exists in opensimulator. It

provides about 30 % of the experience. There are various reasons why not more. One is

the different light models between opensimulaor and unity. Another is the simulation of water and shadows. The resolution between a LCD screen [4K] and the one of a

smartphone differs. As long as the lens systems in a Google Cardboard is quite bad the

experience will always fade. Nevertheless there are some millions of such Cardboard VR boxes sold so it is good for a popular start into this stunning form of an art experience. The target right now is that at a final stage 50 % of the original art world of opensimulator can be simulated in a reasonable way.

99/4 home computer, called it MONDRIAN. Every user could become an artist by changing parameters to create layers of moving rectangles with sound patterns. This was in 1979.

Now 40 years later recoded objects of H.W. Franke's MONDRIAN emanate like metals rods in an orbital bombardment into the brain of the user giving art new depth, reclaiming art itself as a user created reality. Katatonenkunst is digital born art. Will we head to a Gesamtkunstwerk that creates digital life?

MEET THE LONG LEGGED MASKITT IN VR AND AS A BRONZE STATUE After having solved a quest you will teleport outside the simulated world and meet the Long Legged Maskitt.

Bryn Oh created the Long-Legged Maskitt, a fine art bronze statue, that was handed over as an Award for outstanding Immersive Interactive Art at the 4th edition of the Santorini Biennale IMMERSIVIA in late 2018.

Bryn Oh about the Long-Legged Maskitt [from 1Biennale catalogue]:

â&#x20AC;&#x153;Essentially, the idea is that at our stage in development, we seem to be able to do amazing technological and genetic things but in some ways, we release these technologies faster than we control them.

tall and walks the polluted environments of the world where my narratives take place. They

filter and feed on the polluted air through its gas mask mouth. Walking industrial cities and clean-up sites while slowly purifying."

THE FAKED immerses you inside of KATATONENKUNST, an artform proclaimed by William Gibson in 1986.

GET THE BOOK FOR THE APP 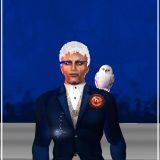 THE FAKED presenting in THE WORNG Biennale in a VR Google Cardboard app an art installation made in immersive interactive worlds. It will be...

THE FAKED presenting in THE WORNG Biennale in a VR Google Cardboard app an art installation made in immersive interactive worlds. It will be...