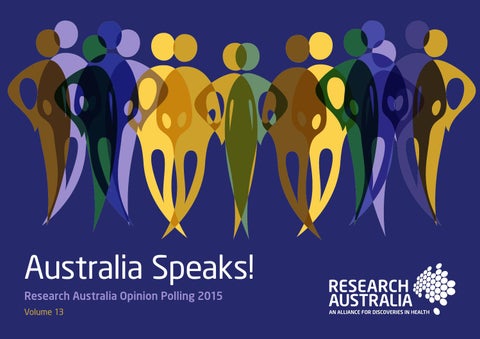 A Message from Research Australia’s Leadership

As Research Australia celebrates its 15th anniversary we are pleased to provide you with our 13th public opinion poll, charting the attitudes of Australians to health and medical research since 2003.

Once again the report reflects the high value Australians place on health and medical research and their strong support for continued government funding. This attitude extends to science more generally:

• 90% of respondents want a higher priority on the teaching of science, technology, engineering and mathematics • 91% support government funding for basic scientific research • 93% expect politicians and public servants to listen to scientists when it comes to decisions about Australia’s future. This is encouraging news at a time when there is a renewed emphasis on the need for Australia to be more innovative and to look to knowledge intensive industries for our future. The Medical Research Future Fund (MRFF) is a key component of this future. A strong supporter of the MRFF, Research Australia is heartened by the poll’s finding of a high level of support for the MRFF in the wider community.

These topics and many others are covered in more detail in the following pages. We hope that you fund this report insightful and informative.

It was also supported by funding from the Australian Government under the Health System Capacity Development Fund and from the Ingham Institute.

Having policies and programs for the aged and ageing, including for pensioners and self-funded retirees

27 priorities for Australian Government spending in the next two to three years were shown to repondents. The above scores reflect the proportion of respondents who rated each priority 7 or above out of a ranking of zero (‘not important’) to 10 (‘extremely important’)

Improving hospitals and the health system ranked No.1 over the last decade

From time to time we add or remove some priorities from the list of priorities, to reflect current issues and concerns. In 2015 we included ‘Addressing Domestic and Family Violence’. It was rated 11th out of 27, with a score of 75%. Alcohol abuse, drug addiction and mental illness are all contributors to domestic and family violence, and research into these areas has a role to play in addressing it. 3

Support for the MRFF

of Australians support the MRFF

Support is strongest among those aged over 65, with 85% in favour of the MRFF.

Strong support for science It is clear from the response to a series of questions we asked that Australians value science and the role it can play in national decision-making.

Working in collaboration with researchers around the world on major problems

Research can reduce health costs Australians are confident that health and medical research can provide solutions that reduce the cost of health care. Research Australia shares this view. Using research to improve healthcare can result in earlier diagnoses, quicker and more complete recoveries, shorter hospital stays and fewer readmissions. Research can also help keep people out of hospital in the first place. All these actions can reduce the pressure on our health system and help keep total costs down.

Australiansâ&#x20AC;&#x2122; motivation to share their health information To advance medical research 77% So health care providers can improve patient care 63% So public health officials can better track disease and disability and the causes 56% Not sure 7% 8

When Research!America asked the same question in the USA, a much greater percentage of Americans surveyed were unwilling to share their personal health information for any reason than their Australian counterparts.

58% would definitely or probably participate in a clinical trial if asked to do so.

65% of people aged 65 or over would agree to participate.

Willing to participate in a clinical trial

For the unsure or for whom ‘it depends’, The two most important considerations were: • what their other treatment options were; and • how sick they were. 9

Should we tax sugary soft drinks? Currently alcohol and tobacco are taxed, in part, to reduce consumption and therefore reduce the impact on individuals’ health and the cost of poor health to the community. Australians are facing increasing threats from preventable chronic diseases like type 2 diabetes which are linked to obesity. Will a shift in attitudes towards sugar become similar to the movement against tobacco in the 1960s? Mexico introduced a 10% tax on sugar-sweetened drinks in January 2014 and sugary drink consumption has fallen by as much as 12% (1). Research Australia wondered whether there would be support in the Australian community for a similar tax on soft drinks with high levels of sugar. (1. http://uncfoodresearchprogram.web.unc.edu/822/)

Value of donations from regular donors 80% 70%

While 66% of people who donate at least annually give less than $100 in the last year, since 2008 there has been a noticeable trend up in the percentage of people donating between $101 – 500 per year (from 14% to 27%) and a corresponding decrease in the number of people donating less than $100. Only 1% give $500 or more. Donation intentions stable • Three quarters expect to donate about the same amount • Only 10% expect to donate more than they have in the last year 11

How do we use the internet for our health? ‘Dr Google’ has become a well know expression, but how prevalent is the use of the internet for health information, and in what ways are Australians using it? Research Australia asked a series of questions to explore how the internet is being used by people in relation to their health and illness.

Which websites are used / helpful?

Health organisations like a cancer council or heart foundation

in the last 12 months to obtain information about a health problem for themselves, a friend or a family member.

Before or after seeing a doctor?

Refer to scientific papers and journals

Of the 90% who reported having been unwell at some point in the last 12 months: • 58% used the internet to check their symptoms BEFORE seeing a doctor; while 46% consulted a friend or family member first. • 71% used the internet to seek information AFTER a consultation with a doctor, to learn more about what their doctor told them. 12

The article offers treatments, courses or programs for sale

Quotes from people who are described as doctors or scientists

The article refers to scientific papers and journals

The article recommends you check with your doctor first

How important do you think it is that politicians and public servants at all levels of government listen to advice from scientists?

It has been suggested that the Federal Government assign a higher priority to improving education focused on science, technology, engineering and mathematics than it currently does. Do you…. Strongly agree, Somewhat agree, Somewhat disagree, Strongly disagree, Unsure? Do you agree or disagree with the following statement? ‘Even if it brings no immediate benefits, basic scientific research that advances the frontiers of knowledge should be supported by the Federal Government.”

Health and medical research can reduce costs When it comes to rising healthcare costs, do you think that research to improve health is part of the problem because it will increase costs or part of the solution as it will help reduce costs?

The internet and health information

For which of the following reasons would you be willing to share your personal health information, such as the results of diagnostic tests, or the outcome of treatments administered? (choose all that apply)

In the last 12 months have you used the internet to obtain information about a health problem for yourself, a family member or friend?

Tax on soft drinks The Australian Government currently imposes high taxes on products such as tobacco and alcohol, partly to reduce consumption and the damaging health effects and costs. Do you support a tax on soft drinks with high levels of sugar?

This research was conducted to trend attitudes towards medical and health issues in Australia.

Reason for Difference in Proposed to Actual Sample Size:

No difference in proposed to actual sample size.

Members of Roy Morgan Research’s Proprietary Online Panel, 18 years and older, living in Australia, were emailed an invitation to participate in the survey.

Weighted proportional to population by age, sex and area, and projected to Australian 18+ population estimates

Representatively of the Sample Population:

Sample is broadly representative of Australia’s population by sex, age and area

Greater investment in health and medical research from all sources

Research Australia’s mission is to make health and medical research a higher priority for the nation, and we have four goals that support this mission.

Ensure Australia captures the benefits of health and medical research

Copyright This work including without limitation all information text, graphs, names and logos is protected by copyright. This work may be used for your own personal use, information, research or study, or in a public forum solely for the promotion of the importance and benefits of health and medical research, so long as the work is attributed to Research Australia and used in a strictly not-for-profit capacity. Reproduction by bona fide newspapers, journals and similar publications is also permitted by Research Australia subject to attribution of Research Australia in any reproduction. Neither this work nor any part of it may be reproduced, stored, on sale, redistributed or otherwise used for profit. The report is available on the Research Australia website at www.researchaustralia.org 19

AN ALLIANCE FOR DISCOVERIES IN HEALTH 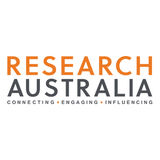