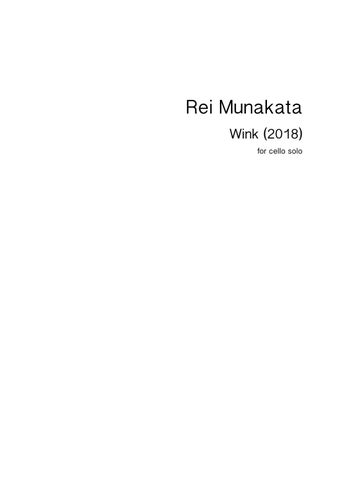 Program Note Time passes endlessly, and it is getting faster. Any colour, whether it is white, red, or light brown, would fade away over certain length of time, but its brilliantness vividly remains. Dazzling beams of light absorbed from thousands of cheering audience, the production team, the stage crew, the marketing enterprise, the advertisement agency, the media, and everything around the world become one single ball of energy and brilliantly reflect the one who is standing on the stage, alone. A blink of time, extremely concentrated.

Performance Notes In general, Wink (2018) for cello solo should be performed with great sense of sophistication in character. By default, all sound/noise effects should be carefully articulated without being overly violent (except fff in page 6) or pretentiously theatrical. Move quietly, swiftly and elegantly with determination. Gather energy from everything around you and explode with purpose and clarity.

Unusual accidentals 1/4 sharp, 3/4 sharp, 1/4 flat, 3/4 flat ¨Slightly¨ higher and lower. A sense of ¨out of tune¨ or ¨did not reach the desired pitch¨. Adjust the actual intonation according to the performer’s interpretation, ad lib.

Gradual bending over repeated phrase. The whole phrase gradually becomes lower in pitch as if the brightness of the pitch slowly ¨fades away¨ over time. The natural sign, in this case, indicates the original intonation of the phrase as default before the bending starts, and does not refer to any particular tone.

Tapping Tap the cello resonance body with two fingers. Find a spot on the wooden frame of the cello that is safe to tap. Percussive and effective but without being violent (do not force!). Aim for clean and focused tapping noise with a good resonance. Always ritmico with a sense of strong groove and rhythmical precision.

Tap the floor with the right foot. Percussive and effective but without being violent (do not force!). Aim for clean and focused tapping noise. The foot tapping should not overpower everything else going on at the same time.

Stem without cross notehead = Mime floor tapping without actually hitting the floor. Silence. Stem with cross notehead = Actually tapping the floor with noise. The example shows a gradual transition from silent miming to actual tapping. Always ritmico with a sense of strong groove and rhythmical precision.

Move the bow in circular motion. Medium size (ca. diameter 20 - 25 cm) circle, flautando, gentle, and relaxed (rather slow but not ¨slow-motion¨) speed as default. Peaceful, quiet, and meditative with only white noise without a sense of pitch.

Circular bowing with irregular and expressive gestures. Change the speed and bow pressure to achieve colourful variations. Bring out a variety of overtones/noise with a strong sense of sudden and suggestive gestures. Occasionally bring out a sense of pitches. The thickness of the circle lines suggest an example of bow speed and pressure. But feel free to interpret in a similar manner.

The same as above (circular bowing on double harmonic tones) , but switch back and forth between the upper staff (double harmonic tones with irregular glissando) and the lower staff (in tenor clef, fragments of a ¨melody¨). When switching to the lower staff, slow down the bow and take more time (slightly more horizontal) in order to bring out the pitches. But keep it abstract and let the fragments ¨come and go¨ from the cloud of white noise.

¨Double Damping¨ ¨Double damping¨: Lightly place the l.h. thumb on the D and G strings where indicated with the diamond notehead (harmonics). Place the bow right below the l.h. thumb. The thumb nearly or partly touching the bow. Place l.h. 2 and 3 fingers to damp the same strings, indicated with the damping sign, on the other side of the bow (nearly or partly touching the bow). Thus, the bow is in-between the left hand fingers (See diagram). Damp well with l.h. and keep the bow light (flautando) in order to create high frequency white noise without any pitch or squeaking noise as default. When the dynamics change and the music develops, change the bow pressure and speed in order to create a colourful and complex noise world with or without pitch and squeaking (but always damped well with the left hand).

Dotted lines = Graphical notation of ¨Release/Replace¨ of the fingers. Release and replace the fingers from the strings. (Release when the line ends and replace when the line starts again). Notice that the movements of l.h. 2&amp;3 and the thumb are independent from each other. The timing and rhythm of this action should be determined by the performer based on the graphical notation. Sometimes it becomes open strings (no l.h. fingers are touching the strings). Include the open strings occasionally, but not all the time. The finger movement should be mechanical, vigorous, and percussive in order to achieve sudden changes of noise colour as if changing ¨room acoustics¨.

Whispering All whisperings should be mostly with air but with a faint hint of the voice. Sweet and ¨husky¨ voice from ¨the past¨. Distant and fragile. All syllables are written in Japanese Romaji (Romanisation of Japanese using Latin script), and English is the most closest European language in terms of pronunciation. The whispering should be well balanced with the cello playing throughout the piece. Stay natural without being over-theatrical.

dolce and airy with a sense of transparency. Melt away when ¨e—n¨ with a slight snake-shape bending as shown in the score..

Carefully articulate each syllable. Clear and precise but still sweet and husky. Consonants should be round without accents.

Whisper numbers as quickly as possible in any language, but preferably in Japanese. Breathless and hurried. You aim to say a number between 8000 and 9999, but sometimes there is no time to finish. Exact number not important. ad lib.

It means ¨point¨ in Japanese. Optionally translate when counting in another language.

Insert the following information (improvise): OO = name of a prefecture △△ = name of a city

□ □ = name of a person. One can either prepare all the names before the performance or improvise at the spot ad lib. It does not have to be a real person or a place as long as it is different every time. Breathless and hurried. Do not breathe until the inhaling sign (i.e. the length of the passage is determined by how long the breathe lasts).

Two forms of rejection in Japanese. ¨…..re na-i¨ = ¨cannot¨, and ¨…. ra na-i¨ = ¨will not¨ or ¨do not¨. As if he or she is strongly determined to something , and the energy of the determination will always remain gently and faintly in the air like perfume forever.

Noise of a peck in the air (air kiss). Simple and gentle without being over-theatrical. ¨f¨ is an action dynamic. Dramatic but tender and not violent.

Instrumentation: Cello Please ask the composer for the performance materials and information. www.reimunakata.net