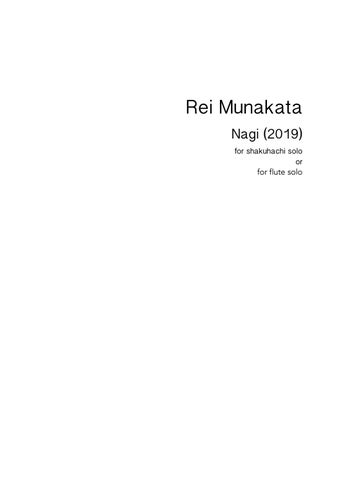 Rei Munakata Nagi (2019) for shakuhachi solo or for flute solo

Introduction Nagi (2019) for shakuhachi solo is commissioned by Daegu Contemporary Music Festival 2019 in South Korea. The piece is originally composed for Shakuhachi, but can be played on the Western concert flute. First performance: Teruhisa Fukuda on shakuhachi, June 28th 2019, Daegu Concert House in Daegu, South Korea

Performance Notes Nagi (2019) should be performed with a great sense of concentration and sophistication in character. By default, all sound/noise effects should be produced at ease without being overly violent (except during fff loud passages) or pretentiously theatrical. Relax and enjoy the hot breeze in the summer.

Dirty air noise Notated graphically with many small and short diagonal lines around the main wavy vibrato line. Choose different techniques (ex. ¨Muraiki¨ in Shakuhachi technique) to achieve a dirty sounding air tone/noise with complex air colour and harmonic partials. Rough and dramatic. Inhale Notated with an arrow pointing upward. Inhale the air near the mouthpiece of the instrument. Experiment with different angles of the embouchure to achieve the loudest inhaling noise possible.

Embouchure The angle of the air-stream is indicated with bold and big accidental signs above the 5-line staff.

Change the angle of the air-stream (ex. by tilting the chin inward) to lower the pitch of a note/phrase.

Change the angle of the air-stream (ex. by tilting the chin outward) to higher the pitch of a note/phrase.

Continuously change the angle of the airstream in circular motion to change the pitch of a note/phrase up and down. The visual aspect of the physical movement is also an important factor. Move very slowly with a sense of friction.

Embouchure vs vibrato Similar to the embouchure angle, the vibrato technique also influences the pitch. But the purpose of vibrato is to colour different kinds of expression and musical timbre. The vibrato is notated graphically with different sizes and thickness of a wave line, and the performer is free to interpret the graphics to decide which kind of vibrato techniques to be used.

The example shows a gesture consisting of both the embouchure-change and the vibrato. The general shape of the phrase should follow the embouchure-change: Glissando up (¨+¨ to ¨#¨). Within the frame, add a passionate vibrato (with pitch bending if necessary) to colour the expression of the music. In addition, add a light ¨muraiki¨(indicated with many short diagonal lines) to add dirty air noise.

Page 4, 3rd line - the end of Page 5: The performer follows two systems with independent musical materials that interrupt each other. The upper line Quarter note = 60 when rhythm is indicated. The tempo stays constant throughout the section. The lower line Quarter note = 80, slowly and gradually make ritardando until quarter note = 30 in the end of page 5. The emboushure angle changes slowly and gradually from # to bbb in the end of page 5. The lower line consists of an ostinato figure that is repeated (but always poco a poco rit. and very slow glissando down). Repeat until the comma and immediately start to follow the upper system without any break. When the given musical figure in the upper system is complete, immediately go back to the ostinato in the lower system. Keep track the tempo and the embouchure angle of the ostinato in the lower system in order to achieve a sense of one long ritardando and glissando throughout the whole section.

Instrumentation: shakuhachi or flute solo Please ask the composer for the performance materials and information. www.reimunakate.net