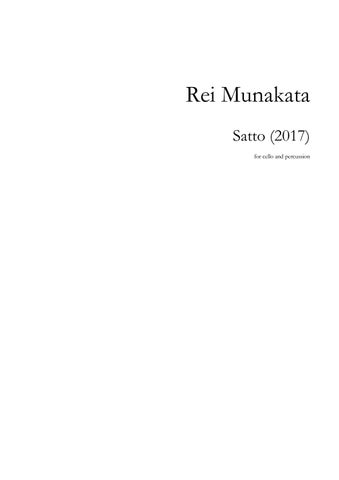 Acoustics and amplification The acoustics of the performance venue is an essential element to consider when performing Satto as the default nuances and dynamics of this work are quiet and dry. The ideal situation is a performance in a very small and intimate venue with no amplification. The acoustic should be small and dry that the performers can feel that any small scraping can be clearly audible. In a larger concert venue, amplification is recommended for each instruments, objects, and voices.

Introduction “Satto (2017) for cello and percussion” is a part of Project SPEED, supported by Swedish Arts Grants Committee (Konstnärsnamnden). I visited Kiruna in February 2013, and was particularly inspired by the extreme slowness of life in Norrland. I see a person walking towards me on the same street. He walks and walks for a very long time to surpass me and takes very long time to disappear – approximately 30 minutes in total. Absolutely nothing is happening otherwise. Even the faint sunlight seems to take longer time to reach my skin. The sense of slowness and calmness together with focused and minimalistic life event under the faint light and coldness created a sense of strong concentration and tension I have never felt in my life. There is a strong sense of energy hiding behind the calmness as if it is so secretive that you just simply have to find out. Perhaps from the feeling of loneliness? Or the intense silence throughout the city? Why is the slowness gave me such a strong impact? I became interested in how different types of speed can influence one’s expression and musical output. Speed in physics and gravitational force: A finger lands on the drumhead membrane and there is a noise. The musical expression or depth of the destined tone/noise is carefully crafted by the performer’s speed of finger/hand/arm movement with a sense of gravitational force. The gravity is the core element of the universe that creates infinite possibility of speed and velocity. As a metaphor, the drumheads, the nut, low register, and the floor are like a surface of a planet or a black hole with various gravitational forces. The instruments and objects are attracting the fingers, hands, and arms of the performer to land on them, and bounce off into the air in various ways. Concorde and sonic boom: When Concorde, British-French turbojet supersonic aircraft operated until 2003, flied faster than the speed of sound, the air pressure waves are forcefully compressed together and bounce back with enormous amounts of sound energy like an explosion called sonic boom. Project SPEED consists of several chamber music works based on speed as the main compositional element. “Satto” explores the possibility of acceleration due to gravity and the effect of supersonic travel.

Performance Notes General Notes All glissandi are continuous without staying on given pitches. Gravity In principle, all components and musical lines in “Satto” should be phrased and directed downward throughout the piece as if the music is forcefully attracted towards the earth. “Satto” is based on four different speed curves as the core musical material as following: Speed curves and glissandi Falling (negative exponential)

Start falling very fast but the speed decreases and land smoothly without any explosive accent. Carefully touch the ground without making any sound like a catwalk.

Start falling slowly and the speed increases. Great explosive accent should be emphasized when a falling object hits the ground very hard.

Start lifting up slowly and the speed accelerates. Quickly swipe off at the end.

After a shock of accent, bounce back very quickly, and the speed decreases. From suddenly taking off to floating in the air like slow motion at the end.

Fermata and “senza misura” The spatial awareness and the concept of time interval are the keys to “Satto”. The velocity of the musical stream and the sense of concentration during particular time duration must consist the sense of “searching” for the refined choice of moment. This careful awareness of fragile musical timings should be determined by the performers’ musicality, personality, and interpretation according to the environment and the feeling of the moment. Take time and be patient – do not hurry! Let the moment happen naturally by allowing yourself to be carried away in the stream of sound and silence. Choreography “Satto” is NOT a theatrical work, and the performers should not act like an actor. However every physical movement, even during silence, should be planned carefully throughout the piece. Just like the butterfly effect in chaos theory, all actions required in order to perform “Satto” should be dependent with each other and strongly connected with the speed curves explained above. In general, take as much time as possible with a sense of Japanese Noh theatre like calmness and concentration. Slow motion whenever possible in the following examples: - When you prepare a gesture or a phrase. - When you raise your bow or mallet. - When switching from one instrument to the other, from one technique to the other, and from one direction to the other. - When you turn the page. - When you walk to the stage and sit down.

Cello Bowing [Bow speed] Bow speed is an important element of the cello part in Satto, and in general, colourful variety of different bow speed and velocity should be experimented during the entire work. During glissando passages, follow the “Speed curves and glissandi” for the bow speed.

[Vertical bowing] Move the bow vertically along the strings without any horizontal movement (Ossia: Add a little horizontal movement if needed for your interpretation). Always brushing like flautando without too much bow pressure and pitches otherwise indicated. It is not specified which string(s) to brush in order to let the interpreter chooses spontaneously. Keep changing the string(s) according to the gesture, feeling, and situation. Vertical bowing with extra bow pressure: Over pressured bow with squeaking and scratchy noise with a lot of overtones.

Whispering and Speaking [Whisper] While constantly pronouncing “h”, change the mouth shape from “o” to “a” exponentially. Clearly articulate the pronunciation in the beginning with a strong accent, and exponentially disappear in the air. [Growl] Let the vocal cord growl from enthusiastic over-pressured air.

[Speak] Add voice to the whispering phrases from before.

Water Pouring and Sipping Preparation before the performance: • Fill the teapot with tea or water. Preferably a hot tea, but cold water can be used as substitute for less complication. (Listed as “water” in the score). • Put a little bit of tea or water in the teacup. Example of teapot and teacup: Teapot (Japanese kyusu)

Percussion [Knife on metal plate] Any small sharp knife that can create resonant sound effect when scraped against a metallic object such as metal plate or knife sharpener (whatever that makes a bright and resonant hissing sound). Scrape the knife against the surface of a metal plate or an equivalent as if an object takes off. Lower line = Towards the performer with louder dynamics. Higher line = Away from the performer with quieter dynamics. Let the knife rapidly leave the surface towards the end to achieve the metallic resonance.

[Small drum] Any small drum with stand (ex. snare drum) with very rough textual skin. Scrape the rough surface of the small drum skin with finger(s). Follow the speed curve for the amount of speed acceleration and decay. Lower line = towards the performer with louder dynamics. Higher line = away from the performer with quieter dynamics. Dotted line = finger(s) on the surface but not moving or barely moving (total silent or almost silent). Flautando. Continuous line = scrape. The thickness is a graphic illustration of gradual changes of scraping pressure and dynamics. With or without comma: When the speed curves downward with cresc., the end of the phrase is marked with or without a comma. The performer, together with the cellist, decides when to let the finger(s) off the surface or remain. Retake: When retaking a new speed curve, do not hit the instrument.

[Ocean drum] Small (8 inches) ocean drum placed on the low tom throughout the performance. Ordinary filled notehead = Tap or strike with finger(s) according to the dynamics. Cross “x” notehead = Poke the ocean drum from the side and let it rattle a little. It should sound almost unintentional. In a series of poking passage, keep changing the direction of poking in order to control a good position of the ocean drum.

[Low tom] Rather large low floor tom with legs. The ocean drum should be placed on top of the low tom throughout the performance.

[Kick drum] Small drum-set bass drum with kick pedal. Damp the drum heavily until there is no resonance at all.

Scrape the rough surface of the small drum skin with finger(s). Follow the speed curve for the amount of speed acceleration and decay. Lower line = towards the performer with louder dynamics. Higher line = away from the performer with quieter dynamics. Dotted line = finger(s) on the surface but not moving or barely moving (total silent or almost silent). Often flautando. Continuous line = scrape. The thickness is a graphic illustration of gradual changes of scraping pressure and dynamics. Small diagonal lines = over pressured. Let different scratchy overtones to come out. Dig in and take time.

[Gravel] in the pot Small and round gravels of different sizes, approximately between 2 mm to 7 mm. Wash before the performance if dirty.

Rather large flower pot or similar. Insert a lot of gravels in the pot before the performance. Avoid pot made of metal material.

[Gravel] to throw on bass drum Put aside enough gravel in a container before the performance. Grab some gravel and throw on the bass drum surface. The aim is to: 1) achieve the violent hitting noise, 2) let some gravel bounce off and hit the floor, 3) let some gravel to stay on the drum even after the initial bouncing. Let the gravel stay there for the rest of the performance. Let the gravel jump up and down to rattle when playing the bass drum in the last section. Experiment with different amount of gravel to throw in order to achieve the best result of rattling effect towards the end.

[7 coins] Any coin with medium weight and size from any currency. Drop a coin on one of the bongo drums of your choice without being theatrical. It does not matter whether the coin stays on the surface of the bongo drum or fall off and hit the floor.

[12 Porcelain plates] Very small, thin, and fragile porcelain plates. Preferably high quality plates that would dismantle clean and crispy when dropped. Drop a porcelain plate (p. plate) on a floor made of stone, marble, or similar.

Whispering and Speaking [Whisper] While constantly pronouncing “sh”, change the mouth shape from “i” to “u” exponentially with a sense of strong gravity. Clearly articulate the pronunciation at the end and release. [Speak] Add voice to the whispering phrases from before.

Please ask the composer for performance materials and information. www.reimunakata.net