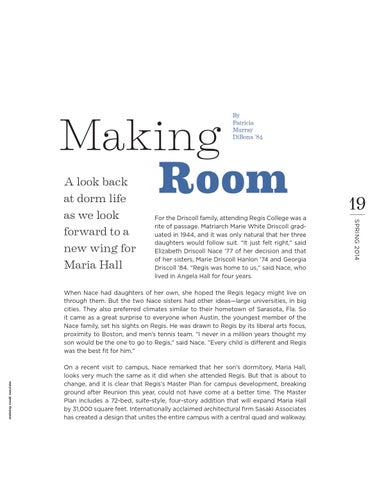 For the Driscoll family, attending Regis College was a rite of passage. Matriarch Marie White Driscoll graduated in 1944, and it was only natural that her three daughters would follow suit. “It just felt right,” said Elizabeth Driscoll Nace ’77 of her decision and that of her sisters, Marie Driscoll Hanlon ’74 and Georgia Driscoll ’84. “Regis was home to us,” said Nace, who lived in Angela Hall for four years.

When Nace had daughters of her own, she hoped the Regis legacy might live on through them. But the two Nace sisters had other ideas—large universities, in big cities. They also preferred climates similar to their hometown of Sarasota, Fla. So it came as a great surprise to everyone when Austin, the youngest member of the Nace family, set his sights on Regis. He was drawn to Regis by its liberal arts focus, proximity to Boston, and men’s tennis team. “I never in a million years thought my son would be the one to go to Regis,” said Nace. “Every child is different and Regis was the best fit for him.”

On a recent visit to campus, Nace remarked that her son’s dormitory, Maria Hall, looks very much the same as it did when she attended Regis. But that is about to change, and it is clear that Regis’s Master Plan for campus development, breaking ground after Reunion this year, could not have come at a better time. The Master Plan includes a 72-bed, suite-style, four-story addition that will expand Maria Hall by 31,000 square feet. Internationally acclaimed architectural firm Sasaki Associates has created a design that unites the entire campus with a central quad and walkway.