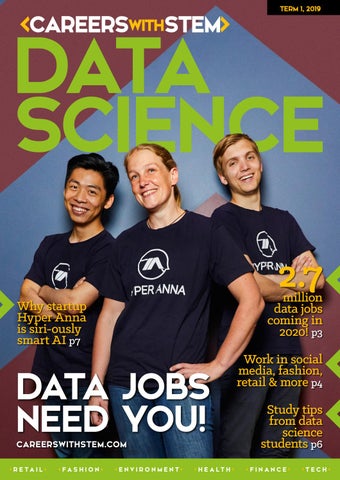 The challenge of data driven decision-making demands new skills across computer science, statistics and social sciences. The Bachelor of Applied Data Analytics degree has applications across business, finance and health through to national security.

See a world of possibility.

, to make businesses boom Big data has the potential rbon emissions – if only we prevent disease and cut ca to get the job done had enough data scientists billion

data is everywhere and has the potential to revolutionise every industry. The only thing lacking are the actual data scientists

Data isn’t just produced by social media or on you r smart phone. It’s everyw here, and it has the potent ial to revolutionise every ind ustry. The on ly thing lacking is the act ual dat a scientists to pu ll it off . A report from PwC predic ts that by the year 2020, 2.7 mi llion new data and analy tics jobs wil l be created. However, it’s est imated that 40% to 60% of current data jobs aren’t even being filled. Today’s data scientists are reaping the rewards of the shortfa ll, wit h gra duates able to expect starting salaries of $61,00 0+. And it on ly gets bet ter ! More experienced data scientists are taking hom e salaries up to $135,000 per year. Data analysts can pocket up to $98,000 per year, and data engineers are earning up to $125,0 00.

If you’re not fazed by the mind-boggling statistics in this article, then data science might just be the career for you. So what, beyond maths and code, do you need to brush up on to be a successfu l dat a scientist? Creative think ing and communication ski lls are vital for sifting through masses of data to discover meaning ful pat terns, and communic ate their significance effect ively. You cou ld be working in business to analyse market trends and develo p the next hot tech craze. Using satellite imagery to identify and combat the most harmf ul industry emissions contributing to climate change. Or even analysing the gameplay of mi llions of app users to identify early warning signs of dementia7. Whatever avenue you cho ose, get ready to ma ke a big difference wit h big data. – Eliza Brockwell

What do data scientists do?

re at numbers all day, Graduates are lining up to sta and we can totally see why

Crusin the socials for stats!

Jared Wong, data analyst at social tech company Digivizer Daily to-dos: “I build reports on real-time dashboards to help businesses see where their investment in digital marketing is succeeding. It’s a lot of extracting data, analysing trends, strategy meetings and presenting results!” The fun stuff: “Basically my job is to read tweets, explore Instagram and watch YouTube! My friends are jealous.” Making a difference: “Data experts take the guesswork out of making business decisions, so we’re in high demand!”

stakeholders Daily to-dos: “Meeting with we s and brainstorming on how challenges for the busines s.” blem pro e solv to es techniqu can use machine-learning store a into k wal to ling fee g The fun stuff: “It’s an amazin ” project I’ve worked on! and see an initiative from a in alytics is a game-changer “An : Making a difference can and w their customers retail! Businesses who kno that are relevant to them are ts duc pro match them with panies who provide exactly more successful than com ers.” the same offers to all custom

shopping superhero! Kshira Saagar, head of analytics and data science at e-retailer The Iconic Daily to-dos: “Sixty-two per cent of my time goes into solving business user problems, 23% into working with the team to unblock existing roadblocks and 15% into talking to the wider business about how we can make our customers’ lives better with data!” The fun stuff: “People often assume that anyone heading a department would just be sending out a bunch of emails, but it’s actually really hands-on! There’s a lot of writing code, getting down and dirty with data and learning new techniques like a beginner every day!” Making a difference: “One of the biggest levers businesses can use is data – on what customers want, do and say – so they can serve people better, faster and in a more seamless fashion.”

>DATA SCIENCE+ANU< What kind of places em ploy them? All kinds – yep, even the fun one s! Netfli x, Buzzfeed, Facebook, ASOS and Ap ple all employ data scientists to uncover the kinds of things that we wa nt to see/read/ buy. A data scientist might eve n be behind the decision to renew your favourite show for another season , those ads that keep popping up on your FB feed or the reason that the dress you love is now on sale! Do you get paid much? Yep, a lot. Graduates fresh from universit y can be paid up to the $100,000 range, wit h sea soned data scientists expecting closer to $150,0 00 and up. Should you study? Data science is offered as a major at most universit ies wit hin other STEM (science, technolog y, eng ineering, maths) deg ree s. Look at courses like a Bac helor of Science, Advanced Computing, or Engineering. Post-g rad master’s deg rees in data science specifical ly, are a great way to specia lise too! – Cassie Steel

See more about a degree at MQ: bit.ly/MQThisismyUniVid

rom the environment to gaming, data is everywhere and Satwik Chodisetti is learning to solve real-world problems with it. Satwik, a student in the Macquarie University (MQ) Bachelor of IT (data science major), is excited to use his knowledge for good. “I believe that by choosing this course I’ll be able to help with different aspects of the world’s problems,” he says. Data scientists work in humanitarian aid, telecommunications, finance, and many other industries. They find patterns and predict trends to help people understand issues and make better decisions. Because the profession uses a mix of skills from IT, maths and statistics, the MQ course covers aspects of all of these disciplines. Satwik has just completed his second year. So far, he has studied database systems, programmed with Java and Python, and

learned statistical techniques and coding, using real data sets to tackle specific challenges. A course highlight was analysing data from one of his favourite games. Using various maps, he was able to pinpoint the most action-packed locations and gain a better understanding of the game world’s layout.

Data science majors have many career options. As well as data scientists, they have the knowledge to become data solutions managers, or analysts in areas such as market intelligence, information systems and business. Caitlin Apcar is another Bachelor of IT student who is combining her love of arts with data science units. “Macquarie allows you to study elective units outside your faculty. I’ve taken Japanese and psychology, so I won’t be a data scientist who only knows data science when I graduate!”

Caitlin says she assumed that once she graduated, she would work in a bank, or for an IT company, but she soon found that every business has data that needs to be analysed. “I could end up working for a fashion brand or a zoo! The amount of data we have now is so much more than there was even two years ago. It’s always changing and always evolving which means I’ll always have a job.” The MQ course also partners with industry to give students experience in a capstone project during their final year. Satwik has already connected with a data scientist who works in the environmental sector. “I think that’s a very big part – getting connected to people who know what they’re doing, so you know how to proceed,” he says. According to Satwik, it’s important not to pursue data science because it’s a buzz word right now. He says go for it if you like seeing patterns in numbers and, “Enjoy what you do.” – Nadine Cranenburgh and Eliza Brockwell

earch, blem is. Talk to people, res “First identify what the pro can do you work towards that goal.” If figure out nex t steps, and eers. car IT of ty in good stead for plen that, says Christine, you’re lyse ana and s, and test hypothese Christine learned to create rted with science, but biology. She sta a dat g dyin data sets not by stu lar biology nce and a diploma in molecu a degree in computer scie versity of systems biology at the Uni before completing a PhD in es and how uld teach you methodologi Cambridge. “Studying sho more areas ’ll be equipped to work in to solve problems, then you ,” she says. than just what you studied skillset. e is constantly evolving her Even at Hyper Anna, Christin dually gra has and , acing consultant role She started out in a client-f ply sim – g nin lear e king in machin transferred her skills to wor that needed solving. s blem pro by picking up new of learning,” she says. “It’s one “I’m moving along, I’m still ell ckw Bro a Eliz – .” ure rtup cult the great benefits of a sta

e Seeliger t data scientist Dr Christin roblem solving is a skill tha sans h atc cook a meal from scr has in spades. She can also ’re all you kon hout a pat tern. Rec recipe and knit a jumper wit t. ntis scie a dat You might be a future over that kinda thing, too? sing ces pro ge gua lan l scenes in natura Christine works behind the nce llige inte l ficia arti t produces an at Hyper Anna; a startup tha ers h Hyper Anna, business own Wit cs. lyti ana ss tool for busine site web my ted visi rs use ny ma as “How can type in a query, such der -un stand vers the goods with easy-to this month?” and Anna deli is one s up with innovative solution visuals and charts. Coming s on the daily. of the top skills Christine use rs that had is questions from use ve we’ s “One of the problem would na “An e. istin a sets,” says Chr were not directly in our dat Hyper the So, ” ry.’ sor tand you, I’m respond with ‘I don’t unders for look ld wou t tha tem sys gestions Anna team developed a sug . ults res the n ade ry to bro synonyms of the search que