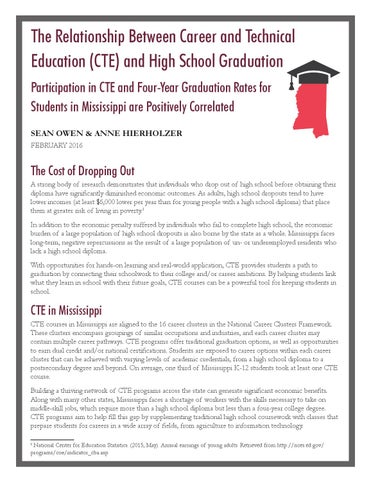 The Cost of Dropping Out A strong body of research demonstrates that individuals who drop out of high school before obtaining their diploma have significantly diminished economic outcomes. As adults, high school dropouts tend to have lower incomes (at least $6,000 lower per year than for young people with a high school diploma) that place them at greater risk of living in poverty.1 In addition to the economic penalty suffered by individuals who fail to complete high school, the economic burden of a large population of high school dropouts is also borne by the state as a whole. Mississippi faces long-term, negative repercussions as the result of a large population of un- or underemployed residents who lack a high school diploma. With opportunities for hands-on learning and real-world application, CTE provides students a path to graduation by connecting their schoolwork to their college and/or career ambitions. By helping students link what they learn in school with their future goals, CTE courses can be a powerful tool for keeping students in school.

CTE in Mississippi CTE courses in Mississippi are aligned to the 16 career clusters in the National Career Clusters Framework. These clusters encompass groupings of similar occupations and industries, and each career cluster may contain multiple career pathways. CTE programs offer traditional graduation options, as well as opportunities to earn dual credit and/or national certifications. Students are exposed to career options within each career cluster that can be achieved with varying levels of academic credentials, from a high school diploma to a postsecondary degree and beyond. On average, one third of Mississippi K-12 students took at least one CTE course. Building a thriving network of CTE programs across the state can generate significant economic benefits. Along with many other states, Mississippi faces a shortage of workers with the skills necessary to take on middle-skill jobs, which require more than a high school diploma but less than a four-year college degree. CTE programs aim to help fill this gap by supplementing traditional high school coursework with classes that prepare students for careers in a wide array of fields, from agriculture to information technology. National Center for Education Statistics. (2015, May). Annual earnings of young adults. Retrieved from http://nces.ed.gov/ programs/coe/indicator_cba.asp

Lingering misperceptions exist regarding the academic rigor and value of CTE courses. A 2012 research report from the RCU on public perceptions of CTE found that when asked to describe the type of students CTE benefits most members of the public described students who lack academic capacity, who are poor, or who are not college bound.2 However, CTE classes can play a valuable role in keeping a wide variety of students in school by providing hands-on learning experiences that clearly link the classroom with students’ future careers, thus boosting student engagement. Increasingly, national attention is focusing on the potential for CTE to play a powerful role in reducing high school dropout rates.

The Relationship Between CTE Participation and Graduation Rates

To better understand the link between participation in CTE and high school outcomes, the RCU undertook a study to explore the graduation rates of CTE students and examine student demographics and socioeconomic status in relation to CTE graduation rates.

This study was conducted using student-level data provided by the •  Transportation, Distribution, Mississippi Department of Education. The original study,3 from which &amp; Logistics many of the reported findings in this brief are drawn, focused on data from 15,470 students who entered secondary public schools in Mississippi during the 2007-2008 academic year. Data analysis on cohorts of students from the subsequent four academic years (i.e., 2008-2009, 2009-2010, 2010-2011, 2011-2012) is ongoing and is expected to be completed in early 2016. Mississippi Graduation Rates All

Mississippi CTE students have graduated at a rate of

or higher than average since 2009.

Black CTE2011-2012 students in Mississippi graduated at a rate of

â&amp;#x20AC;&amp;#x192; Graduation rates for career clusters were calculated by determining the graduation rates of every student in 2008-2015 who participated in a CTE class.

Overall, the four-year graduation rates for CTE students in Mississippi are higher than both the Mississippi overall average and the national average. Policy Implications Results from this study illustrate the positive correlation between CTE coursework and four-year graduation rates for students in Mississippi. In particular, Black CTE students experienced significantly higher on-time graduation rates. In light of these findings, policymakers should reconsider often-held perceptions that CTE students graduate at lower rates than students who are not enrolled in CTE courses. The data contained in this report is preliminary; additional research on this topic, including updated data for more recent cohorts, will be available in spring 2016. 2007-20085 Graduation Rates by Career Cluster 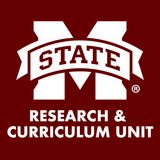