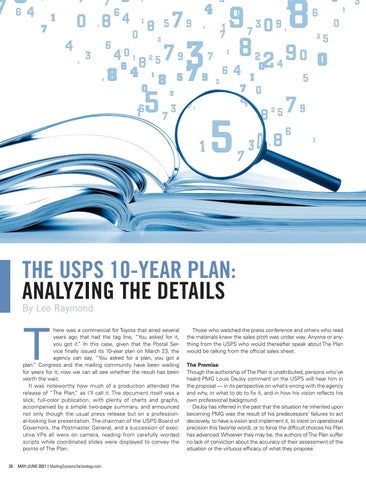 THE USPS 10-YEAR PLAN: ANALYZING THE DETAILS By Leo Raymond

here was a commercial for Toyota that aired several years ago that had the tag line, “You asked for it, you got it.” In this case, given that the Postal Service finally issued its 10-year plan on March 23, the agency can say, “You asked for a plan, you got a plan.” Congress and the mailing community have been waiting for years for it; now we can all see whether the result has been worth the wait. It was noteworthy how much of a production attended the release of “The Plan,” as I’ll call it. The document itself was a slick, full-color publication, with plenty of charts and graphs, accompanied by a simple two-page summary, and announced not only though the usual press release but on a professional-looking live presentation. The chairman of the USPS Board of Governors, the Postmaster General, and a succession of executive VPs all were on camera, reading from carefully worded scripts while coordinated slides were displayed to convey the points of The Plan.

Those who watched the press conference and others who read the materials knew the sales pitch was under way. Anyone or anything from the USPS who would thereafter speak about The Plan would be talking from the official sales sheet. The Premise Though the authorship of The Plan is unattributed, persons who’ve heard PMG Louis DeJoy comment on the USPS will hear him in the proposal — in its perspective on what’s wrong with the agency and why, in what to do to fix it, and in how his vision reflects his own professional background. DeJoy has inferred in the past that the situation he inherited upon becoming PMG was the result of his predecessors’ failures to act decisively, to have a vision and implement it, to insist on operational precision (his favorite word), or to force the difficult choices his Plan has advanced. Whoever they may be, the authors of The Plan suffer no lack of conviction about the accuracy of their assessment of the situation or the virtuous efficacy of what they propose.