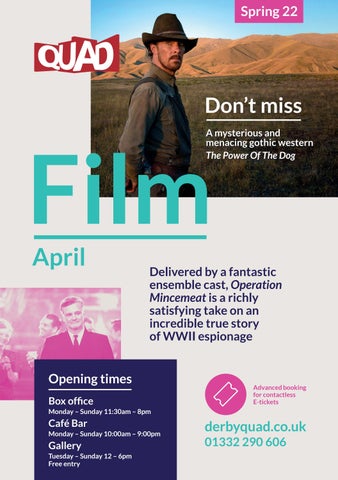 Delivered by a fantastic ensemble cast, Operation Mincemeat is a richly satisfying take on an incredible true story of WWII espionage

The Worst Person In The World 1 – 8 April Norway 2022 128 mins Dir: Joachim Trie The film revolves around Julie (Reinsve), a vibrant and impulsive young woman who, on the verge of turning thirty, is faced with a series of drastic choices. Julie navigates multiple love affairs, existential uncertainty and career dissatisfaction as she slowly starts deciding what she wants to do, who she wants to be with, and ultimately who she wants to become.

Bored by the daily tedium of her office job, Kate (Ruth Wilson) is sleepwalking through life when a chance sexual encounter with a charismatic stranger (Tom Burke) awakens her. High on infatuation and the exhilaration of this new relationship and hoping he will provide the escape she so desperately desires, she embarks on an emotionally dangerous journey that slowly begins to consume her.

1956: Former Savile Row tailor Leonard (Mark Rylance) finds himself in Chicago after a personal tragedy. Running a small shop in a rough part of town, his beautiful bespoke suits, catch the eye of the only people around who can afford them: a family of gangsters. Leonard tries to turn a blind eye to their criminality, but as they begin to take advantage. Leonard and his assistant find themselves embroiled deeper than they could ever have imagined.

All I Can Say The Power Of The Dog

8 – 14 April New Zealand / Australia 2021 127 mins Dir: Jane Campion Charismatic rancher Phil Burbank (Benedict Cumberbatch) inspires fear and awe in those around him. When his brother brings home a new wife (Kirsten Dunst) and her son (Kodi Smit-McPhee), Phil torments them until he finds himself exposed to the possibility of love. With a brilliant score by Jonny Greenwood (Radiohead) the film also won an Oscar for Best Director. &quot;Campion remains a master of sensory storytelling, delivering a scorching study of masculinity rooted in fear.&quot; - Empire Magazine

8 – 14 April USA 2022 101 mins Dir: Danny Clinch, Taryn Gould, Colleen Hennesy and Shannon Hoon Shannon Hoon, lead singer of the rock band Blind Melon, filmed himself religiously from1990-1995 with a video camera, recording up until a few hours before his sudden death at the age of twentyeight. His camera was a diary and his closest confidant. In the hundreds of hours of footage, Hoon meticulously documented his band’s rise to fame.

15 April at 8:30pm Taiwan 1981 86 mins Dir: Chang Hsin-Yi There’s nothing like Thrilling Bloody Sword, a head-spinning slice of Taiwanese psychotronic cinema that builds a fantasy action movie out of Snow White and the Seven Dwarfs, impossible fight scenes, and a cavalcade of monsters that include a cyclops, a pterodactyl and Satan himself!

A comet impregnates a queen. She gives birth to a fleshy egg. In disgust, the king tosses the egg in the river. Seven little people stumble onto the egg. They stab it with a knife and find a cute baby inside - who grows up to be a beautiful princess. One day, she runs into a prince fighting a multi-headed dragon, and of course, the two royals fall in love. Unfortunately, a group of dastardly wizards want to keep them apart, and they’ll use every creature at their disposal to do it. Satori Screen is proud to present what might just be the UK premiere of this fantastic example of international cult genre cinema, just 41 years after it was made.

All aboard for Finnish director Juho Kuosmanen’s follow-up to The Happiest Day in the Life of Olli Mäki: a witty, booze-fuelled train journey in a ‘90s Russian winter which sees two unlikely people forced into close quarters. Sweet-natured Finnish archaeology student Laura (Seidi Haarla) is travelling from Moscow to Murmansk to view the region’s mysterious ancient petroglyphs. On an uncomfortable train in the freezing cold, she finds that she must share compartment no 6 with gruff Russian miner Vadim (Yuri Borislov). Yet somehow, the hostility between them begins to thaw.

Director Robert Eggers has channelled the success of his films The Witch and The Lighthouse into this epic Viking Revenge saga that explores how far a Viking prince will go to seek justice for his murdered father. Alexander Skarsgard stars as Amieth the Viking Prince alongside Nicole Kidman, Claes Bang, Anya Taylor-Joy, Ethan Hawke, Willem Dafoe and Bjork.

Onoda: 10,000 Nights In The Jungle (S) 22 – 28 April France / Japan 2022 166 mins Dir: Arthur Harar Japan, 1944. Trained for intelligence work, 22-yearold Hiroo Onoda discovers a philosophy contrary to the official line: no suicide, stay alive whatever happens, the mission is more important than anything else. Sent to Lubang, a small island in the Philippines, his role will be to wage a guerrilla war until the return of the Japanese troops.

Downton Abbey: A New Era From 29 April UK 2022 125 mins Dir: Simon Curtis The much-anticipated cinematic return of the global phenomenon reunites the beloved cast as they go on a grand journey to the South of France to uncover the mystery of the Dowager Countess’ newly inherited villa. All your favourites are back with new additions to the cast including Laura Haddock and Dominic West.

Fright Club ManFish 30 April at 8:30pm UK 2022 83 mins Dir: Marc Coleman When a humanoid sea creature washes up in Terry’s bleak life they quickly develop feelings for each other - But can Man love Fish, and will Terry’s older criminal brother get his hands on the creature before Terry can decide how he feels? A unique, quirky horror-comedy that highlight the great talent in the UK filmmaking scene.

Exhibition On Screen: Easter In Art 5 April at 7pm &amp; 7 April at 1pm 2020 86 mins The story of Christ’s death and resurrection has dominated western culture for the past 2,000 years. It is perhaps the most significant historical event of all time, as recounted by the gospels but, equally, as depicted by the greatest artists in history. From the triumphant to the savage, the ethereal to the tactile, some of western civilization’s greatest artworks focus on this pivotal moment. This beautifully crafted film explores the Easter story as depicted in art, from the time of the early Christians to the present day. Shot on location in Israel, the United States and throughout Europe, the film explores the different ways artists have depicted the Easter story through the ages, and in doing so they capture a vital part of the history and culture of the past 2,000 years.

Kit Harington (Game of Thrones) plays the title role in Shakespeare’s thrilling study of nationalism, war and the psychology of power. Fresh to the throne, King Henry V launches England into a bloody war with France. When his campaign encounters resistance, this inexperienced new ruler must prove he is fit to guide a country into war. Captured live from the Donmar Warehouse in London, this exciting modern production is directed by Max Webster (Life of Pi).

THIS MUCH I KNOW TO BE TRUE

11 May at 8pm UK/Australia 2022 105 mins Dir: Andrew Dominik Shot on location in London &amp; Brighton, Andrew Dominik’s new feature documentary captures Nick Cave and Warren Ellis’ exceptional creative relationship as they bring to life the songs from their last two studio albums, Ghosteen (Nick Cave &amp; the Bad Seeds) and Carnage (Nick Cave &amp; Warren Ellis).In this document of their first ever performances of these albums, filmed in spring 2021 ahead of their UK tour, we see the two, accompanied by singers and string quartet.

2 &amp; 3 April / UK 2015 82 mins Dir: Mark Burton &amp; Richard Starzak Shaun is a clever, mischievous sheep who lives with his flock on Mossy Bottom Farm. Life on the farm has got into a bit of a rut, and Shaun concocts a cunning plan - to have a day off. Events rapidly escalate out of control and Shaun’s mischief inadvertently leads to the hapless farmer being taken away from the farm and into the Big City. With the flock’s help, Shaun must leave the farm for the first time in order to rescue The Farmer. But how will the sheep survive?

Sonic The Hedgehog 2 8 – 21 April USA 2022 122 mins Dir: Jeff Fowler After settling in Green Hills, Sonic (Ben Schwartz) is eager to prove he has what it takes to be a true hero. His test comes when Dr. Robotnik (Jim Carrey) returns, this time with a new partner, Knuckles (Idris Elba), in search for an emerald that has the power to destroy civilizations.

30 April &amp; 1 May Germany 2022 76 mins Dir: Ute von Munchow-Pohl Peter Rabbit meets Monsters University in the exciting new animated feature Rabbit Academy. This vibrant and colourful family adventure follows Max, the first city rabbit to be chosen in the master class for Easter Rabbits. Now Max and his friends must find their very own super-power to protect Easter. The unthinkable happens when insidious rabbit Leo begins conspiring with the foxes and schemes to destroy all eggs. Will Rabbits Max, Emmy and their friends manage to stop him?

QUAD Player QUAD has introduced its very own streaming platform which is available for anyone to use via the QUAD website. You can now rent films from our specially curated selection, to watch in the comfort of your own home. There is no joining or subscription fee, and better still, part of the revenue from each rental comes directly back to QUAD.

Film screenings every weekend and during school holidays.

Shaun The Sheep The Movie

Support QUAD Share the inspiration Films are available to rent, for up to seven days and from just £3.49, and include titles recently screened in QUAD as well as classics and special selections. Films currently available include Belfast, The Courier, Boiling Point, The Father, Promising Young Woman, Rocketman, Sicario, Military Wives and The Last Bus, alongside classics like The Outsiders, Passport To Pimlico and The Third Man. Recently added titles includes ‘Exhibition on Screen’ favourites: Frida Kahlo, I, Claude Monet, Leonardo - The Works, Rembrandt and Vincent Van Gogh - A New Way of Seeing.

FORMAT is organised by QUAD in partnership with the Digital and Material Artistic Research Centre (DMARC), University of Derby. FORMAT22 Presents includes a range of talks and events; please check our website for details.

QUAD is Derby's centre for art and film. Find out what films are coming to our cinema screens in April 2022. 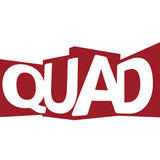