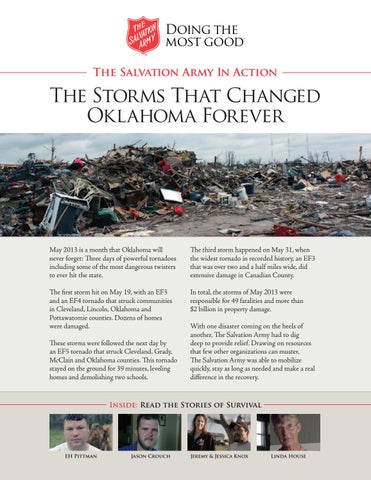 The Salvation Army In Action

May 2013 is a month that Oklahoma will never forget: Three days of powerful tornadoes including some of the most dangerous twisters to ever hit the state.

The third storm happened on May 31, when the widest tornado in recorded history, an EF3 that was over two and a half miles wide, did extensive damage in Canadian County.

The first storm hit on May 19, with an EF3 and an EF4 tornado that struck communities in Cleveland, Lincoln, Oklahoma and Pottawatomie counties. Dozens of homes were damaged.

In total, the storms of May 2013 were responsible for 49 fatalities and more than $2 billion in property damage.

These storms were followed the next day by an EF5 tornado that struck Cleveland, Grady, McClain and Oklahoma counties. This tornado stayed on the ground for 39 minutes, leveling homes and demolishing two schools.

Inside: Read the Stories of Survival

What did the Salvation Army do? 389,037 meals, drinks and snacks served Emergency financial aid to 31,208 people 28,891 hours of employee and volunteer service Emotional and spiritual care to survivors and first responders 1,107 cases open for long-term recovery, 1,589 cases closed — all in coordination with Oklahoma Disaster Recovery Project (ODRP)

After serving in Afghanistan, EH Pittman would face his most dangerous mission at home. As the sirens sounded, EH gathered customers into the bathroom of a convenience store and used his body to shield a mother and child. After the storm, his back broken, he still helped guide rescuers through the rubble. The Salvation Army is helping fund an all-terrain wheelchair for this hero.

“With The Salvation Army, it’s in their human nature to help people.”

Jason’s family lost their home in the devastating Moore tornado in 1999 and were struck again in 2013. Losing everything twice was difficult for everyone, but Jason’s children were hit especially hard. The Salvation Army made sure the children had what they needed to begin the recovery.

“A tornado doesn’t care how much money you make. It tattoos a place.” – Jason Crouch

In a single storm, Jeremy and Jessica Knox lost their home, their business and several of their pets. With the help of friends, neighbors, family and The Salvation Army, they’re in a new home and the business is running again.

“I began giving up. The Salvation Army let me know there is still good out there.” – Jeremy Knox

Taking cover in the home she grew up in, Linda House never believed she would lose everything. But in a few minutes she watched her entire life being swept away by a tornado. The Salvation Army bought Linda a new home and furnishings.

“The Salvation Army goes above and beyond. They don’t put you in a place and go away. They keep checking on you.” – Linda House

To view the stories of survival, please visit youtube.com/user/SalvationArmyUSA

The Recovery Continues When disaster strikes, The Salvation Army mobilizes its forces to begin the process of helping people recover. An ongoing presence in nearly every ZIP code in the country and years of experience in dealing with disasters give The Salvation Army unique skills in getting services to the people who need them and putting volunteers to work in the most effective ways. This level of commitment also means the Army will continue with the long-term recovery for as long as it takes. Impressive as the Army’s resources are, they can’t do it alone. The Salvation Army works closely with corporate partners, community organizations and nonprofit agencies.

Following the 2013 storms, The Salvation Army also became a founding member of the Oklahoma Disaster Recovery Project (ODRP), a multi-agency case management partnership to help administer long-term aid. Disasters may happen in mere minutes, but their effects can linger forever. That’s why The Salvation Army’s recovery efforts don’t stop with immediate disaster relief. We stay connected to the families we serve and continue to serve them — especially the poorest and most vulnerable people, who often spend the next decade trying to recover. The Salvation Army will be there for as long as they need us.

Tornado “watch,” “warning” and “siren” During a severe weather event, things happen fast. Here is the difference between a tornado watch and a tornado warning and what you should do.

Tornado Watch This means conditions are conducive to tornadoes developing in your area. If you have not already prepared your safe area or tornado shelter, do so now.

Tornado Warning A tornado has been spotted in the area. Take cover immediately. If possible, cover yourself with a mattress or a sturdy piece of furniture.

Tornado Siren Stay under cover until the all clear is sounded. Even if the siren stops, you may not be out of danger — a tornado could have damaged the siren.

Help us be Ready Your Donation Makes a Difference

Helps feed a family of four.

Helps provide snacks and drinks for 125 survivors and volunteers.

Helps feed a survivor for a day.

Helps run a canteen (mobile feeding unit) for a day.

cents of every dollar to serve nearly 30 million people each year: disaster victims, the hungry, the disabled, the elderly and ill, the homeless and underprivileged children. Learn more at SalvationArmyUSA.org.

Ready to Do Your Part to Help? Call 1-800-SAL-ARMY Visit SalvationArmyUSA.org Mail your donation to The Salvation Army, PO Box 12600, Oklahoma City, OK 73157 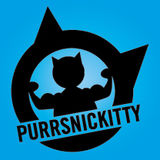