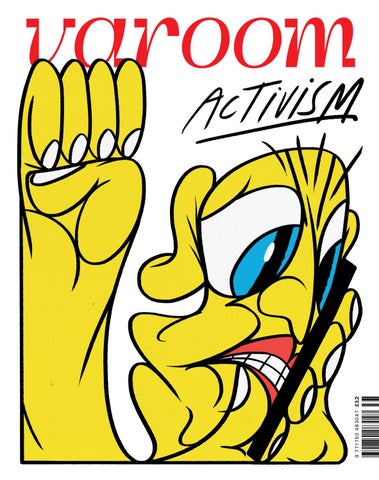 Want to be seen in the elusive US Market?

‘I’ Over ‘We’ The last decade has seen a period of unprecedented experimentation from comics creators working in North Africa and West Asia. Paul Gravett uncovers a new wave of Arab comics and meets Samandal, the collective battling state censorship and prosecution to tell their stories

Selling off Britainâ&#x20AC;&#x2122;s Green Belt is a contentious proposition, raising questions about the value of open space and its need for protection. Through an invented property company, illustrator Jon Halls opened up debate in person and online

Stake signs and hoardings announcing the sale and development of land are a familiar apparition in and around London. When Green Belt Properties announced ‘Land for sale’ on Hayes Common, a piece of woodland in the London Borough of Bromley, it seemed like any other announcement of a private deal made on public land. However, the scarlet signage and cordoned off areas were a piece of provocative fiction created by illustrator Jon Halls. Jon’s company was fictitious, but the issues its existence raised are all too real. Green Belts are planned and protected areas of countryside surrounding cities in the UK, intended to regulate urbanisation, provide city residents with space for leisure and safeguard biodiversity. These motivations may seem difficult to argue with, however, Green Belts that have been in existence since the mid-1950s have come under criticism in recent years. They have been blamed for blocking solutions to 21st century urban challenges, and in particular for contributing to inner-city housing crises while preserving the high prices of homes on the outskirts. Jon is well aware of this tension, and used his Green Belt Properties proposition to spark debate about the value of our green spaces. On greenbeltproperties.co.uk he asked: While Green Belt Properties is a fictional company and the land is not currently for sale, how safe is Hayes Common?

Progressive politics is at the heart of Indian publisher Tara Books â&#x20AC;&#x201C; from their feminist narratives to their championing of tribal art and the craft of book making. Founder Gita Wolf and artist Bhajju Shayam explain their process

Extracted from government data, statistics on society are the raw material for Mona Chalabiâ&#x20AC;&#x2122;s information graphics. Covering issues from wage inequality to abortion, the journalist and illustrator brings hidden associations to light

Printed images are still as relevant and potent as any graphics created digitally. As important as technology is in our society, print has a different currency – it can create impact independently, or combine with digital media to reach huge numbers of people. Eight months after the tragic Grenfell Tower fire that led to at least 72 deaths in a residential building in West London, Justice4Grenfell created a poignant campaign that made an impact in person and online. Taking inspiration from the 2017 film Three Billboards Outside Ebbing Missouri the group drove billboards mounted on lorries around London to highlight the lack of justice for victims and unresolved fire safety risks in other residential tower blocks. Their bold red signs with black, capitalised text were seen throughout the city, photographed and subsequently shared on social media, increasing the number of people who saw the campaign and raising greater awareness of the authorities’ alleged lack of action.

In some places, sharing political messages digitally allows for anonymity or reduces the risk of being arrested or condemned for expressing dissent. After the Chinese government vetoed an anti-sexual harassment ad campaign proposed by a group of feminist activists in 2017, one group member, Zhang Leilei, was brave enough to challenge the decision. She photographed herself holding posters from the campaign, acting as a human billboard in her hometown of Guangzhou and shared the images via social media. She was eventually stopped by authorities and told to leave her city, though some images remain in circulation online.

Your most recent research has focused on political graphics from the last decade. It’s a time in which the way that people become informed and respond to political and social issues has changed radically. How have activist graphics adapted to new platforms? Is print still a relevant medium for protestors?

Edel Roderiguez uses technology to give people access to his artwork. His anti-Trump illustrations are commissioned by magazines including TIME, The New Yorker and Der Spiegel - they are immediately recognisable as the controversial US president, using only one or two visual clues. They’re bold and stylised, and so they work as well for street protests as they do in magazines. Roderiguez makes his images available for download so that they can be shared and adopted by protestors across the world.

Illustrator Jean Jullien’s ‘Peace for Paris’ image – an immediate sketch made in response to the shocking attack at a concert in Paris in 2015 - is a symbol that demonstrates the speed at which technology can rapidly spread an image across the globe. The image was used by people to demonstrate empathy and solidarity, and translated into many different mediums. From tattoos to a configuration of candles and large-scale banners, the image no longer belongs to the artist: it has been adopted and taken beyond his reach.

Printed images are still as relevant and potent as any graphics created digitallyâ&#x20AC;Ś it can create an impact independently or combine with digital media to reach huge numbers of people

Yellowzine, now on its second issue, is a print zine with a growing online presence set up to highlight the practice of UK-based BAME visual artists. Co-founder and editor Aisha Ayoade introduces the first issue explaining that the magazine strives not only to make artists more visible, but to liberate minority ethnic artists from typecasting – ‘yes we do sometimes use art as a medium to explore our race and culture, but that’s not all we do’...‘We are a magazine fighting against tokenism and sidelining’, she says. Yellowzine’s first issue acts as a sourcebook of the work of twenty-four illustrators of colour. ‘We chose to do illustration for our first issue because it’s about self-definition’ Ayoade explains, ‘Illustration is an art form that rarely relies on other factors - aside from your tools, you have complete control over the style and outcome of your work.’

Hannah Ekua Buckman’s textural images with bold palettes are profiled in Yellowzine 1, and regularly appear in gal-dem to accompany articles on subjects from BAME characters in horror films to the difficulty of naming characters when writing for theatre. In her illustration for Hannah Hajee-Adam’s Struggling to articulate your experience as a PoC? It’s ok, me too, Buckman creates a triple portrait showing the path from contemplation to despair against an overwhelming blue background. Buckman experiences spaces run by and for marginalised people as ‘inspiring and validating’, and notes that ‘big companies are realising that diversity sells’ and that therefore it is ‘important to create and support independent platforms away from dominant power structures that centre oppressed people and aim to redistribute that power’.

Emily Jost, founder member of Artists Against Social Cleansing and Ian Whadcock, Senior Lecturer in Illustration with Animation at Manchester School of Art give their views on developer-led commissioning

Luxury property development is a lucrative industry, generating huge profits for investors and shareholders. Cities across the UK are seeing the construction of high-cost homes proliferating against a background of social and affordable housing shortage and the displacement of communities from newly ‘aspirational’ locations. As they transform urban sites, developers are employing strategies to engage with their existing surroundings. Increasingly, working with artists is one of them. By commissioning artists to create visual responses to locations and deliver workshops with local people, developers are attempting to bridge the gap between their business practices and communities, and simultaneously make their sites more desirable. Activism

Illustrators are ideal practitioners for these projects, which demand the ability to interpret environments and communicate with a broad audience. However, as new territories of site-specific installation and socially engaged practice open up to illustrators, so do a number of ethical questions. Developer-led arts projects have attracted controversy, with some commentators and artists criticising them as examples of corporate ‘artwashing’ – the use of art, artists and communities to camouflage socially irresponsible practices and increase private profit. Do collaborations with property developers offer valuable and mutually beneficial opportunities to creatives and communities? Or do they simply artwash actions that ultimately undermine the diversity of cities?

Right: Bradford Pit Project, Jacob Phillips, 2016 Part of a series based on the oral histories of ex-miners, proposed as part of a permanent sculptural memorial for a site in Manchester.

Varoom 38 the Activism issue Illustrators use their work to challenge, provoke and advocate on issues from the personal to the local to the global. Varoom’s new Editor, Olivia Ahmad has curated a fascinating selection of artwork and viewpoints for this Activism issue, from the Middle Eastern comics collective battling state censorship and prosecution to Tara Books feminist adaptations of traditional Indian stories. Varoom also talks to Jon Halls about his ‘property development company’ set up to advocate for the value of green spaces, Mona Chalabi on her drawn information data on issues like wage inequality, Seb Chaloner’s animations chucking a brick through the windows of exclusive members clubs and the Zines working to change underrepresentation in the publishing world. In ‘I’ Before ‘We’ Paul Gravett uncovers a new wave of Arab Comics and meets Samandal, the comics collective battling state censorship and prosecution to tell their stories, and activist Seth Tobocman discusses his comic on the transportation of fracked oil through Albany, New York and the housing projects residents fighting the dangers the occasionally exploding trains bring. Stuart Lang assesses how the credibility of brands can be in the balance when they adopt movements for equality and empowerment as part of their promotional activities, and the role graphics have played in protest and campaigns for change is examined by Margaret Cubbage. In Contested Spaces, a founder member of Artists Against Cleansing and an illustration lecturer give their views on developer-led commissioning – is it always artwashing? Cover illustration from Bráulio Amado, Illustrators use their work to challenge, provoke and advocate on issues from the personal to the local to the global. Varoom’s new Editor...

Illustrators use their work to challenge, provoke and advocate on issues from the personal to the local to the global. Varoom’s new Editor...