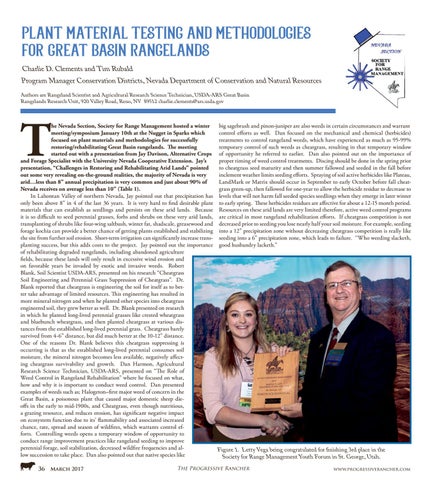 he Nevada Section, Society for Range Management hosted a winter big sagebrush and pinon-juniper are also weeds in certain circumstances and warrant meeting/symposium January 10th at the Nugget in Sparks which control efforts as well. Dan focused on the mechanical and chemical (herbicides) focused on plant materials and methodologies for successfully treatments to control rangeland weeds, which have experienced as much as 95-99% restoring/rehabilitating Great Basin rangelands. The meeting temporary control of such weeds as cheatgrass, resulting in that temporary window started out with a presentation from Jay Davison, Alternative Crops of opportunity he referred to earlier. Dan also pointed out on the importance of and Forage Specialist with the University Nevada Cooperative Extension. Jay’s proper timing of weed control treatments. Discing should be done in the spring prior presentation, “Challenges in Restoring and Rehabilitating Arid Lands” pointed to cheatgrass seed maturity and then summer fallowed and seeded in the fall before out some very revealing on-the-ground realities, the majority of Nevada is very inclement weather limits seeding efforts. Spraying of soil active herbicides like Plateau, arid…less than 8” annual precipitation is very common and just about 90% of LandMark or Matrix should occur in September to early October before fall cheatNevada receives on average less than 10” (Table 1). grass green-up, then fallowed for one-year to allow the herbicide residue to decrease to In Lahontan Valley of northern Nevada, Jay pointed out that precipitation has levels that will not harm fall seeded species seedlings when they emerge in later winter only been above 8” in 4 of the last 36 years. It is very hard to find desirable plant to early spring. These herbicides residues are affective for about a 12-15 month period. materials that can establish as seedlings and persists on these arid lands. Because Resources on these arid lands are very limited therefore, active weed control programs it is so difficult to seed perennial grasses, forbs and shrubs on these very arid lands, are critical in most rangeland rehabilitation efforts. If cheatgrass competition is not transplanting of shrubs like four-wing saltbush, winter fat, shadscale, greasewood and decreased prior to seeding you lose nearly half your soil moisture. For example, seeding forage kochia can provide a better chance of getting plants established and stabilizing into a 12” precipitation zone without decreasing cheatgrass competition is really like the site from further soil erosion. Short-term irrigation can significantly increase trans- seeding into a 6” precipitation zone, which leads to failure. ‘‘Who weeding slacketh, planting success, but this adds costs to the project. Jay pointed out the importance good husbandry lacketh.” of rehabilitating degraded rangelands, including abandoned agriculture fields, because these lands will only result in excessive wind erosion and on favorable years be invaded by exotic and invasive weeds. Robert Blank, Soil Scientist USDA-ARS, presented on his research “Cheatgrass Soil Engineering and Perennial Grass Suppression of Cheatgrass”. Dr. Blank reported that cheatgrass is engineering the soil for itself as to better take advantage of limited resources. This engineering has resulted in more mineral nitrogen and when he planted other species into cheatgrass engineered soil, they grew better as well. Dr. Blank presented on research in which he planted long-lived perennial grasses like crested wheatgrass and bluebunch wheatgrass, and then planted cheatgrass at various distances from the established long-lived perennial grass. Cheatgrass barely survived from 4-6” distance, but did much better at the 10-12” distance. One of the reasons Dr. Blank believes this cheatgrass suppressing is occurring is that as the established long-lived perennial consumes soil moisture, the mineral nitrogen becomes less available, negatively affecting cheatgrass survivability and growth. Dan Harmon, Agricultural Research Science Technician, USDA-ARS, presented on “The Role of Weed Control in Rangeland Rehabilitation” where he focused on what, how and why it is important to conduct weed control. Dan presented examples of weeds such as; Halogeton–first major weed of concern in the Great Basin, a poisonous plant that caused major domestic sheep dieoffs in the early to mid-1900s, and Cheatgrass, even though nutritious, a grazing resource, and reduces erosion, has significant negative impact on ecosystem function due to its’ flammability and associated increased chance, rate, spread and season of wildfires, which warrants control efforts. Controlling weeds opens a temporary window of opportunity to conduct range improvement practices like rangeland seeding to improve perennial forage, soil stabilization, decreased wildfire frequencies and alFigure 1. Letty Vega being congratulated for finishing 3rd place in the low succession to take place. Dan also pointed out that native species like Society for Range Management Youth Forum in St. George, Utah.  36 March 2017